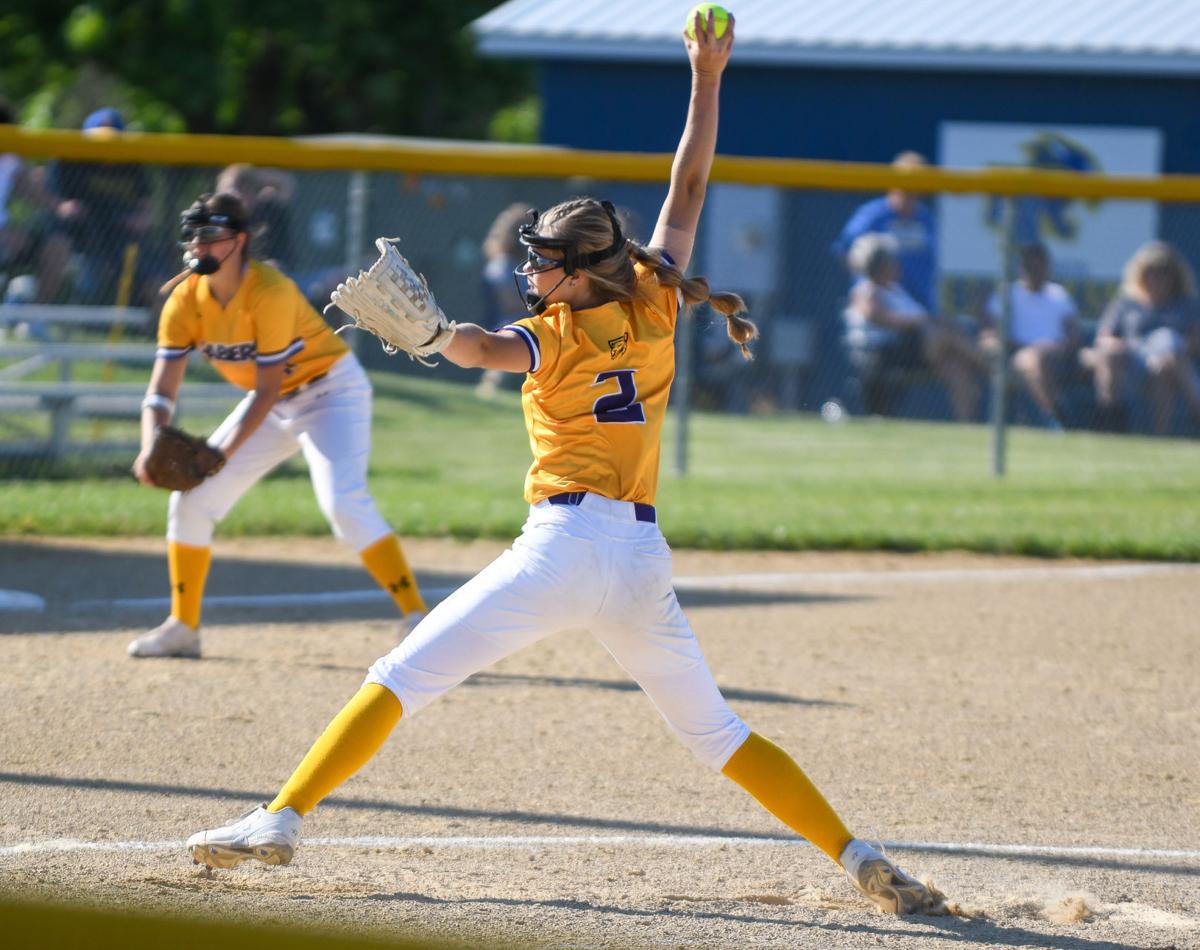 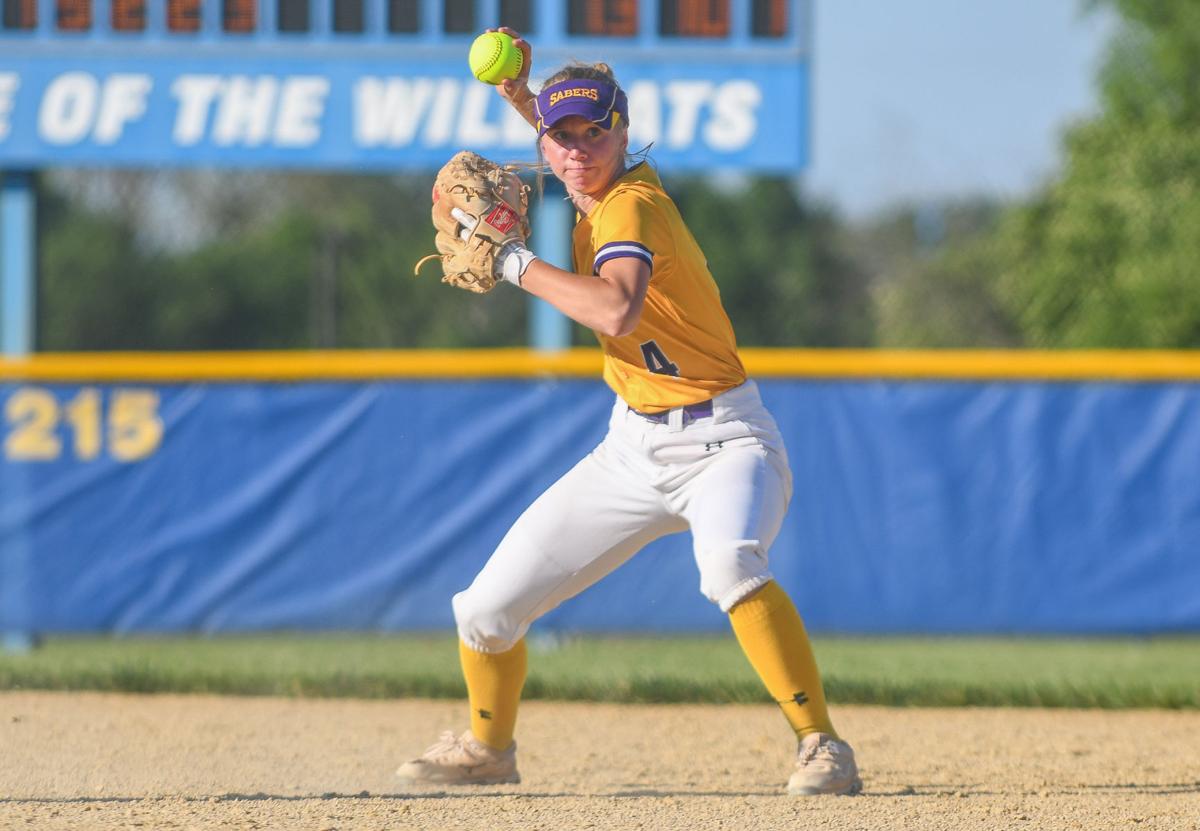 DAVENPORT – It wasn’t an easy night for the Central DeWitt softball team.

In a non-conference softball doubleheader with Davenport North, the Sabers added two losses to their early record thanks to a stale offense and some defensive holes. The team, which was ranked No. 15 in the preseason rankings, was coming off a season-opening split with Marion at home.

“North came to the plate every time and hit balls through us,” head coach Lee Swanson said. “They got the hits, and we left a lot of people on base, I know that much.”

The first game ended early in the bottom of the sixth inning with an RBI double extending the Wildcat lead to 14-4, the ten-run rule ending things.

The second game was back and forth for both teams, but the Sabers once again struggled to bring in late runs and ended with another loss, this one 4-3.

The Sabers held steady in the first inning of Game 1 behind pitcher Keeley Jansen, only allowing one run from the Wildcats, but saw things quickly spiral out of control.

The bases were loaded quickly to start the second inning, and a walk plated the first run. A screaming hit from North found the gap in right-center, bouncing off the wall and scoring three more wildcats. Eventually a fielder’s choice brought in the fifth run of the night and left the Sabers trailing 6-0.

“We had the bases loaded three times in two times and we never got that hit,” Swanson said. “They got that hit. That was right where they wanted to be in their lineup.”

On the other hand, the Sabers weren’t able to score until the fourth despite putting runners on nearly every inning. Their seven hits of the game only resulted in four runs, while the Wildcats’ 12 hits brought in 14.

“I think we were happy with contact tonight instead of hard contact. We went up there with the mindset that I’m not going to strike out instead of I’m going to hit a ball through you.”

Four fielding errors also felt like too many. There are some new faces filling in positions in the Saber defense, plus Swanson used four pitchers on the night to save some arms for the next two nights of games.

“We’re not going to strike out a lot of people so we have to play 21 outs,” Swanson said “And that’s 21 outs on defense. That’s hard. You don’t get to sit back and have a pitcher strike some people out. We’re young and we know we have to replace the corners, but we’re growing.”

Things looked different in the second half of the night, all around.

Even the energy in the dugout was different, as the Sabers got loud during each and every at-bat.

The Sabers had their chance near the end, loading the bases for the third time in the doubleheader. Talbot Kinney laid down a grounder and outran the throw to first to score one run and pull the Sabers within one, but they weren’t able to push any more across before the final out.

“We’re going to learn from it,” Swanson said.

After Alyssa Eden led off the game with a hit, she advanced on a bunt and then crossed home plate on a Talbot Kinney hit combined with a North error. That put the Sabers on the board first.

North responded immediately with a lead off double that came in later in the inning off a sac fly.

But this time around, the Sabers held their ground. The Wildcats scored again in the second inning but posted zeroes on the board for the next two. That let the Sabers tie things up in the top of the fifth.

Davenport North plated one more run in the bottom of the fifth to take the 3-2 lead and added one more to it in the sixth holding off the Sabers at the plate the rest of the evening.

The Sabers (1-3) play their third doubleheader in as many days Wednesday night, heading back home to welcome conference opponent Vinton-Shellsburg. They wrap up a four-game week on Thursday with a home pair of game against Maquoketa.

TIFFIN – The Clinton River Kings picked up a second hard-fought win on Tuesday night, taking down Clear Creek Amana 8-7 in a non-conference game on the road.

The River Kings plated the first two runs of the game but watched the Clippers score four unanswered to take the lead. The Kings put together a four-run fifth innings to take the lead once again and held it until the final out.

The top of the roster dominated, the first three batters all picking up two hits a piece (Joe Simpson, Addison Binnie and Max Holy), along with Jasper Luckritz down the line. Binne, a freshman, drove in two runs.

Jace Howard took the first four innings for the River Kings on the mound, only allowing two earned runs to cross in his time with the ball. Casey Shannon also pitched three innings.

The River Kings are back in action on Thursday, returning to Mississippi Athletic Conference play with a doubleheader against Davenport Assumption on the road.