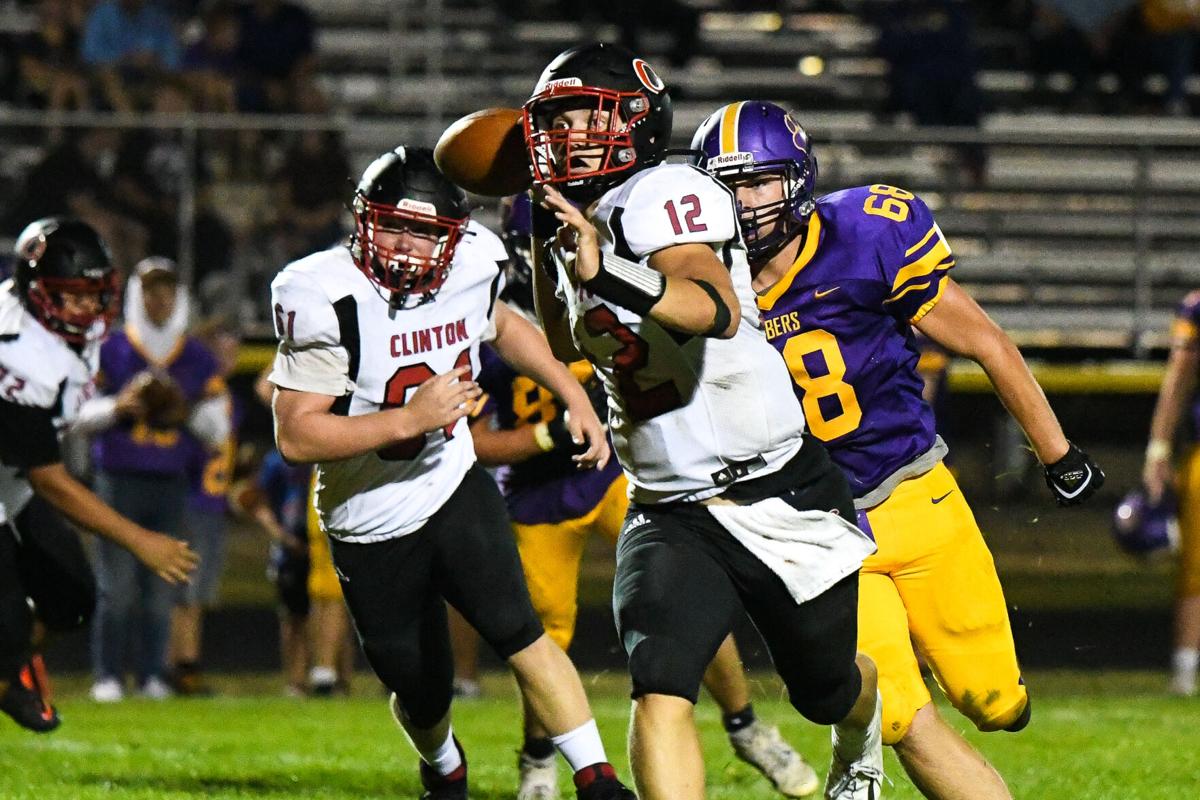 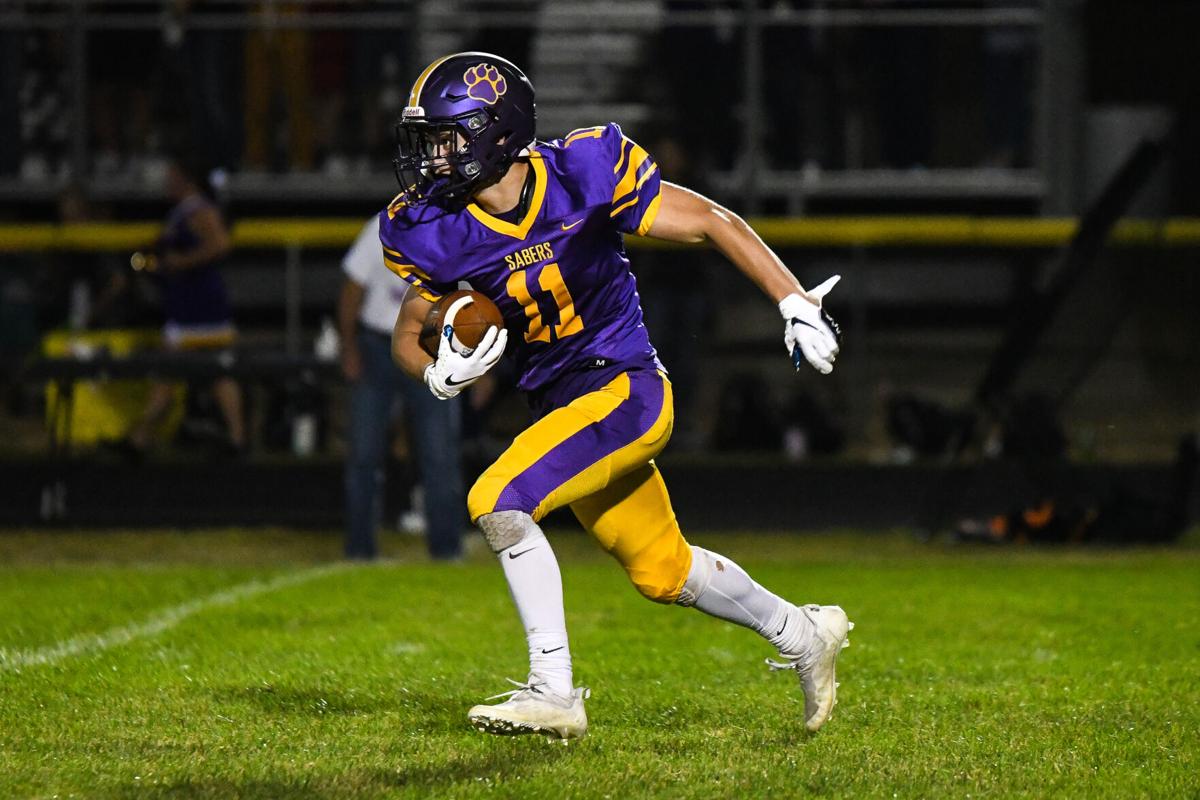 Central DeWitt’s Caden Ridgely makes a run on a kickoff for the Sabers during their 44-28 victory over Clinton on Friday night. 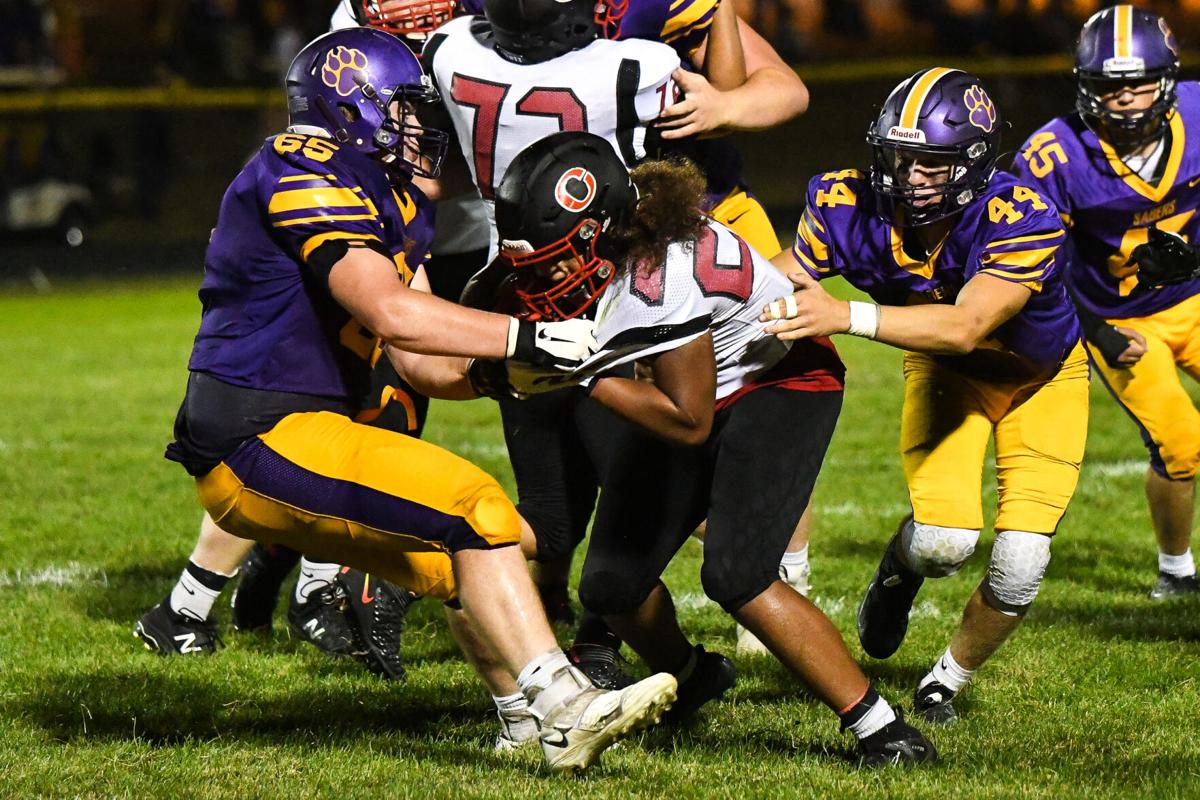 Clinton running back AJ Russell is collapsed on by Central DeWitt’s Sam Gravert and Cael Grell during the Sabers’ 44-28 win over the River Kings Friday night in DeWitt.

Central DeWitt’s Caden Ridgely makes a run on a kickoff for the Sabers during their 44-28 victory over Clinton on Friday night.

Clinton running back AJ Russell is collapsed on by Central DeWitt’s Sam Gravert and Cael Grell during the Sabers’ 44-28 win over the River Kings Friday night in DeWitt.

DEWITT – A few second half blunders kept the Clinton River Kings from their first win Friday night, and instead the Central DeWitt Sabers got a 44-28 victory at home to stay perfect on the year.

“We made some mistakes at some inopportune times,” Clinton head coach Nate Herrig said. “That’s part of it. We try to teach these guys life lessons and tonight was one of those, that if you don’t stay at it all night long, you’re going to hit some bumps along the road.”

A game that was tied at halftime fell out of reach for Clinton quickly in the third quarter. DeWitt quarterback Paul Kuehn found Lucas Burmeister downfield for a long pass play that put the Sabers within striking distance on the first drive. Ben Pace ran it up the middle a few plays later to give the Sabers their second lead of the game. They never relinquished that lead.

Right after that, a bad bounce on a kickoff ended up loose and the Sabers came up with the ball. A scoop from Kuehn to Burmeister put DeWitt up by double digits.

The Kings did cross into the endzone one more time. Ajai Russell came up with a fumble recovery early in the fourth quarter. A big pass play to Zach Connell from Jai Jensen put the River Kings in Saber territory.

Jensen ran the ball a couple times himself, scoring on the quarterback keep.

It was the River Kings who struck first, though. Clinton scored on a pass play early and completed the two-point conversion.

“That first score was big for us,” Herrig said. “They wanted the ball and I saw screw it, let’s run down and score, and they did. We responded well, we did some nice things and we got after it.”

The Sabers answered with a TD of their own, but even then Clinton put points across the board.

For the Sabers, it’s not their first dog fight of the season. The first three games have come down to the fourth quarter and each time DeWitt has pulled out a win.

“I almost think that we’re so young that we don’t realize the situation,” head coach Ryan Streets said. “There’s times we’re down on the endzone and we don’t score. We let teams get back into the games.

“We played 48 minutes. We played the whole game hard and that was really good to see. No let ups, and we were lucky to come out on top.”

It wasn’t without a fight on Friday night, either. The River Kings had Ajai Russell in the running back spot for the first time this season and Russell impressed.

“We’ve been trying to work him back there,” Clinton’s Herrig said. “He does some nice things, he runs hard, he finishes moving forward and that’s something we’ve been lacking a little bit.”

“Clinton really took advantage of our outside linebackers,” Streets said. “They made them play in space. The quarterback (Jai Jensen) did a really nice job, he was elusive. WE thought we had them and we didn’t.

“Their runningback (Ajai Russell) ran really hard, we had a hard time tackling him. He is very good.”

The Sabers also had moments where they couldn’t capitalize on field position. The Clinton defense kept them off the board a few times when it looked like scoring was inevitable.

“I liked their intensity,” Herrig said of the River King defense. “[Central DeWitt has a] tough offense to defend. We had to prepare for a lot of different things this week. I thought we showed up prepared and they were ready to get after it. We just didn’t make the plays at times when we needed to.”

The Sabers’ last touchdown looked like it wasn’t going to happen for a moment, with Clinton making multiple stops within six yards of the goal line. Gerard punched it up the middle to round out the DeWitt scoring for the night.

The Sabers worked the rushing game for a lot of the competition. Gerard had a few runs up the gut and Ben Pace scored three rushing touchdowns and four two-point conversions for the Sabers. He had all 22 points in the first half.

“We’ve done a nice job of running the ball on the ground,” Streets said. “Last week against Camanche, we struggled, they shut us down a little bit and we had to throw the ball a little more but we fixed those problems in practice and it went well.”

Central DeWitt (3-0) will go on the road after two weeks in a row at home, playing Marion in Week 4.

Clinton (0-3) will host Maquoketa next Friday at Coan Field.