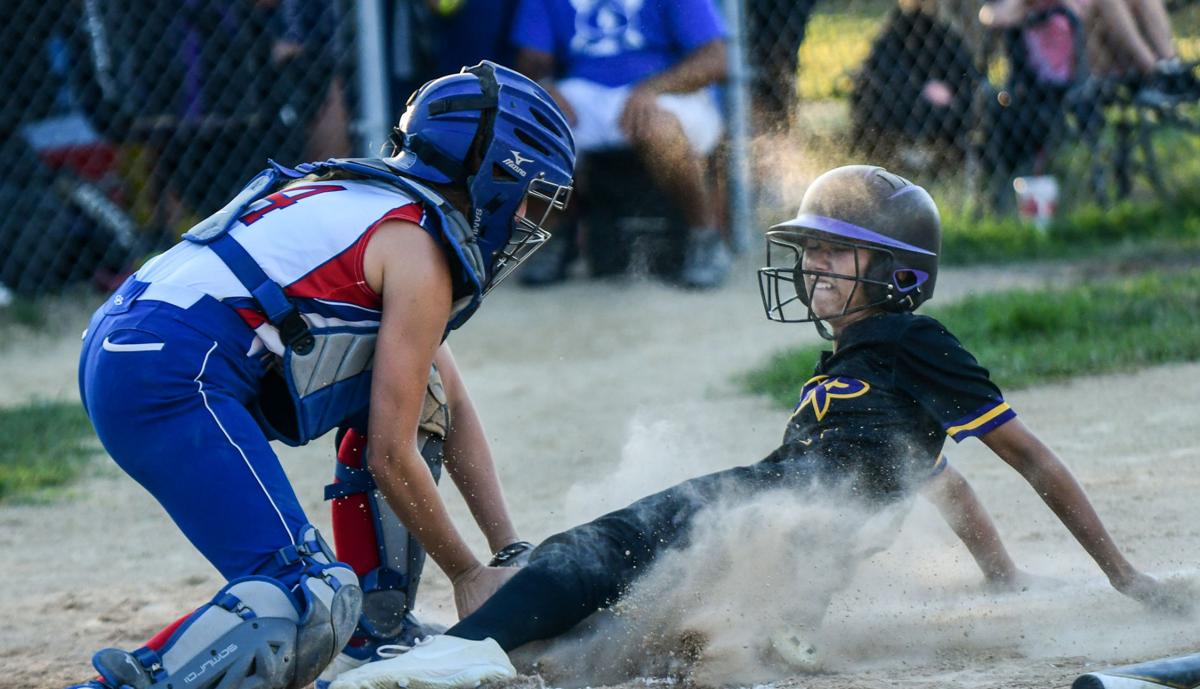 Central DeWitt’s Lily Fulsang attempts to score on a slide into home while Camanche catcher Aubrey Carstensen tags her out during the non-conference softball game in Camanche on Monday. Central DeWitt took the win 6-5. 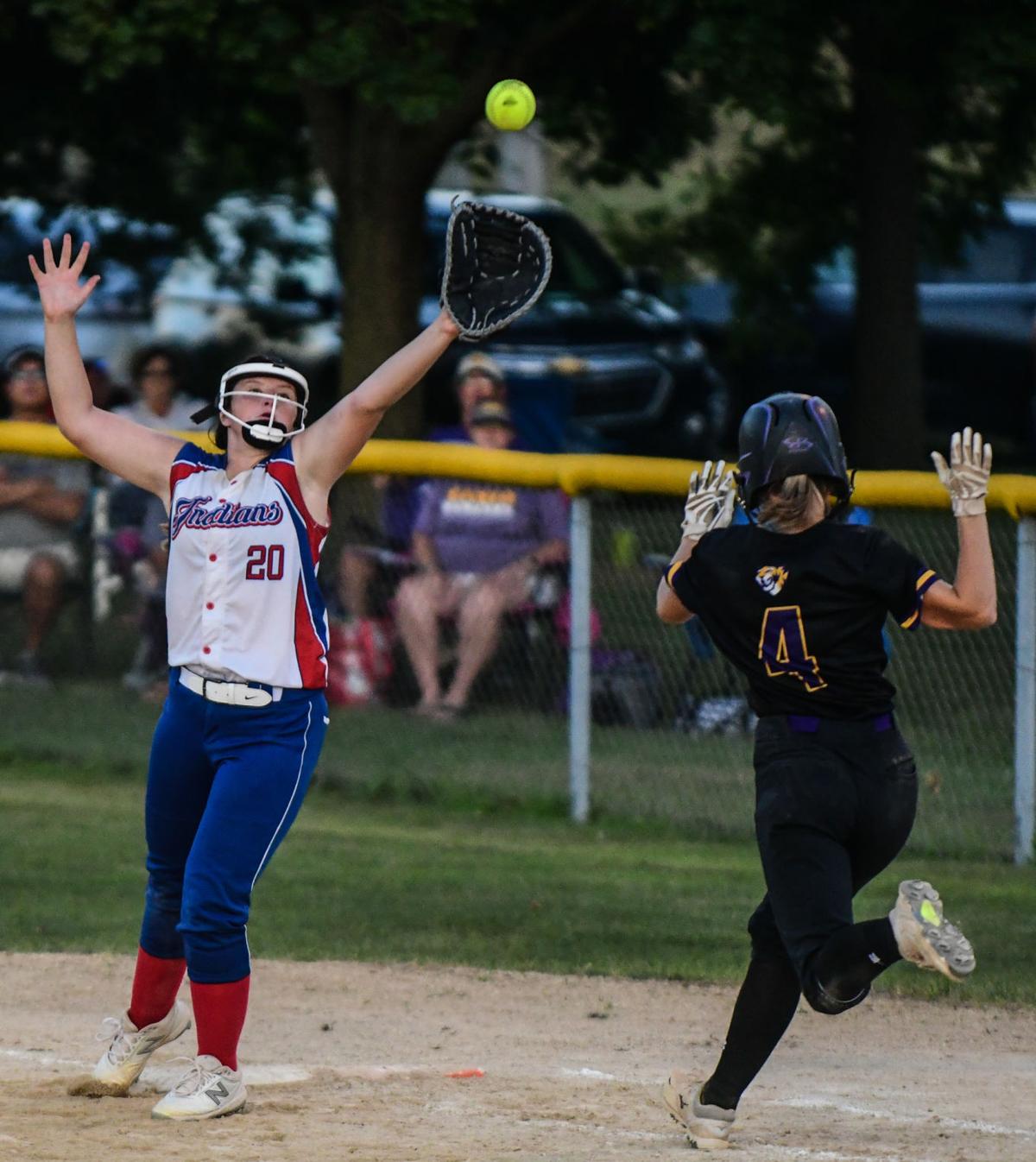 Kennady Bigwood reaches for a throw to her at first while Central DeWitt’s Alyssa Eden runs towards the base during the Sabers 6-5 win over Camanche on Monday. 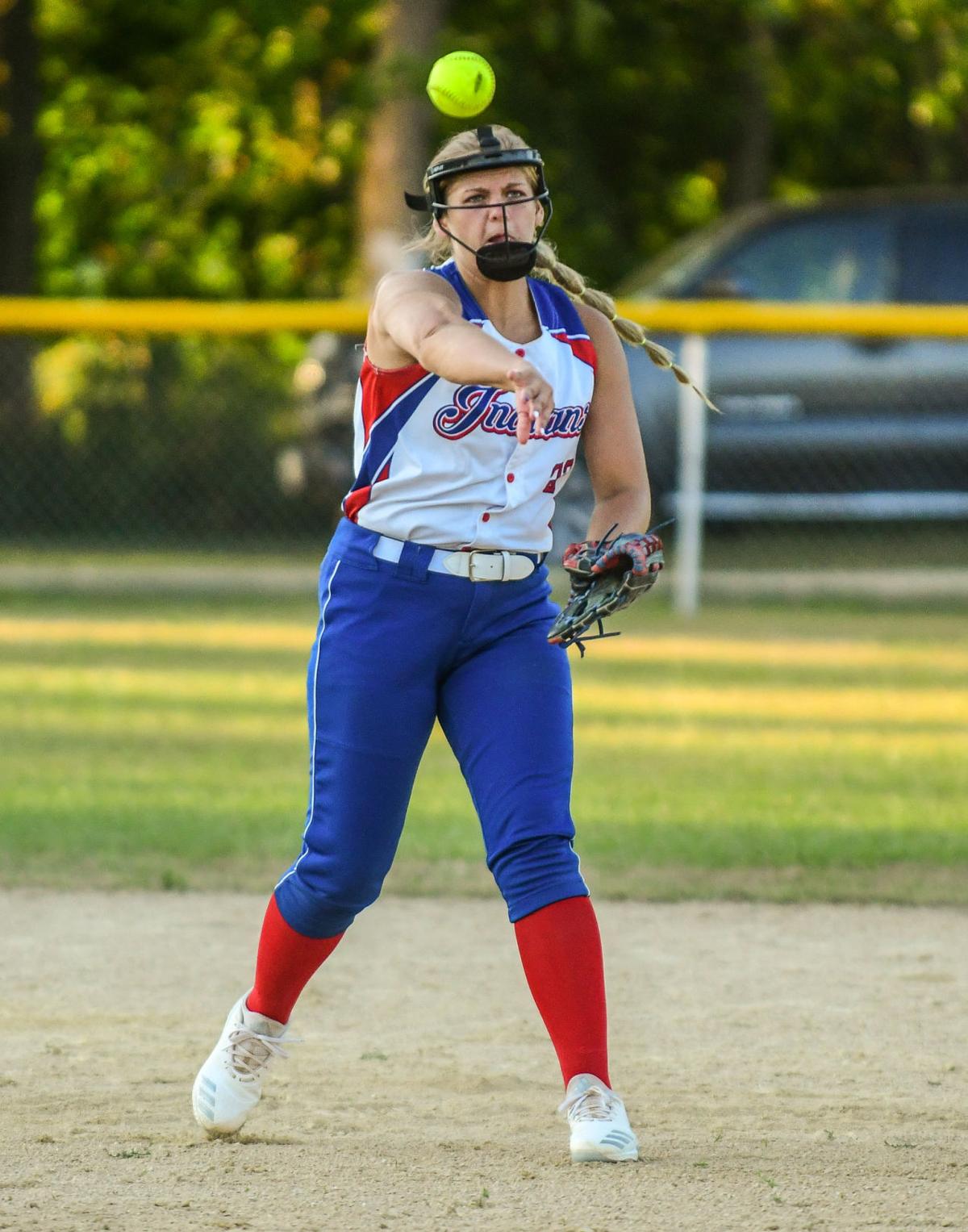 Camanche sophomore Lauren Snyder makes a throw from shortstop to first base during the Indians’ Monday night home game against Central DeWitt. 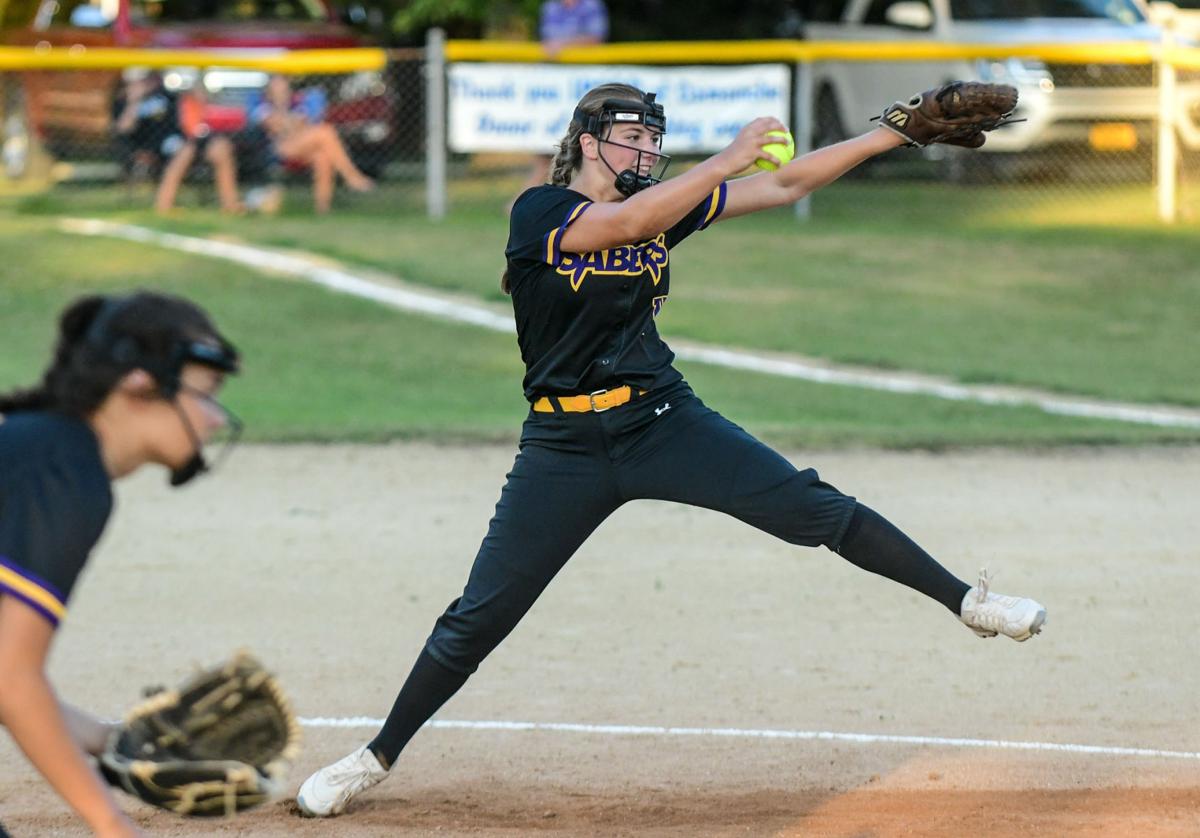 Paige Owens delivers a pitch for Central DeWitt during their win over Camanche earlier this season.

Central DeWitt’s Lily Fulsang attempts to score on a slide into home while Camanche catcher Aubrey Carstensen tags her out during the non-conference softball game in Camanche on Monday. Central DeWitt took the win 6-5.

Kennady Bigwood reaches for a throw to her at first while Central DeWitt’s Alyssa Eden runs towards the base during the Sabers 6-5 win over Camanche on Monday.

Camanche sophomore Lauren Snyder makes a throw from shortstop to first base during the Indians’ Monday night home game against Central DeWitt.

Paige Owens delivers a pitch for Central DeWitt during their win over Camanche earlier this season.

CAMANCHE – Emotions ran freely from the Camanche softball team after the final out on Monday night. The Indians gave up a late lead and fell 6-5 to Central DeWitt, but it was a little heavier than that.

It was the final home game for Camanche and the last of the regular season. They open up regional play Wednesday night on the road. That means for senior Tarah Wehde it was her last game at home. Wehde holds a number of records within the Camanche softball program, including all-time home run leader.

But the Indians also had to say goodbye to sophomore Lauren Snyder, who will be moving with her family at the end of the season and starting school in a new state. With the impending loss of two of their top performers, the entire team felt the weight of the moment.

“Those two girls, I wish them nothing but the best,” Camanche head coach Andrew Carbajal said. “They’re awesome for our program and I hope our youth are looking up to both of them, because they’re worth a lot.”

The Indians came out fast on Monday, though. Wehde came up to the plate and started the game off with a solo homer, bringing her career total to 49.

Snyder followed that homer up with a double, and then Jamie Robertson drew a walk to put two on.

The second homer of the inning came off the bat of Abby Beal. Beal crushed the ball and no one questioned if it would go the distance as it sailed over the center field fence. The Indians had a 4-0 lead over the Class 4A Sabers.

“I think we came out hot because we knew it [was emotional],” Carbajal said. “Then their pitcher kind of settled in, warmed up – and she’s a great pitcher.”

However, the Sabers knew they needed a win as the regular season nears an end for them. The Sabers had a packed week last week, playing three doubleheaders against top ten teams from three different classes.

“It’s a much needed win after last week,” Central DeWitt head coach Lee Swanson said. “I knew it was going to be a long week and it was like we had a little bit of a hangover coming in and we needed that win.”

Talbot Kinney started things off with a solo homer of her own, cutting the lead to 4-1 in the second.

In the top of the third, Isabelle Pierce laid down a bunt to reach first to lead off the inning. Ava Morris then shot a double into the outfield grass.

Two straight walks came after that, then a double off the bat of Kinney gave her two more RBI and evened the game up 4-4.

“We need to figure things out with our pitchers,” Coach Lee Swanson said. “We can’t get out of the first inning and that’s hurt us. I’m happy with the second inning on. She did a nice job keeping the ball down late. “

It stayed knotted at 4s until the home half of the fifth. Jamie Robertson started the inning with a single. Robertson crossed home after eighth grader Kennady Bigwood looped a ball into short center field, the go-ahead run scoring.

“She’s not surprised she’s just happy because we’ve been working on that all year,” Carbajal said about Bigwood. “That same spot. She’s my clutch girl, her bat’s there.”

The Sabers clawed their way back in their last at-bat. Two consecutive hits, including a double from Ava Morris, scored the first run. Then a bunt attempt was bobbled and overthrown to first by the Indians, allowing another run to cross.

Central DeWitt loaded the bases, but the Indians were able to get out of that jam and give themselves a chance. A short infield hit was handled by Wehde in the pitcher’s circle and she tossed it to catcher Aubrey Carstensen at home for the force out. Carstensen flipped the ball back out to second base and Snyder got a tag for a double play.

“That was an exciting play,” Carbajal said. “Just how savvy we were ... to have that instinct in tremendous. It’s awesome that Aubrey [Carstensen] knew to get that to second.”

Ella Blinkinsop and Snyder both hit singles in the top of the second, and then a Saber error loaded the bases. With two out, Carbajal sent Snyder from third in an attempt to reach home but the Sabers managed to catch her in between bases to end the game.

“That last play wasn’t what decided this,” Carbajal said. “That was my decision, I wanted to make sure we gave 100 percent and I thought we could get it. But their pitcher [Paige Owens] is fast.”

Central DeWitt plays a doubleheader next against Davenport West. They welcome Maquoketa to their home field to open up the postseason on Thursday night.

The Indians head to West Liberty on Wednesday to open up their postseason.

“We’re not the same team as that first time,” Carbajal said. “West Liberty better be ready, and be scared, because we’re going to get ready tomorrow.”