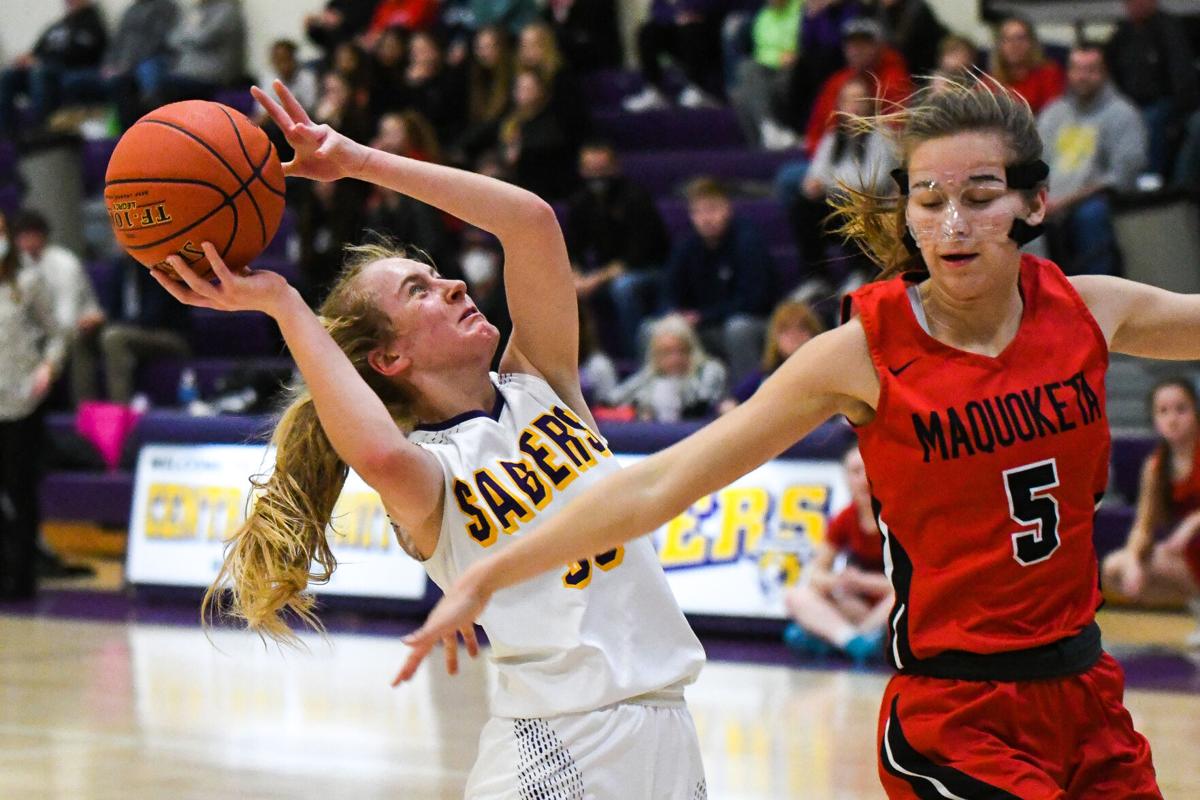 Central DeWitt’s Lauren Walker tried to get a shot up on a fast break on Thursday, Jan. 13 against Maquoketa. 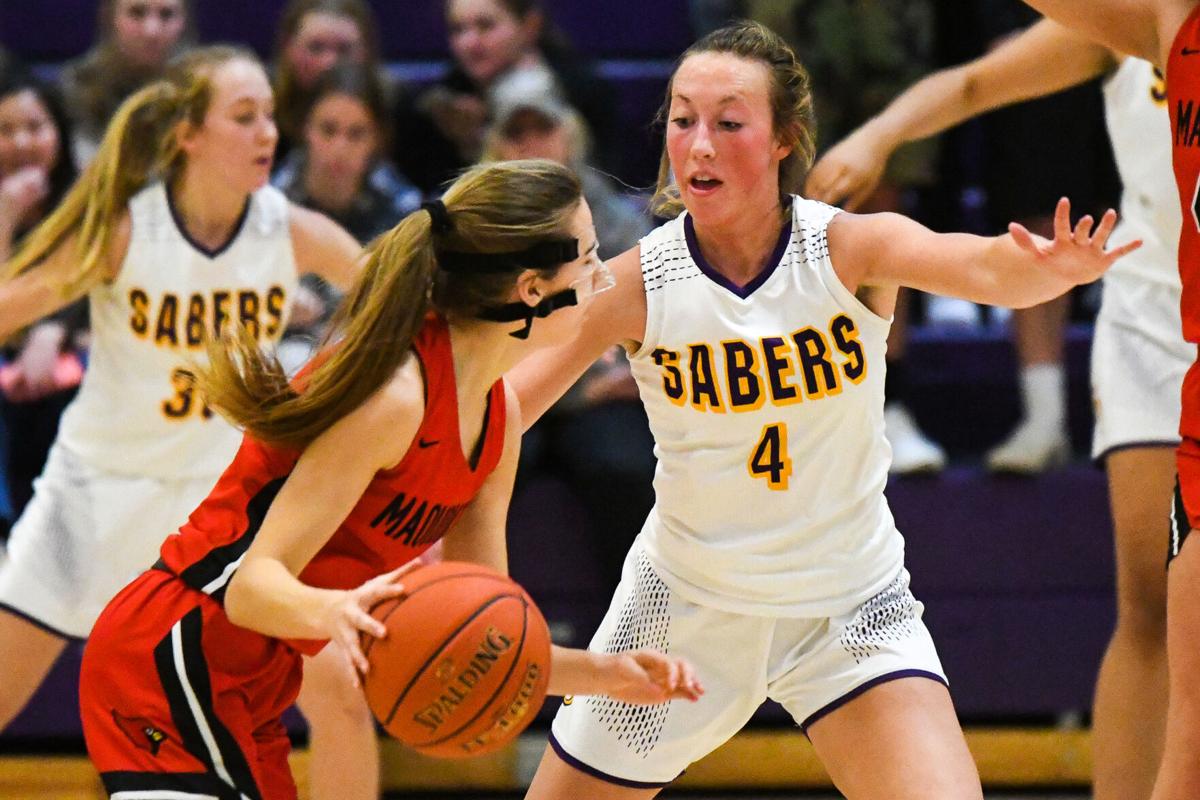 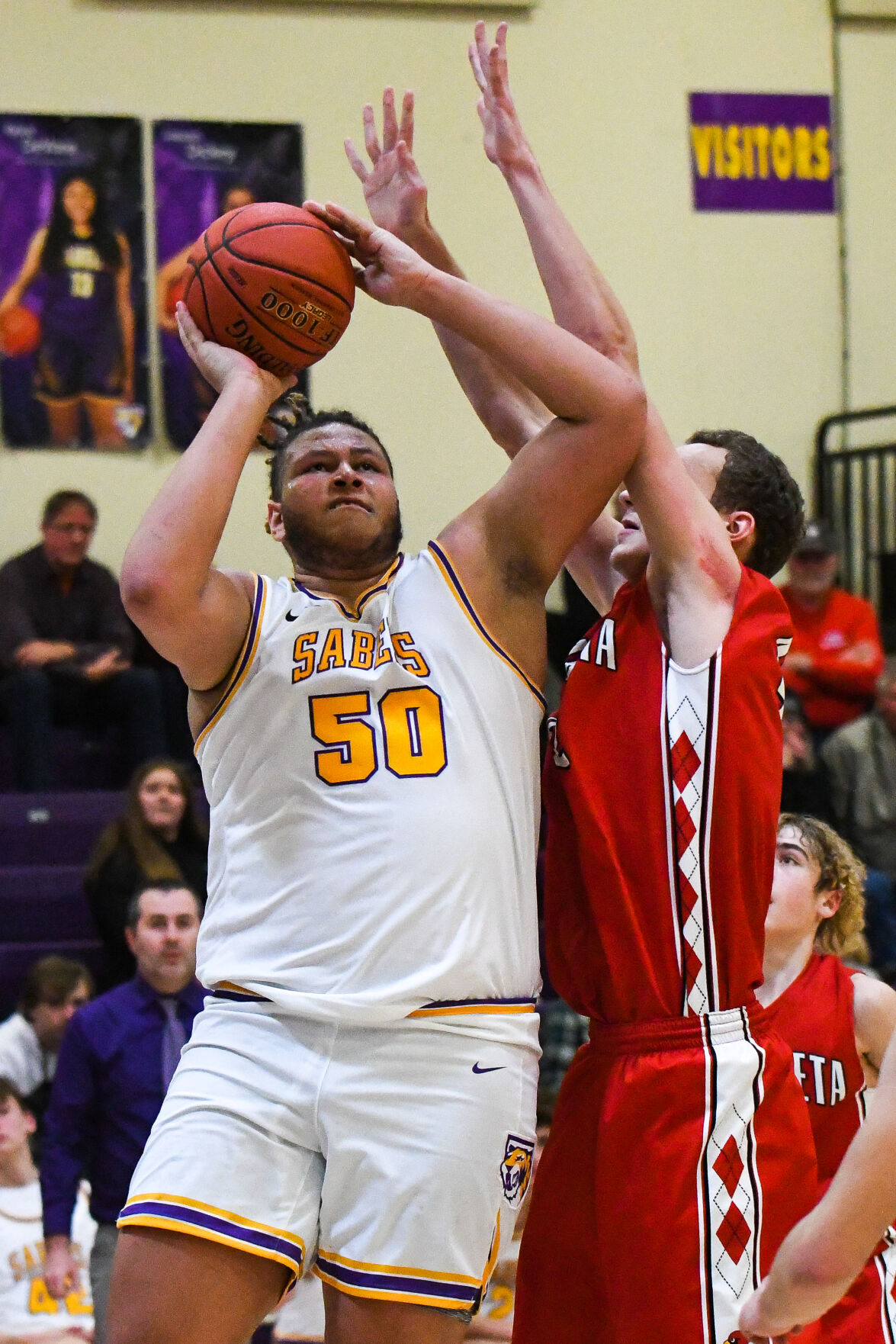 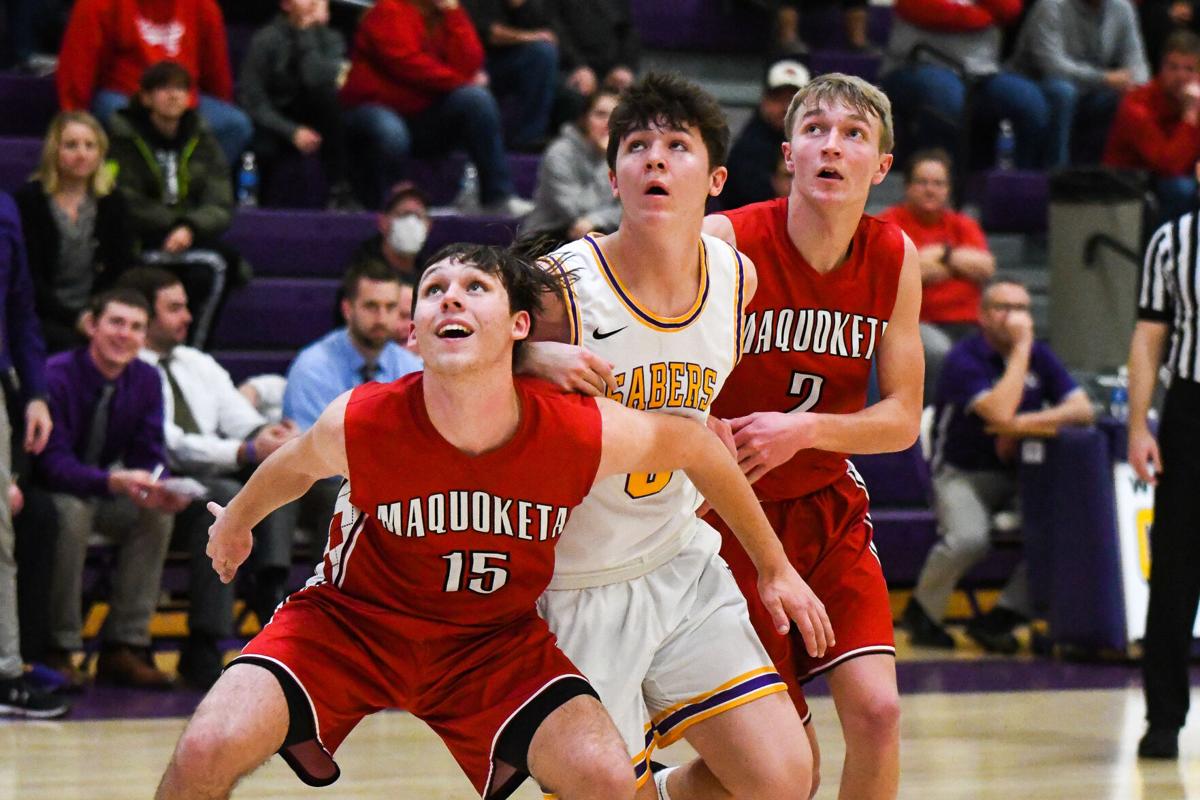 Central DeWitt’s Paul Kuehn boxes out on a free throw attempt against Maquoketa on Thursday, Jan. 13.

Central DeWitt’s Lauren Walker tried to get a shot up on a fast break on Thursday, Jan. 13 against Maquoketa.

Central DeWitt’s Paul Kuehn boxes out on a free throw attempt against Maquoketa on Thursday, Jan. 13.

DEWITT – The No. 10 ranked Central DeWitt girls basketball team kicked off a string of difficult conference games by cruising to a dominant non-conference nonconference win over Maquoketa Thursday night, downing the Cardinals 73-41 on their home court.

The Sabers jumped out to a lead early and held onto it the entire contest. By the end of the first eight minutes of play they had a 19-10 lead, with freshman Lauren Walker holding eight of those points.

They extended that to double-digits in no time. Out of the gates in the second quarter, Taylor Veach took the ball to the rim and put it in while getting fouled, completing the three-point play. The next way down the court, Lauren Walker stoe the ball near halfcourt and took it in and got fouled, putting both in to give them the 24-10 advantage.

The Sabers held the Cardinals off of the board for four full minutes in the second quarter. As soon as Maquoketa hit a three of their own, another three-point play by Veach put the Sabers right back up 31-13.

Even after halftime, they didn’t stop. The Cardinals cut the lead to 13 with a three-pointer to start the third, but then an easy pass to Walker scored and then Veach hit a three of her own. Veach led the Sabers in scoring with 18 on the night.

Allie Meadows followed those up with three consecutive baskets. Meadows added another 14 and Lauren Walker had 12. EmmaGrace Hartman had ten points, bringing the total of athletes in double-digits Thursday night to four.

In the next three weeks the Sabers face the three teams they’ve lost to this season. Friday night, they take on Class 5A No. 8 Pleasant Valley. On Tuesday, Feb. 1 they’ll take on Davenport Assumption, who held a Class 3A ranking up until this week. Just four days after that, they face Class 4A No. 8 North Scott.

They also see Bettendorf, a formerly ranked Class 5A team, in that time.

“We just want to be playing our best basketball,” head coach Justin Shiltz said late last week. Shiltz was out sick for Thursday’s contest at home. “We’re going to see everybody for a second time, everybody’s going to scout, and we just have to play good basketball on both ends of the floor, especially the offensive end. We need to be firing on all cylinders.”

The Sabers improve to 10-3 and will stay at home Friday night For their Mississippi Athletic Conference battled with Pleasant Valley (10-2).

DEWITT – When the Central DeWitt boys team last saw Maquoketa in mid-December, they came away with a two-point victory on the road. They knew the rematch wasn’t going to be any easier.

But the Sabers made it look that way with a huge second half boost, taking a 68-48 win from Maquoketa at home Tuesday night.

A back-and-forth first half made it seem like the game might take the same path as the one in December. The Sabers managed a 16-11 lead after one quarter, but that was quickly erased in the second.

Second quarter, Shawn Gilbert came alive for the Sabers. The Cardinals hit a three to start the second quarter and cut the lead to just two, but Gilbert came down and hit a shot from the block for his first points of the night.

He went on to score on the next two possessions, one of them a three-point play. He led the Sabers in scoring on the night with 25 points, all of his points coming in the final three quarters.

Maquoketa stayed right with them the entire first half. Tied 23-23, Shaun Gilbert hit a huge three from the corner for DeWitt. And then he scored again. Gilbert ended with 12 points in the second quarter alone.

The Cardinals had answers, scoring five straight and tied the game at 30, taking the lead on the next possession. The Sabers managed to take a one-point lead into the half thanks to a buzzer three from Michael Schneider. Schneider ended the night with 10 points.

Shawn Gilbert kicked off the third quarter with much of the same. He scored, then went to the other end and blocked a Maquoketa shot attempt.

“He’s been huge,” Marshall said about Gilbert. “He gets up and down the floor very well ... he’s an outside player who goes in and posts up. Great hands, great footwork, he’s a coach’s dream.”

A few plays later, three-pointers from Gus Pickup and Michael Schneider gave the Sabers a 10-point lead they never relinquished.

HARBOUR BEACH [mdash]On Sunday, January 9, 2022, Daniel Gerlach, husband and father of two, passed away at the age of 65 from cancer. Dan was born on July 28, 1956 in Preston, Iowa to Gene and Eleanor Gerlach. On December 19, 1989, he married Marie Hill. Dan was preceded in death by his fath…

Rebecca Sue Wilkens, 44, of Thomson, Illinois, died Wednesday, January 19, 2022 at Mercy One, Clinton. Online condolences may be expressed by visiting snellzornig.com. The Clinton Chapel Snell-Zornig is assisting the family with arrangements.