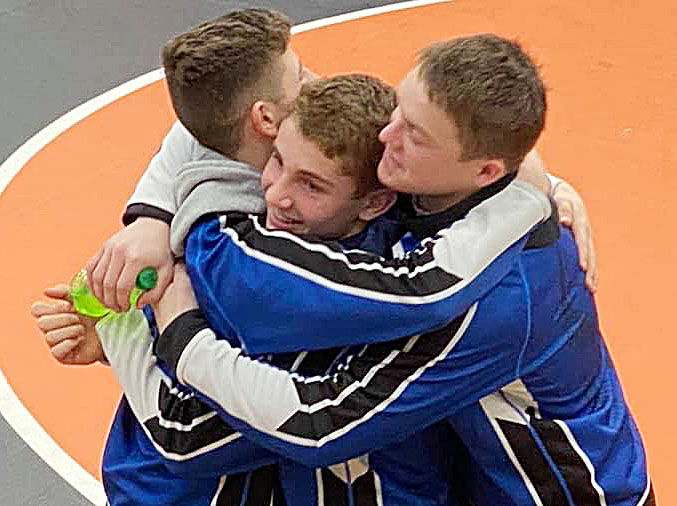 Camanceh’s Ben Vogel, Eric Kinkaid and Cade Everson embrace after the district meet in Washington this weekend, where the three qualified for the Iowa High School State Wrestling Tournament. 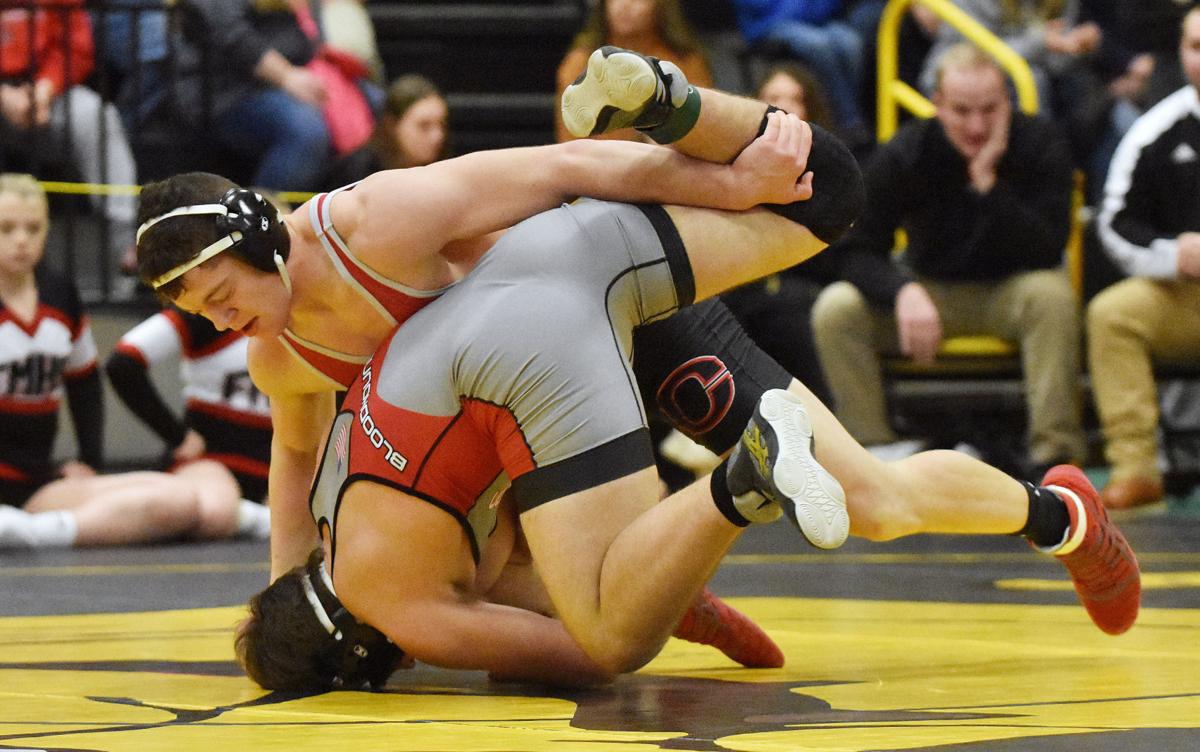 Clinton’s Trevor Bitner wrestles in the semifinals on Saturday at Bettendorf High School, going on to be the district runner-up and punching his state berth.

Camanceh’s Ben Vogel, Eric Kinkaid and Cade Everson embrace after the district meet in Washington this weekend, where the three qualified for the Iowa High School State Wrestling Tournament.

Clinton’s Trevor Bitner wrestles in the semifinals on Saturday at Bettendorf High School, going on to be the district runner-up and punching his state berth.

CLINTON – Eight Iowa wrestlers and one Illinois are getting ready for their respective state wrestling tournaments after qualifying for state this weekend.

Camanche has the most wrestlers heading out to Des Moines, sending three athletes. Eric Kinkaid, who is ranked No. 1 in the state, is heading out for the second consecutive year.

Kinkaid placed fourth at the state tournament last year. It took him just 1:09 to pin Davis County’s Marcus Elam to send the sophomore to the championship round, where he won by an 8-1 decision over Assumption’s Noah Gonzalez for the 132-title.

Ben Vogel is heading to Des Moines for the first time. Vogel won the district title at 120 with a pin in the semifinals, then a 2-0 battle over Davenport Assumption’s Ethan Forker.

Cade Everson is also making his first state appearance. Everson, a junior, took home two decisions on the day. The first was an 8-4 decision over Washington’s Ayden Frazer and the second a 16-12 over Solon’s Caleb Ebert.

The Clinton River Kings are sending two. Hunter Randall punched his ticket with a district title at 220.

Randall will be heading to Wells Fargo for the second time in his prep career. Randall picked up a 45 second pin in the semifinals and then went on to win by 4-0 decision over Diego Lozano of Fort Madison.

Trevor Bitner will be joining Randall after a runner up performance at 182. Bitner took home three wins on the day. He picked up a win by fall in the second period to kick off the quarterfinals, then won by 12-8 decision over Cedar Rapids Prairie’s Clayton Scott.

Bitner fell ni the championship match by a 5-2 decision, but took home a qualifying spot nonetheless.

Northeast senior Ty Schmidt pushed through for the Rebels. Schmidt was the lone district qualifier for the Rebels, and finished as the runner-up at 170 in the Class 1A District 8 tournament. Schmift won over Cameron Keith of Wilton in a 9-2 decision in the semifinals and then fell to Lisbon’s Max Kohl 9-4 to finish second overall.

Central DeWitt will also be sending two athletes. Keaton Zeimet, who placed third last year, will be making his third straight state appearance at the end of the week.

Zeimet wasted no time on his way to his third straight state appearance. The top-ranked 113-pounder won by a tech fall in the semifinals then pinned West Liberty’s Alex Beaver in just 58 seconds to earn his spot.

Cole Miller also made it through for the Sabers, winning the 285 title. Miller won by a 6-1 decision to start the day and then pinned Washington’s Brayden Hartman halfway through the third period to earn his title and his state trip.

On the Illinois side, Fulton’s Nate Portz was the sole qualifier for the Steamers. Portz (24-9) is making his first state appearance as a junior. Portz edged out two opponents by decision: A 7-4 decision over Rockford’s Steven Lee and a 3-2 decision over St. Bede’s Peter Sampson.

That took him to the 285 championship round, where Portz was pinned about a minute in. This will be Portz’s first trip to state, and the only qualifier for the Steamers.