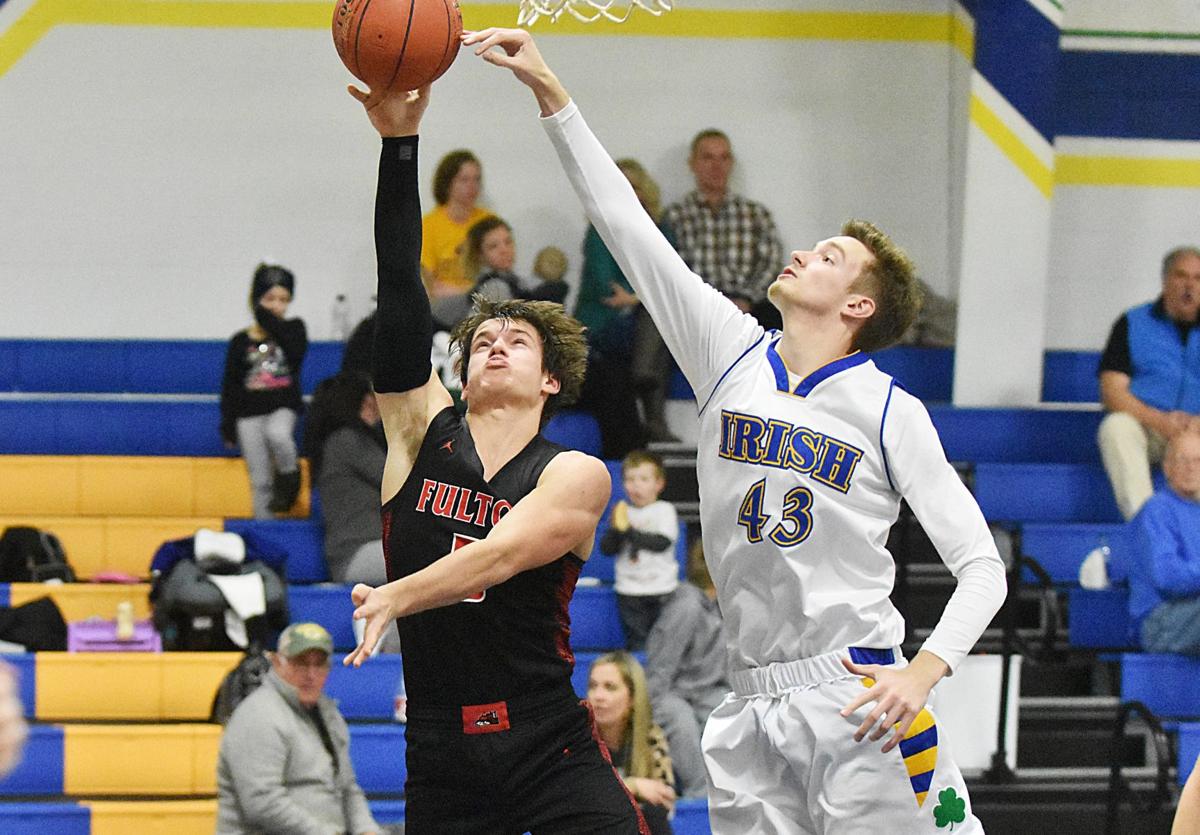 Fulton’s Will Conner shoots a layup while Prince of Peace’s Nathan Moeller defends during Fulton’s win over the Irish on Monday night. 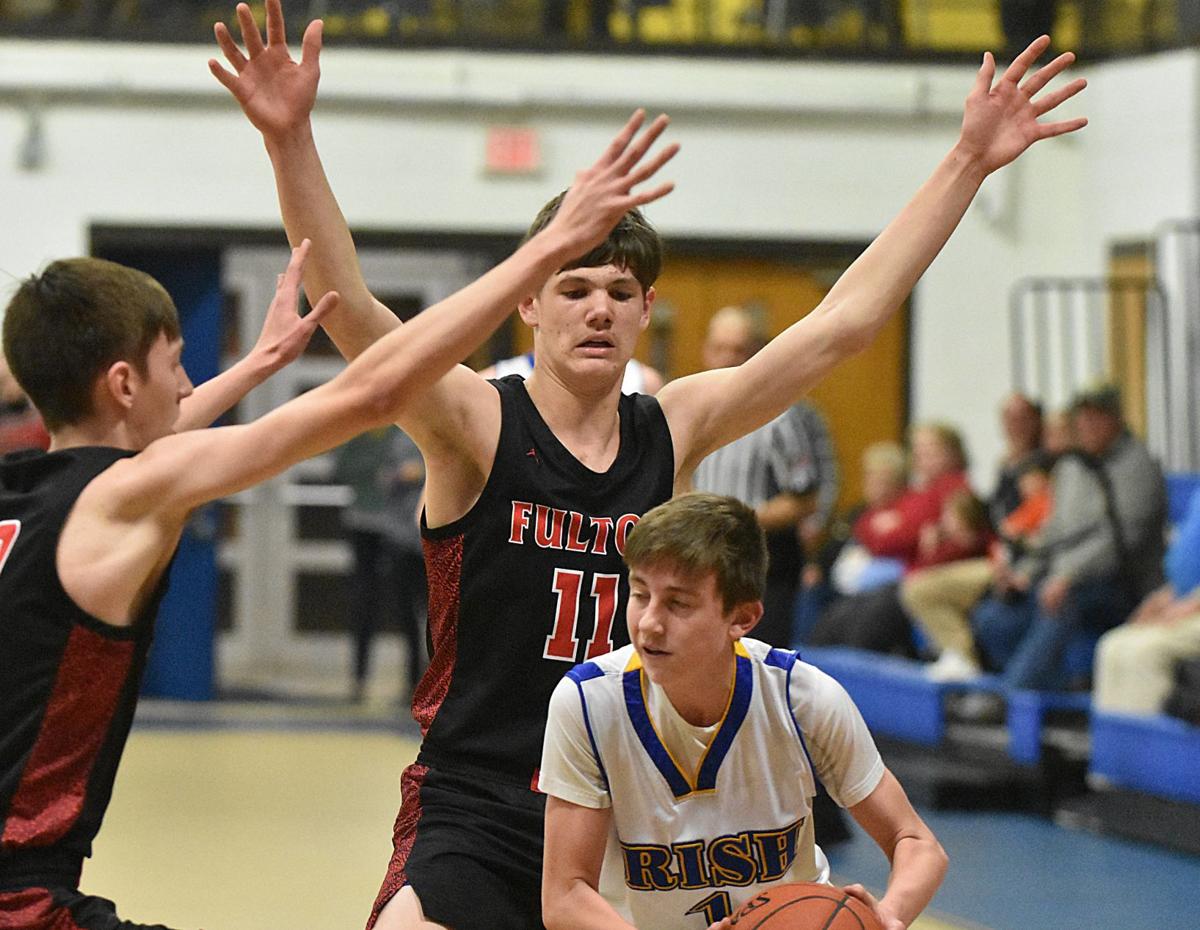 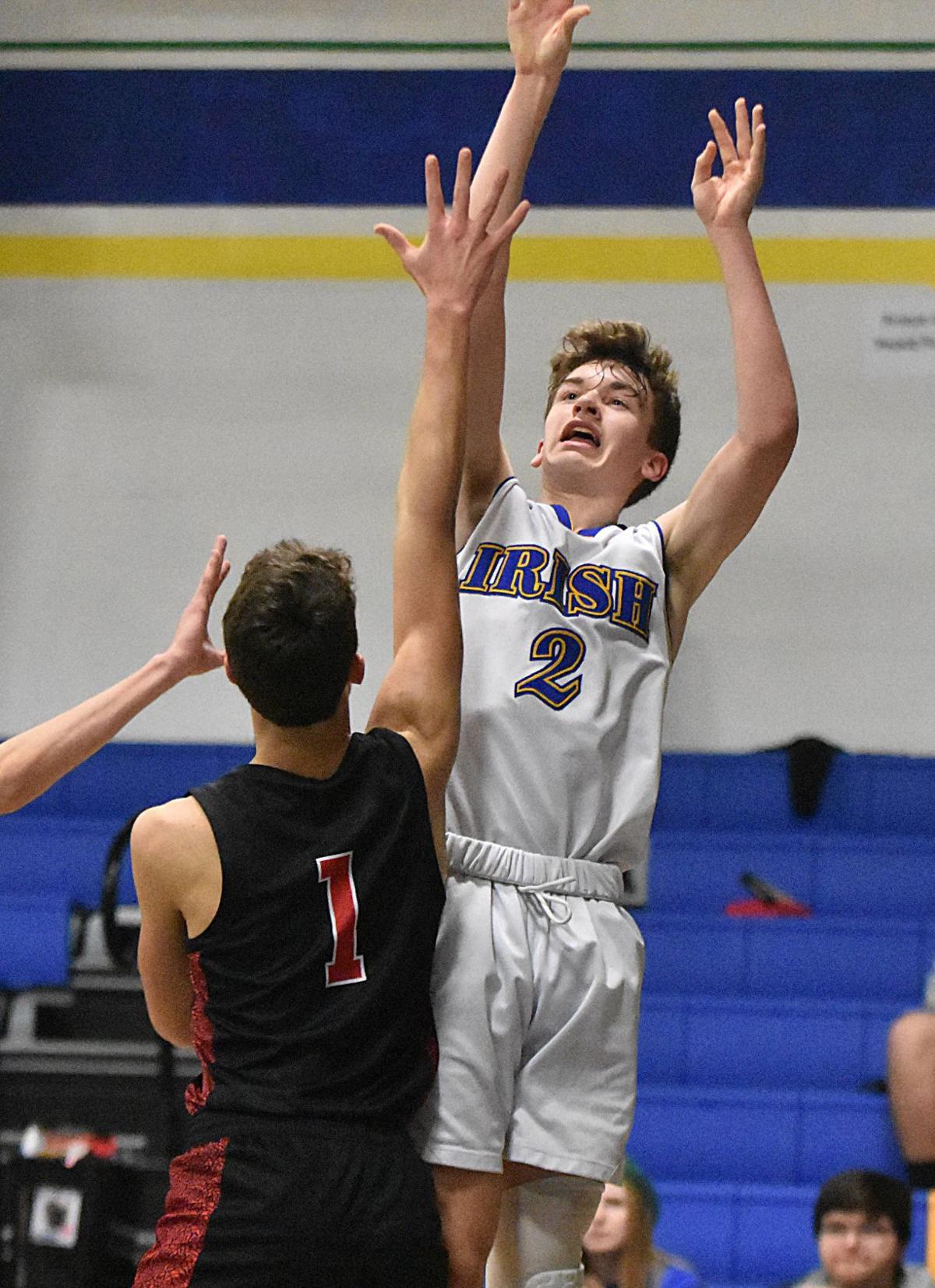 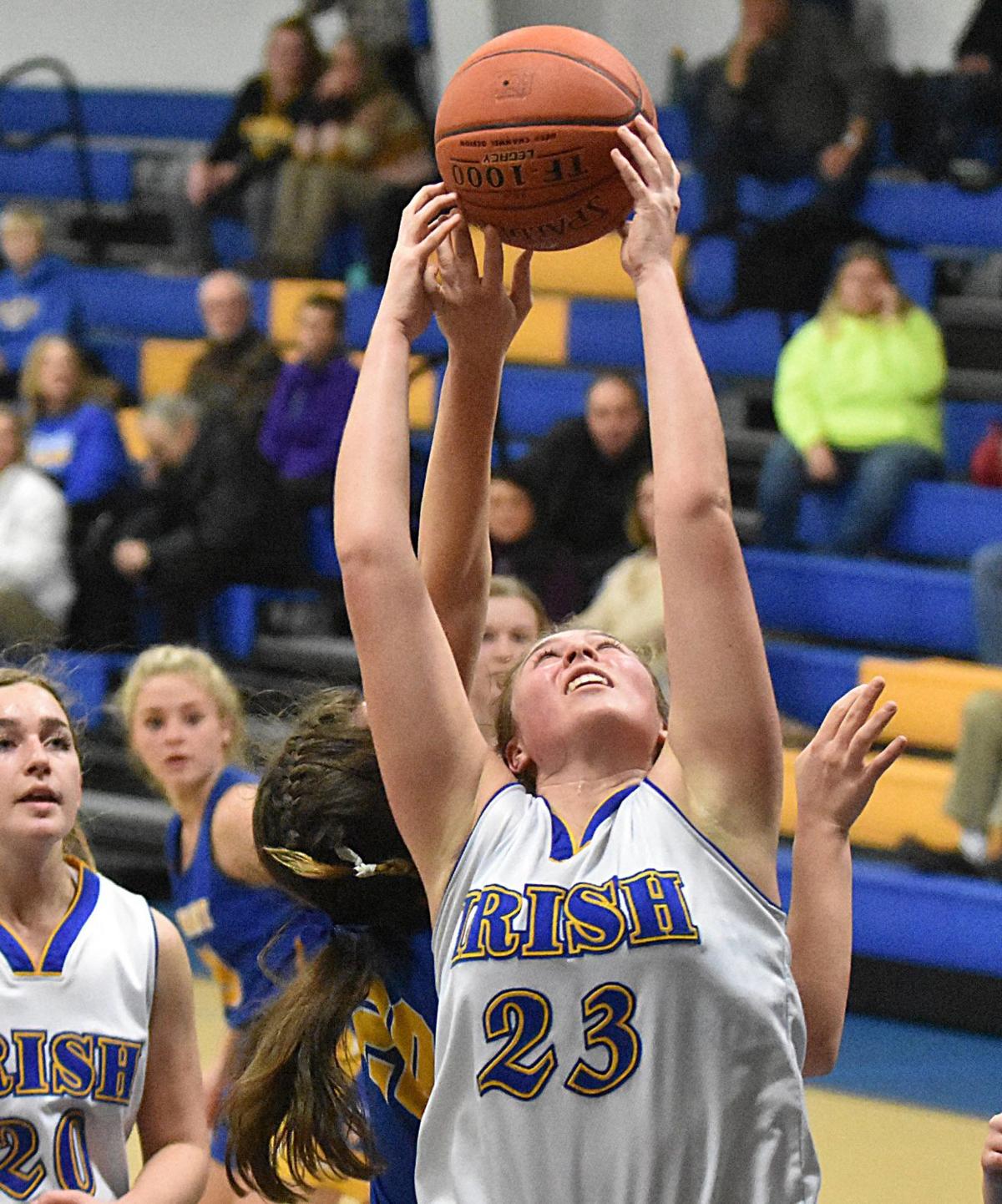 Prince of Peace’s Lilly Isenhour reaches and fights for a rebound during the Irish’ loss to Wahlert Catholic on Monday. 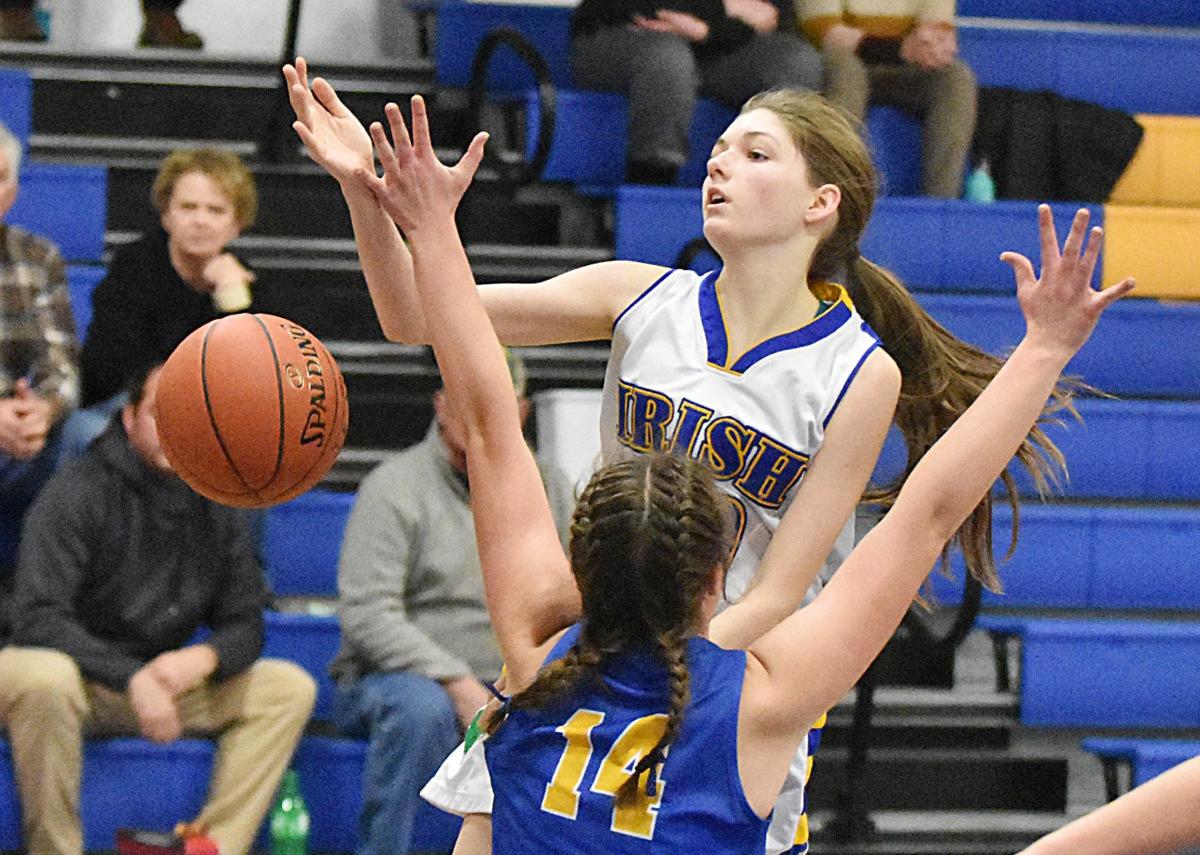 Fulton’s Will Conner shoots a layup while Prince of Peace’s Nathan Moeller defends during Fulton’s win over the Irish on Monday night.

Prince of Peace’s Lilly Isenhour reaches and fights for a rebound during the Irish’ loss to Wahlert Catholic on Monday.

CLINTON – The Prince of Peace boys played a good half of basketball at the Joe O’Donnell Sports Center on Monday night.

But like the rest of their season, their depth became their biggest obstacle.

After playing with Fulton through the first half of a non-conference contest, the Irish were plagued by fatigue and saw the Steamers run away with the lead.

“I was kind of afraid to throw a new guy in,” head coach Gerry Murphy said. “But I told him tonight, tomorrow [Tuesday against Midland] you’re going to have to play. We just need the minutes from some other guys.”

Fulton came away with a 32-28 lead at the halftime break, but ran away from there. Our of the gates, they went on a 5-0 run, including a fastbreak and a three pointer by Bradlee Damhoff to go up 37-28.

In fact, the Irish struggled to score for the first half of that third quarter. Their first bucket came from Nathan Moeller at 3:25 with an easy hook in the lane.

“We’re still trying to work more on our execution, getting guys to score and being more aggressive,” Murphy said. “We can’t give up seven points because then we’re battling the rest of the game.”

Connor Barnett responded with a three, giving the Steamers the first double-digit lead of the night.

To start the fourth, Kyler Pessman hit a long shot for the Steamers and then Kyler Wallace did the same for the Irish. Right after, Wallace notched a steal on the perimeter and converted on the other end.

Another defensive stop by the Irish and Moeller scored once again, cutting the lead to seven points.

That’s as close as the Irish would get, though. The Steamers had plenty of legs and used them, capitalizing on fast breaks while the Irish struggled to find the rim.

“They did a great job on the fast break and we talked about that,” Murphy said. “That was the big difference.”

As the Irish defense slowed, Barnett found more shots from the outside. Meanwhile guards like Kyler Pessman and Brock Mason were having no problems on the dribble attack, and Bradlee Damhoff found offensive putbacks.

“We have to have better offensive possessions and not take quick shots,” Murphy said. “So we’re controlling the tempo, not the other team.”

The Steamers improve to 13-5 and play Rockridge next, who is also undefeated in the Three Rivers Athletic Conference.

Meanwhile, Prince of Peace’s personnel issue doesn’t improve. They have a short turn around, playing Tri-River Conference opponent Midland at the Joe on Tuesday night.

The Prince of Peace girls were a step slow all night.

They allowed double-digit offensive rebound and committed over 30 turnovers in a sloppy 63-36 loss to Wahlert Catholic on Monday night in a non-conference game at home.

The Irish were slow from the get go. Their press break had no momentum against the Golden Eagles full court pressure, and the rebounding was almost non-existent. Head coach David Nelson called a timeout halfway through the first, already trailing 11-2.

“Tonight, our head just wasn’t in it the whole time,” Prince of Peace assistant coach Sabrina Lippens said. “I don’t know if they’re getting tired ... and I don’t want to make excuses for them because there [aren’t] any excuses, but our heads just weren’t in it.”

On defense, the Irish started with a box and one to try to shut down leading scorers. That didn’t seem to work with other Eagles hitting outside shots with the sagging zone.

But man didn’t seem to work either. The Golden Eagles blew right by the Irish, dribble attacks and back doors easily blowing by Prince of Peace.

None of the Prince of Peace athletes ever took off on offense, turning the ball over more times than they got attempts up.

The rebounding situation helped the Golden Eagles take a large lead into the halftime break. They often had two or three different shots on a possession, the Irish just never getting their hands on it, despite having a slight height advantage.

“I hope that’s it and it doesn’t happen again,” Lippens said. “We continue on working to get that inside position and moving them back so they’re not shoving us under the basket. Tonight it was an obvious problem.”

The Irish fall to 5-5 on the season and return to conference play on Tuesday, taking on Midland at home.