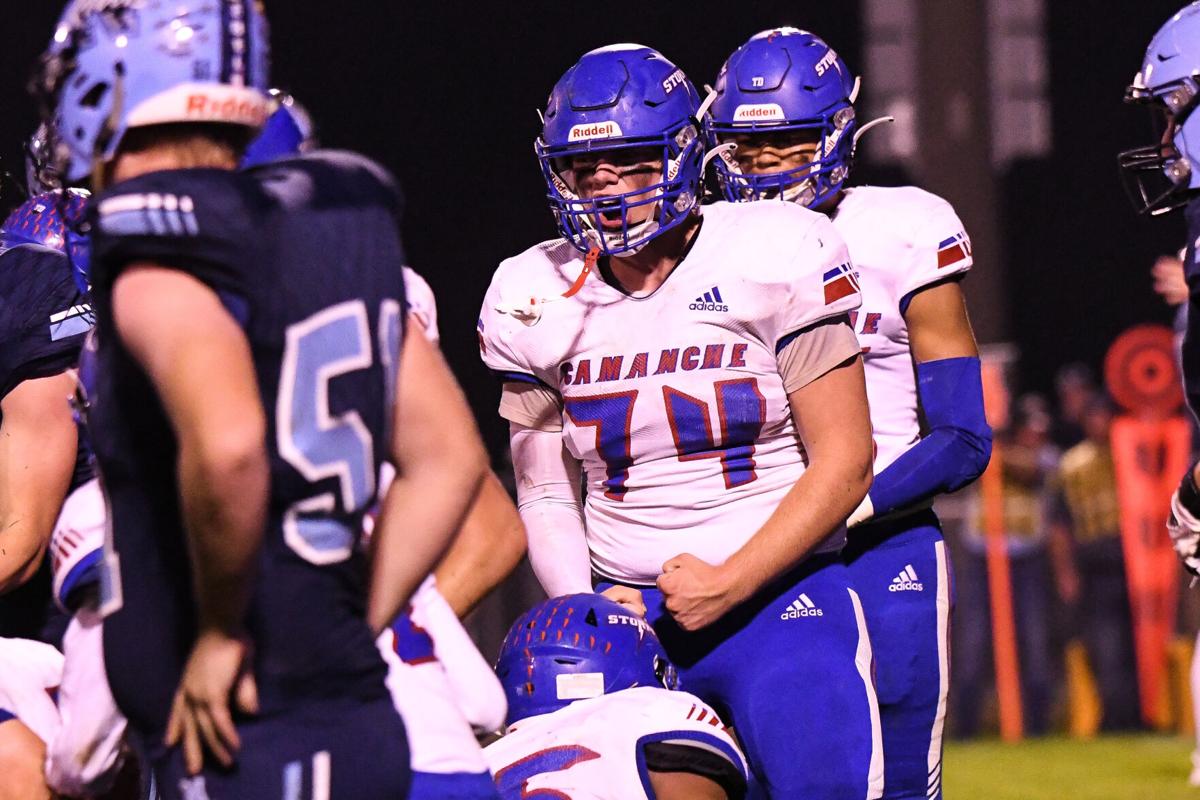 Camanche senior Jayson Johnson reacts after the Storm made a defensive stop during their win against Northeast on Friday night. 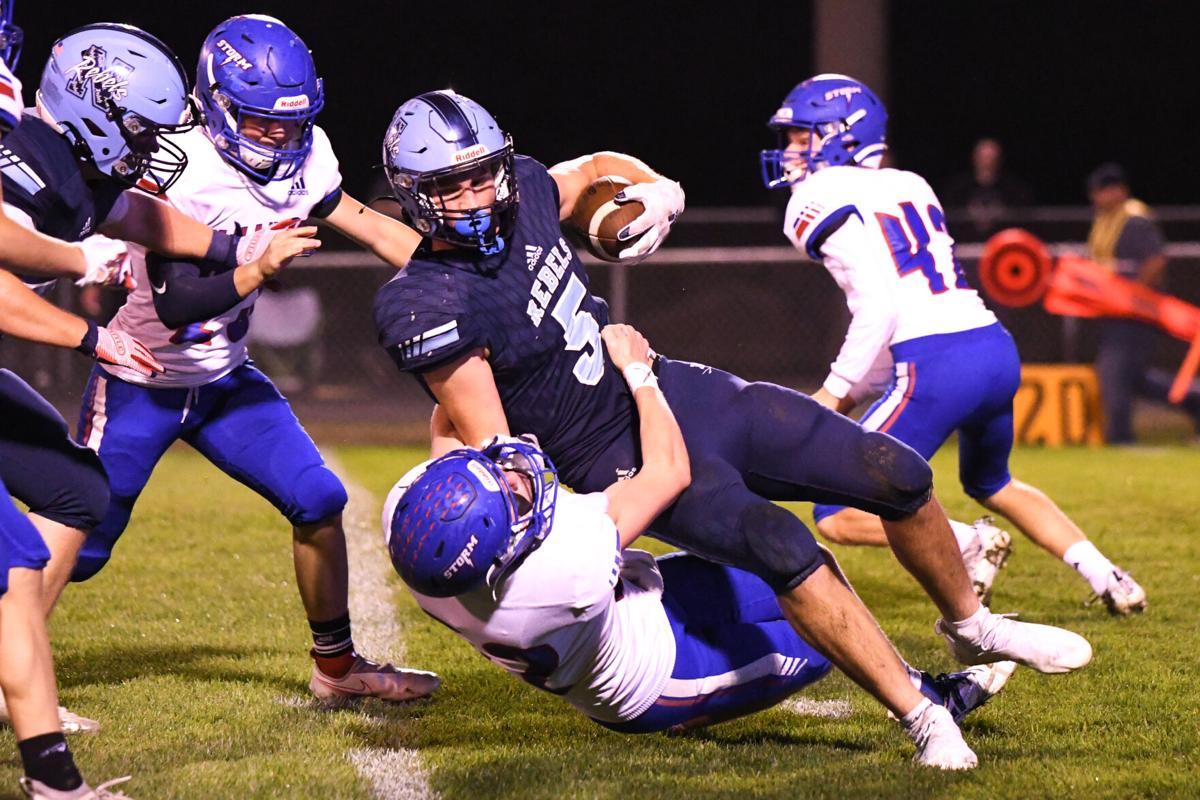 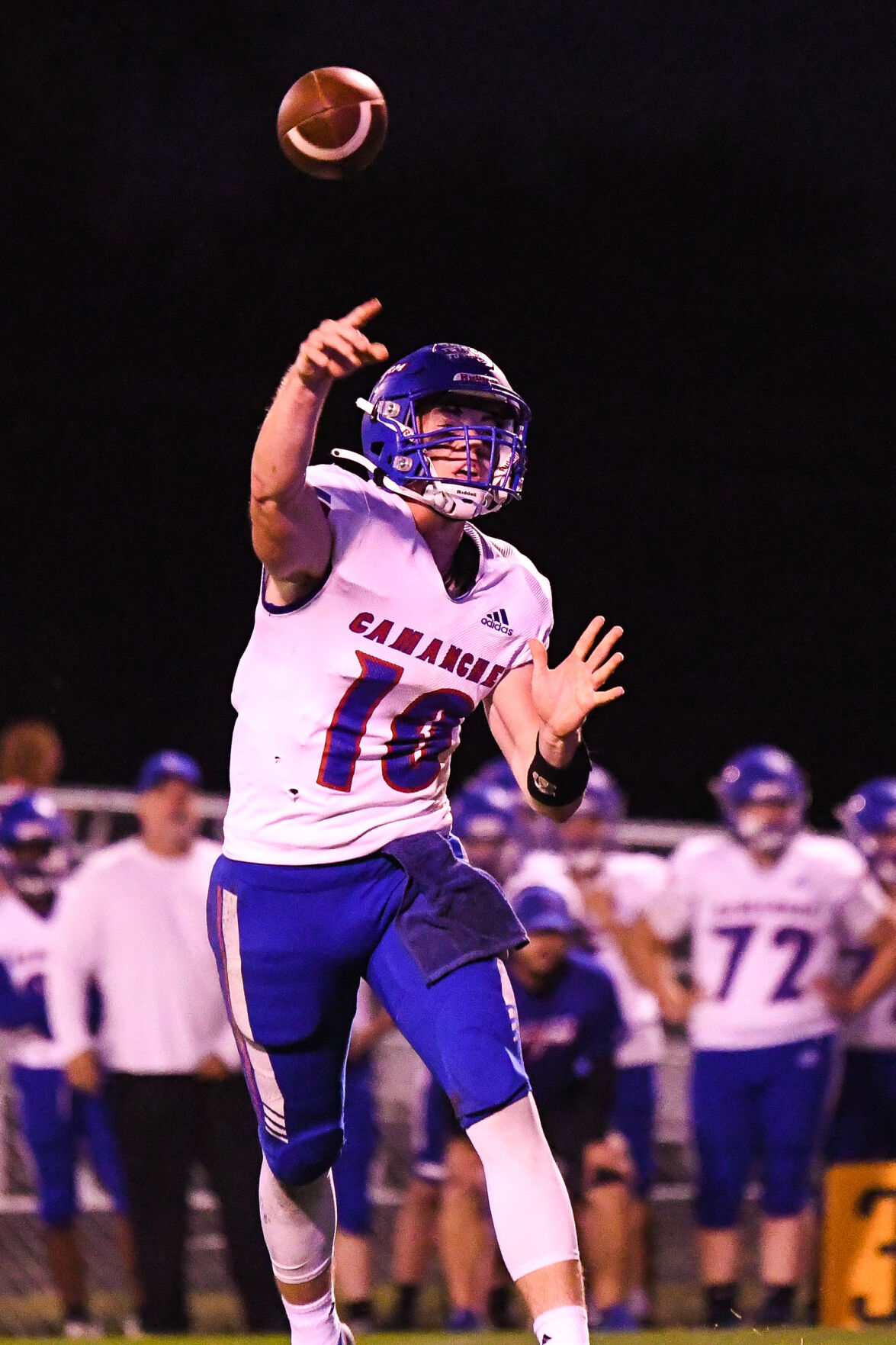 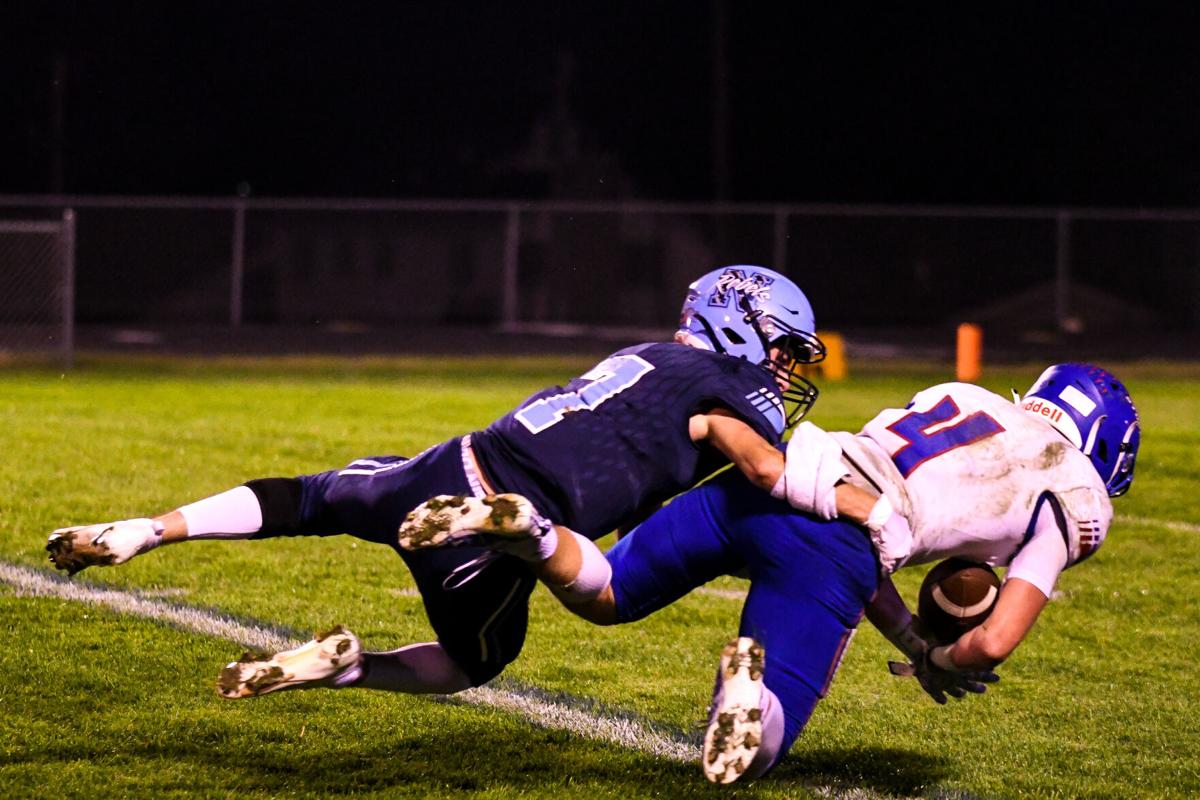 Camanche senior Jayson Johnson reacts after the Storm made a defensive stop during their win against Northeast on Friday night.

GOOSE LAKE – With the final buzzer, the Camanche football team took the Battle of the Blue trophy over to their home crowd.

The trophy – named for the local rivalry between Northeast and Camanche – has only been in the hands of the Storm since it was initiated in 2018.

The Storm knocked off Northeast 28-14 in Goose Lake Friday night, winning the rivalry trophy for the third year and handing the Rebels their first district loss of the season.

Northeast was coming into the contest on a four game winning streak and no losses in the Class 2A District 5 bracket.

“It’s truly amazing,” Camanche senior Eric Kinkaid said. “This will probably be my favorite game this season. We played great – we wanted to show them we are just as strong this year as we were last year.”

Camanche came out hot, scoring on their first two possessions of the first quarter. A few big rungs from Ethan Schultz and Eric Kinkaid kept the ball moving down field, plus an 11 yard pass play from Michael Delzell to Tucker Dickherber put the Stomr on the five yard line.

Eric Kinkaid took the ball up the middle from there, his first of three touchdowns on the night.

Five minutes after the first points, Ethan Schultz found a hole in the middle for the second score of the game, giving the Storm a 14-0 lead.

“We weren’t doing our jobs up front,” Northeast senior Cade Hughes said. “We weren’t filling the gaps, we weren’t reading pulls all night. That happened up front, and a lot of missed tackles.”

Meanwhile, the Storm defense was working against a much bigger line on the Rebel side. They kept the rush attempts at bay, making some huge defensive stops to halt any moementum swings from the Northeast side. that included a huge fourth-and-one situation in the second quarter, where the line pushed the Rebel rush attempt back two more yards for the stop and the turnover on downs.

“We scout them, we know the formations, we change things up so we can defend them well,” Kinkaid said. “We’ve always been a small team, we know we can rise above.

“That stop, it turned the tide. We were already on top but it helped us keep going. The mood was amazing.”

Northeast did manage to cut the score before the halftime break. With three and a half minutes remaining in the first half, Rebel Ty Hudson picked off a Camanche pass attempt. Caleb Gruhn followed that up with a 12-yard run for an immediate first down.

Northeast quarterback Gavin Kramer sent a pass flying down field, and Gruhn pulled it down for a 27-yard gain. Another pass from Kramer to Pataska put the Rebels in position and Kramer ran it in one play after.

After forcing two turnovers in the first half and cutting the lead to just one score, it felt like Northeast controlled the game heading into the third quarter.

“Comign out of halftime, we knew we had to put a score up right away,” Hughes said. “We knew if we could tie the game we could win possession by possession and go from there.”

Camanche continued their work up the middle of the field in the third quarter and went on a nearly seven minute drive to score again and extend their lead. Kinkaid and Schultz both combined for nearly 350 yards rushing together.

“We’ve been focusing really hard this week on running,” Kinkaid said. “[Coach Dustin] Coit has put in some great new plays. This week, we wanted to focus on running and finding those gaps. Our linemen, they’re doing so much better, and our line is probably the biggest upgrade we’ve had this season.”

Kinkaid would end up running two more touchdowns in – one in the third quarter and one in the fourth – to extend the Storm lead.

Northeast had a slew of opportunities. They had four total turnovers in the game, including two in the second half. A couple big kickoff and punt returns had them set up with a short field, too, but they couldn’t find the openings.

“We didn’t capitalize,” Kramer said. “Our heads weren’t there. I know I wasn’t doing my job. I want missing a lot of receivers and I definitely could have played better.”

After their first touchdown in the second quarter, the Rebels weren’t able to score again until the fourth. With five minutes remaining in the contest, Kramer dove into the endzone from five yards out.

“They were sending a lot of backers all night,” Kramer said. “I have to get rid of the ball quicker.

“We have to drive the ball down the field, get rid of the ball fast, recognize where the blitz is coming from and our receivers have to get open. Then I have to be able to throw them the ball.”

Camanche (4-3, 3-1) hosts Tipton next week to round out the regular season at home. Northeast (4-3, 3-1) has a big test with Monticello coming to Goose Lake. The Panthers haven’t lost in District 5 play yet. A Rebel win would give Northeast a share of the district title.

“We’re not taking much, we have to flush this,” Northeast’s Hughes said. “We have to fix our mistakes and go from here. We have to come out firing on all cylinders next week.”