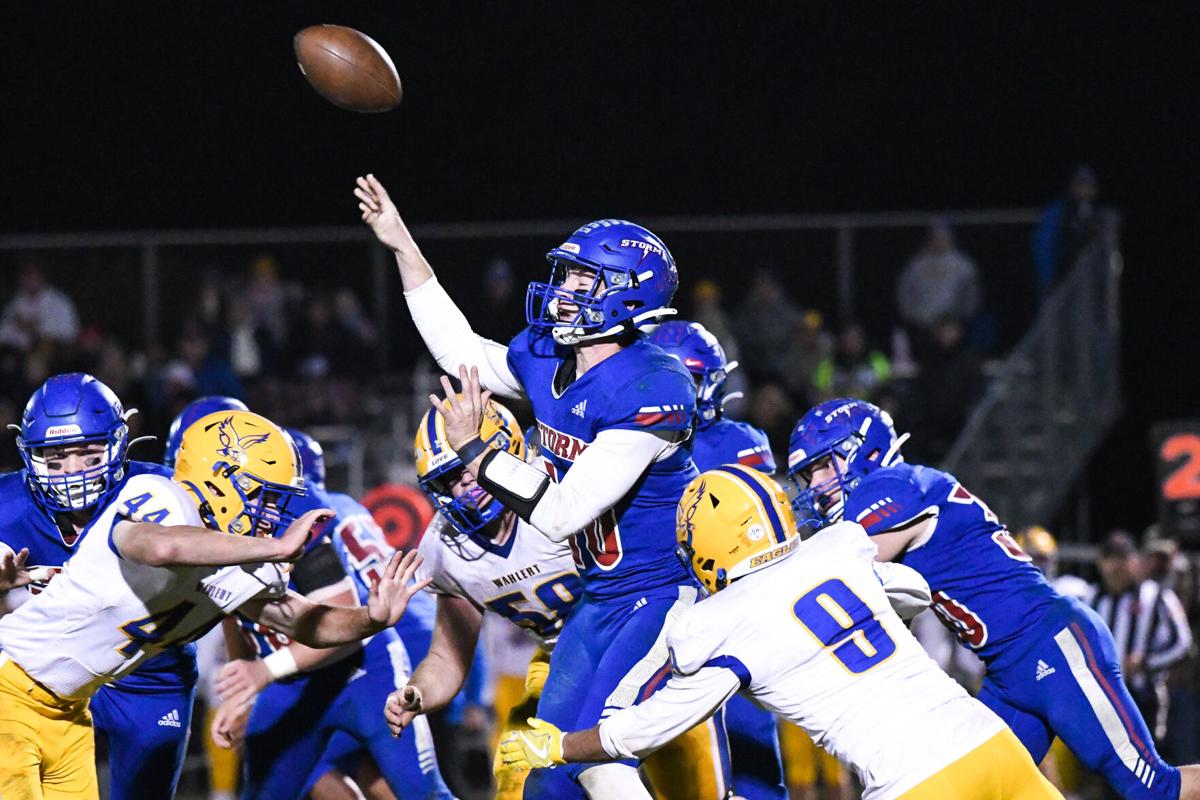 Camanche senior quarterback Michael Delzell throws a pass with pressure from Wahlert Catholic defense on Friday night. The Storm beat the Eagles 35-20 in the first round of the Class 2A playoffs to move on to the second round. 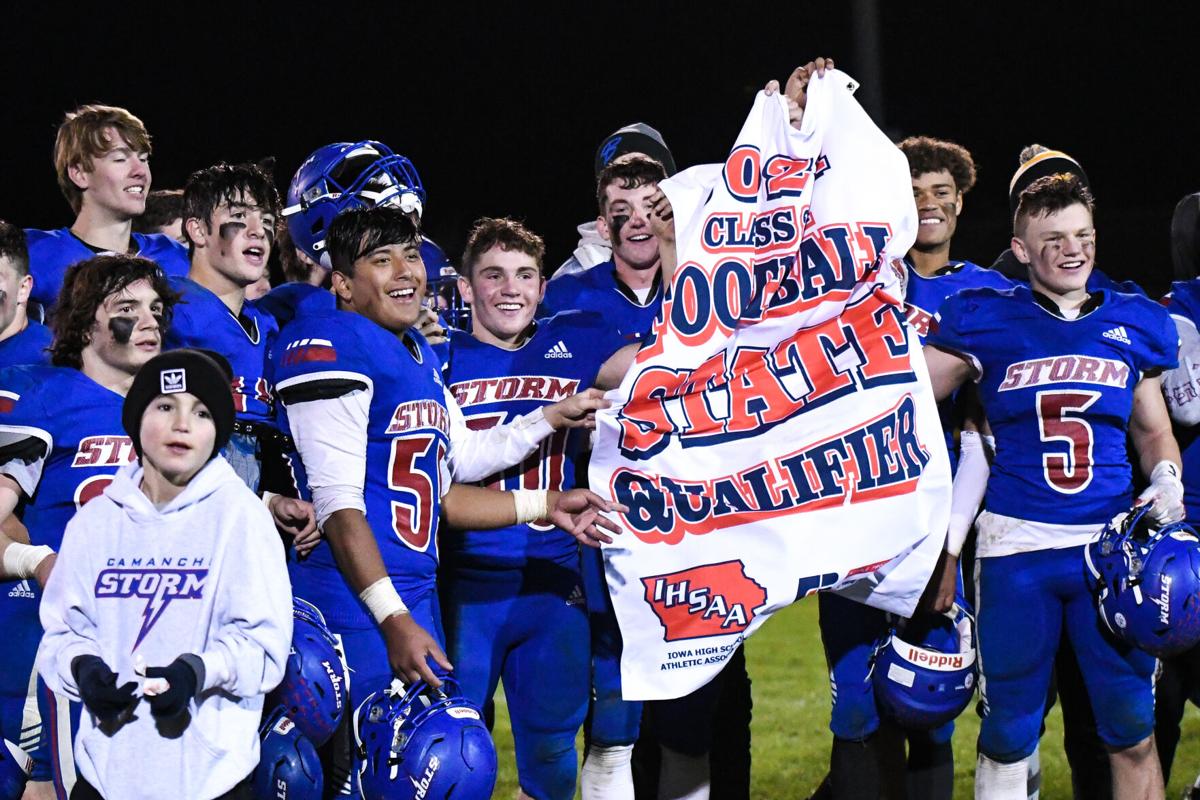 The Camanche football team breaks out their state banner after beating Wahlert Catholic 35-20 in the first round of the Class 2A playoffs Friday night. 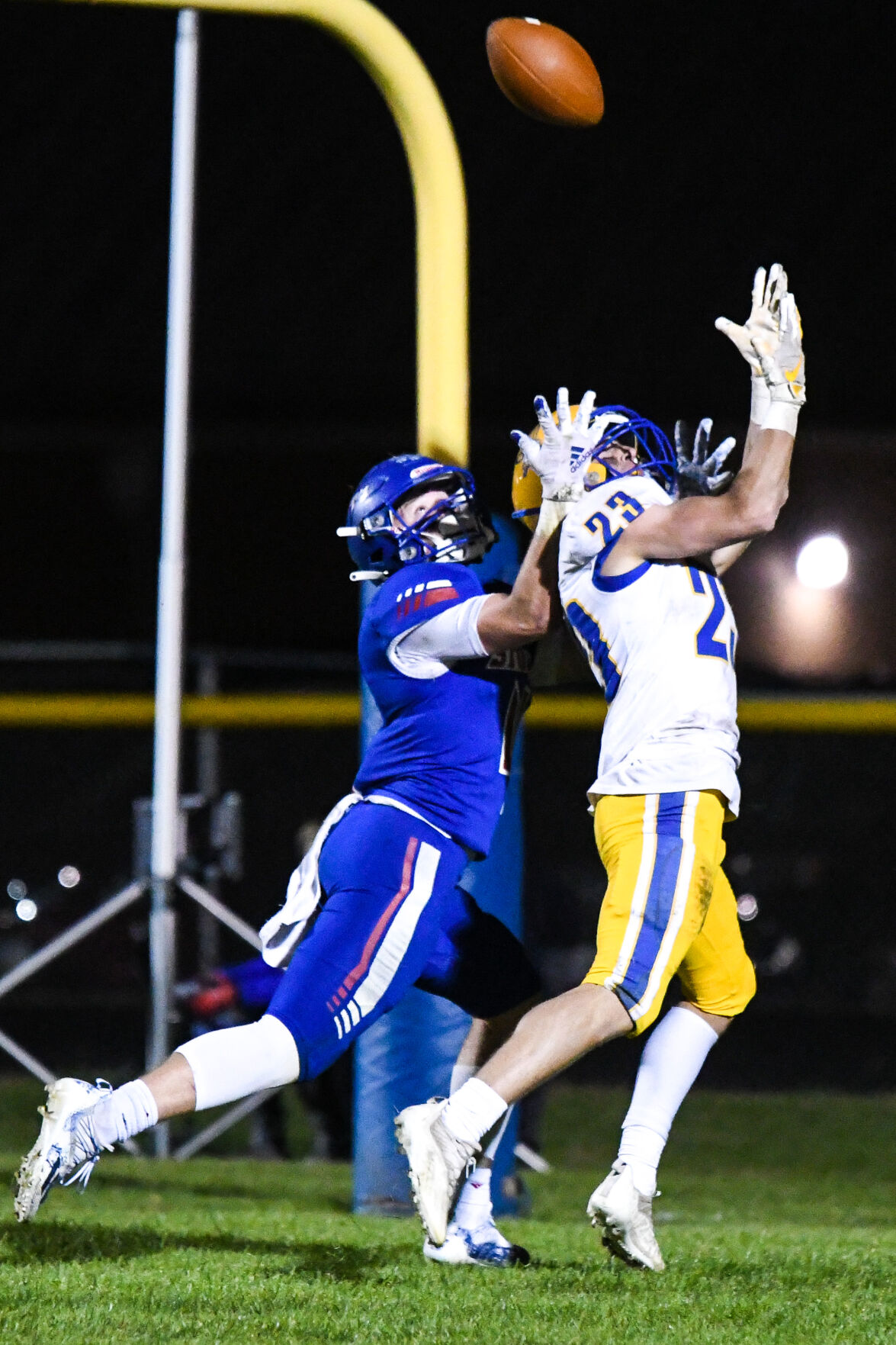 Camanche senior quarterback Michael Delzell throws a pass with pressure from Wahlert Catholic defense on Friday night. The Storm beat the Eagles 35-20 in the first round of the Class 2A playoffs to move on to the second round.

The Camanche football team breaks out their state banner after beating Wahlert Catholic 35-20 in the first round of the Class 2A playoffs Friday night.

“It felt so good,” Delzell said. “Especially being down right away … I knew we could do it the whole time if we stayed up, kept fighting and stuck to our football. I’m so proud of my guys, it feels so good.”

Camanche beat Wahlert Catholic at home Friday night 35-20 to advance to the Class 2A state quarterfinals next week.

With 3:29 left to play in the game, the Camanche defense put pressure once again on the Wahlert quarterback. He launched a pass towards the end zone, where Tucker Dickherber was waiting for an easy interception.

At that moment, the Storm looked at their 15 point lead and knew they had control of the first round.

“I think that was the nail on the coffin,” Dickherber said. “I think it took the air out of the ball a little bit and everybody relaxed.”

It was a slow start for Camanche, though. The Golden Eagles scored twice on the Storm and went up 13-0.

“They came out and punched us in the mouth,” Dickherber said. “There’s really no other way to put it. We turned to each other and said, we didn’t want this to be our last game. This wasn’t how we wanted to be remembered.”

By the middle of the second quarter, Camanche had put in their own two touchdowns and garnered the 14-13 lead. With the Eagles taking the ball back, the Storm picked up their defensive pressure. They forced the Eagles to a fourth down and 11, which led to a punt and Camanche ball.

“Our defense, they reminded me of last year’s defense,” senior Eric Kinkaid said. Camanche finished in the state semifinals in 2020. “Our energy was great no matter what. Everybody did their job, everyone pursued, the linemen hit their holes, everything was working on all cylinders.”

A 48-yard pass play from Delzell to Dickherber put the Storm at the 18. Immediately after, Delzell found Dunlap to make it first and goal.

“They play a lot of man, which we haven’t see a lot of this year,” Delzell said. “They do a good job, but my receivers stepped up tonight getting off those guys, getting open for me.”

They closed the drive out with a touchdown and a good kick to take the 21-13 lead.

The Golden Eagles marched down the field, but their final attempt at a score before the half was a pass play broken up by Dickherber in the endzone.

“I knew that if that would have been completed it would have changed the tides of the game,” Dickherber said. “I knew I had to stay in my zone, trust my defensive front to rattle the quarterback.”

Camanche extended their lead right out of the half. On a third down, Delzell barely got a pass off with defense hanging off of him and Adam Dunlap pulled it in for the first down.

“I try not to get too rattled,” Delzell said. “I try to trust my receivers. I knew Adam was going to go get it. He’s been doing that all year. I knew he was going to make the play for me.”

A huge run by Eric Kinkaid followed that up, and then Delzell found Dickherber again to put the Storm on the ten.

Kinkaid took the ball to the 1-yard-line and then Delzell punched it in.

“This could have been our last game and we just needed to make sure it wasn’t going to be,” Kinkaid said.

Wahlert struck again and was within reach of the game. After a big stop, Eric Kinkaid found an opening and broke away for a nearly 50-yard run. Two plays later, Kinkaid found the corner of the endzone to lift the Storm to 35 points.

“I had some great blocks for me,” Kinkaid said. “We had three guys out to where I was running and every single one of them needed to do their job to open things up and they did. That’s really what opened it up for me to get that.”

The Storm (6-3) will now wait to see who they play in the Class 2A state quarterfinal next week.