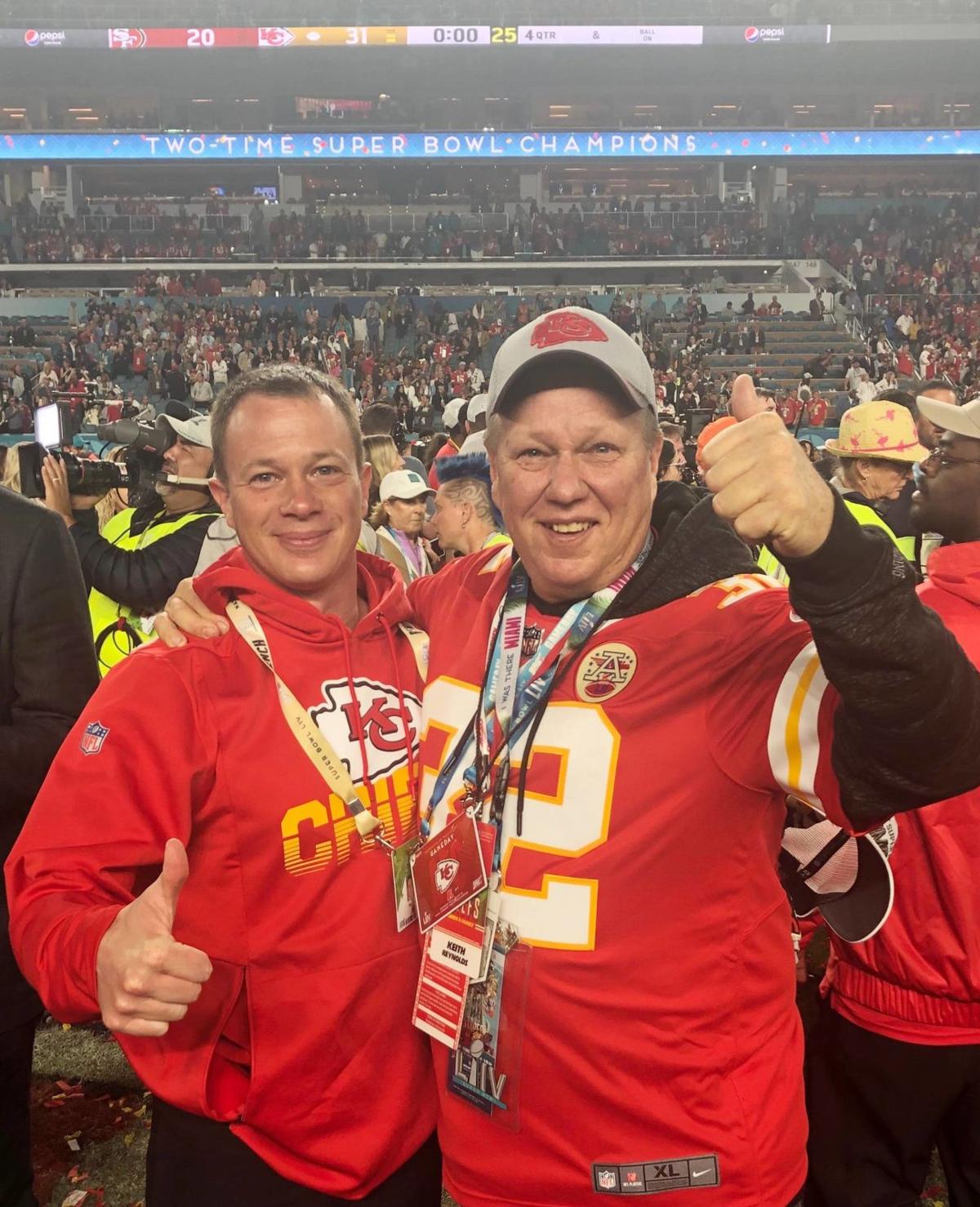 Kansas City Chiefs Strength and Conditioning Specialist Ryan Reynolds (left) poses with his father, Keith Reynolds (right) after the Chiefs beat the San Francisco 49ers in the Super Bowl in early February. Reynolds is a Fulton and University of Iowa graduate, while his father still lives in Albany, Ill. 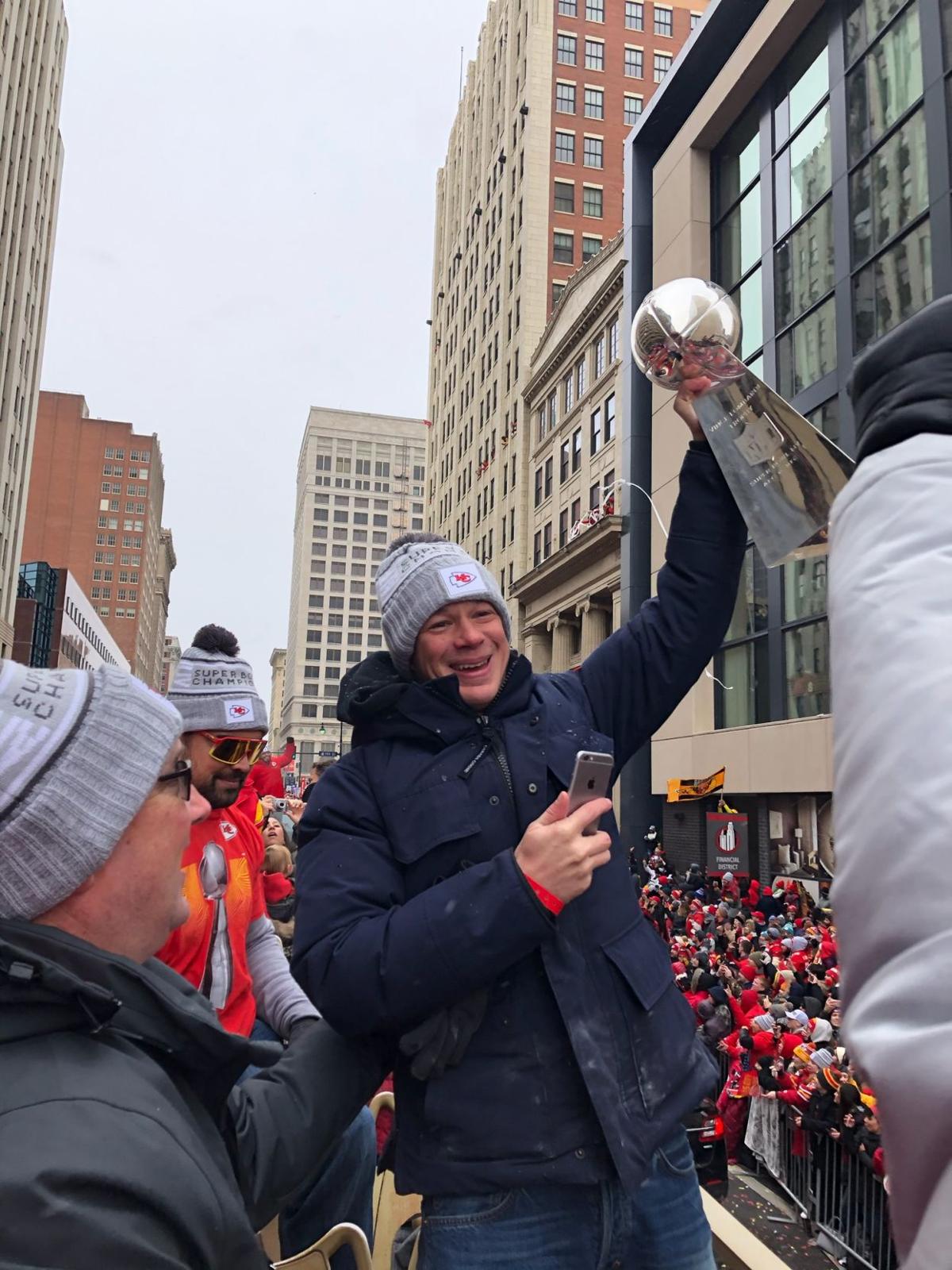 Kansas City Chiefs Strength and Conditioning Specialist Ryan Reynolds (left) poses with his father, Keith Reynolds (right) after the Chiefs beat the San Francisco 49ers in the Super Bowl in early February. Reynolds is a Fulton and University of Iowa graduate, while his father still lives in Albany, Ill.

Albany native Keith Reynolds tried to explain what it was like seeing his son on the sideline of the Super Bowl game between the Kansas City Chiefs and the San Francisco 49ers.

He wanted to describe how he felt when he witnessed his child lift the Vince Lombardi trophy over his head among all of Kansas City.

“For him to be in this position, its beyond any of our expectations,” Keith Reynolds said.

Keith Reynolds’ son, Ryan, is a Strength and Conditioning Specialist for the Kansas City Chiefs. Ryan graduated from Fulton High School, moving on to the University of Iowa before getting into college football coaching.

Keith can still remember when Ryan called him just a few short years ago to tell him about his biggest job offer.

“It was pretty cool,” Ketih said. “I was working and he called me and he said ‘hey, dad I just got an offer from an NFL team’. It was a long story … we decided to surprise his mom later on. It was quite a shock. We knew it was kind of his goal at that time to move from the college ranks.”

After three seasons with KC, Ryan found his team rolling through the playoffs and eventually traveling to Miami for the championship game. Through all of that, he brought his family along.

That’s been part of the joy of working for an NFL team in the Midwest. Ryan was out in California before, and now he’s in the same time zone as the rest of his family.

“We only got out there [California] one time,” Keith said. “Once we found out he would be that close we knew we would see him a lot more and NFL has a lot more leeway than college does.”

“We follow Ryan wherever he’s been,” Keith continued. “I was always Chicago Bears fan, but obviously I’m a huge chiefs fan now.”

“We’re so used to seeing him and his mannerisms we can pick him out immediately,” Keith laughed.

Keith traveled with his son throughout the playoffs, an experience he won’t soon be forgetting. They traveled with the families of the players and coaches, meeting plenty of people along the way.

“The game was just the icing on the cake,” Keith said.

He was about twelve rows up for the comeback win against the 49ers.

It was the same thing for the AFC Championship, where he moved to the field for the trophy presentation. He said that feeling at Arrowhead Stadium was one of the memories he’ll never forget.

“We got to go on the field afterwards for the trophy presentation, and that was amazing,” Keith said. “I think there were 75,000 fans at Arrowhead and nobody left. It’s almost like now I know what these athletes feel like when they’re down playing. Just wow.”

Now that he’s back in Illinois, the fun hasn’t stopped for him as a parent. Keith says everywhere he goes it comes up. He went to the bank and had tellers coming out from around their desks and bankers from their offices to hear thrills of the game.

He stopped at Subs-To-Go in Albany for lunch and was asked to show off pictures from his trip.

Even in the checkout line at Hy-Vee, he said a small “Go Chiefs” to a fellow in a Kansas City hat and the conversation came back to the Super Bowl trip.

It’s one of the benefits of a small town – the entire community is celebrating with Keith, Ryan and the Reynolds.

“Our whole family back home here, so many people who know us and have become chiefs fans because of it,” Keith said. “Every where I go.”

It’s not something that’s going to get on Keith’s nerves any time soon. He loves talking about the experience and about the accomplishments of his son – a proud father in every way. Like he said, the Super Bowl was just the icing on top – the real win was what Ryan has accomplished.

“I’ve talked about him for years and brag about him, I’ve been hoping he got some recognition locally so everyone can know what he’s done,” Keith said. “We knew what he’s been through and how hard he worked to get where he’s been, and he’s amazing.”