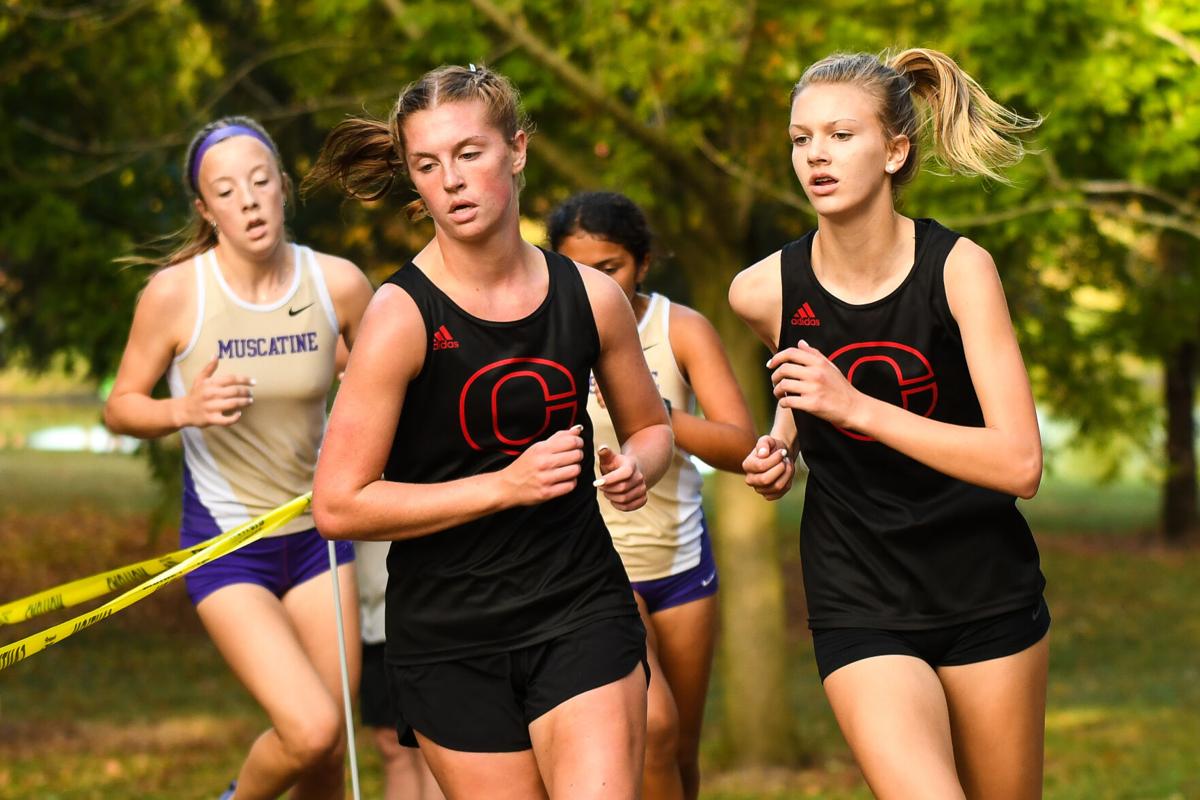 Clinton’s Abby Struble and Madelyn Robinson round a corner during the Jim Hetrick Invitational on Thursday afternoon in DeWitt. 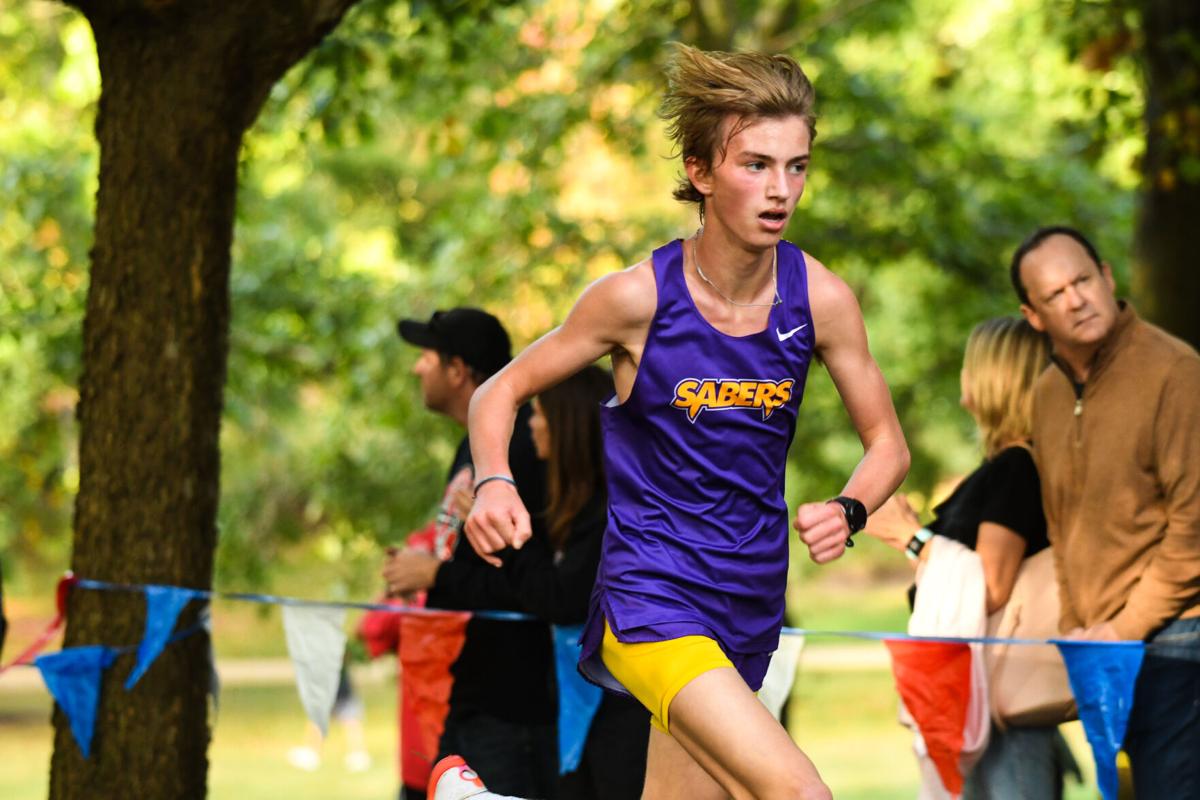 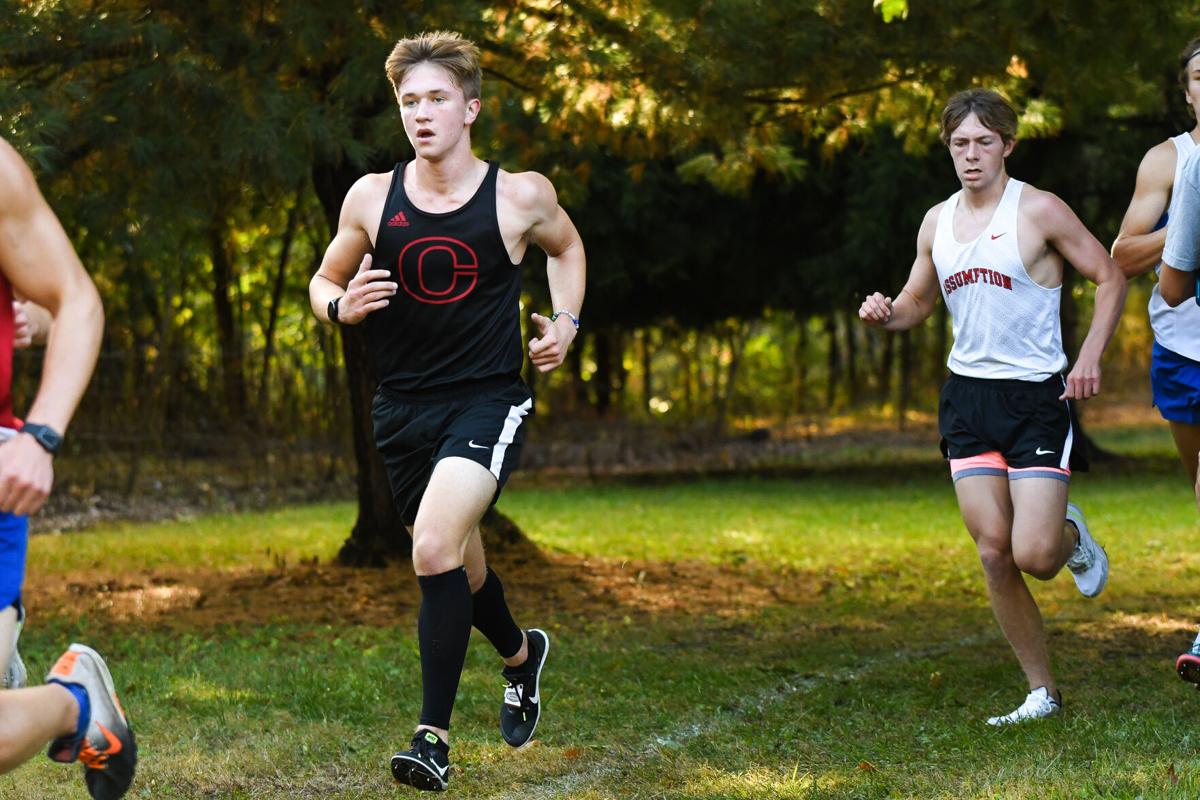 Clinton’s Luke Jennings tries to catch a runner during the Jim Hetrick Invitational in DeWitt on Thursday. 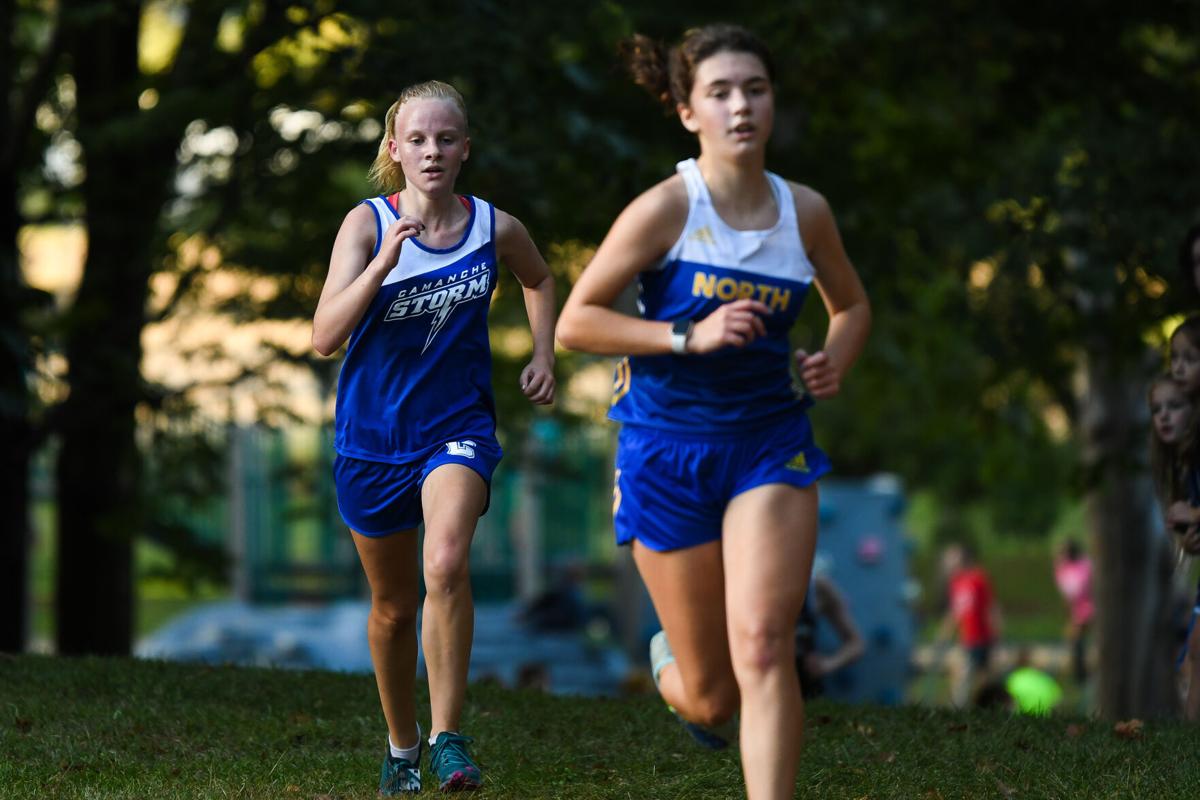 Camanche’s Gretchyn Fairlie tries to pass a runner at the Jim Hetrick Inviational Thursday in DeWitt.

Clinton’s Abby Struble and Madelyn Robinson round a corner during the Jim Hetrick Invitational on Thursday afternoon in DeWitt.

Clinton’s Luke Jennings tries to catch a runner during the Jim Hetrick Invitational in DeWitt on Thursday.

Camanche’s Gretchyn Fairlie tries to pass a runner at the Jim Hetrick Inviational Thursday in DeWitt.

DEWITT - Even with questionable weather kicking off the day, local runners got a beautiful afternoon for the annual Jim Hetrick Invitational at Grace Lutheran Camp in DeWitt on Thursday, giving them a gauge of where they sit heading into the tail end of the season.

With conference cross country meets happening next week and state-qualifying the week after, local runners got a good taste of where they sit – especially with a 20-team field in DeWitt.

The highest local finish of the day came from Prince of Peace’s Marcus Blount. Blount finished fifth in the varsity boys’ race. Blount finished in 17:40.8, the only competitors ahead of him coming from 3A and 4A schools.

Blount will be aiming for another trip to the state meet when he runs Class 1A state-qualifying in two weeks. Before that, he has the Tri-Rivers Conference Championships to take on.

The Irish boys didn’t have a team Thursday due to injury. Their next highest finisher was Tate Ruden.

“Tate had a good race,” Howard said. “He broke 20 [minutes] for the first time on Monday and did it again today. He’s been really dropping times.”

“I feel pretty confident, especially with conference coming next week,” Sattler said. “I feel like I’m peaking at the right time, tapering where it needs to be tapered and confident going into the next meet.”

Ethan Buer and Luke Jennings came in back-to-back, both within one second o each other and placing 26th and 27th respectively.

The River Kings finished fifth as a team overall in the Class 3A/4A division. They run a the Mississippi Athletic Conference Championships next week.

“For the boys, our team goal really is to get ourselves in the top three MAC teams,” Sattler said. “We want to fight with some of those guys and really get up there and compete.

“I think he’s performing well,” Camanche head coach Erin Montgmery said. “This was a big meet for him to practice getting himself in top 10, top 15 position. I think this is a good practice meet for that.”

“Lucas, we’ve talked to him, he has every potential to qualify for state,” Montgomery said. “He’s an amazing practice runner – we just want to get on him and get him pushing up towards Andrew in races.”

The Storm finished third as a team in their class. Butt is the only returning state qualifier on the squad this year.

The Rebel boys finished second as a team in the Class 1A/2A division, behind Monticello. All six Northeast runners came in within 30 runners of each other.

“Today, they all finished under 21 [ minutes],” Northeast head coach Trenton Weaver said. “To do that as a team, that’s what wins meets. They have each others backs, so if someone is having a bad race they’re there to pick their teammates up.”

Central DeWitt, who finished ninth in their division, was led by a 14th place finish from Ben Zimmer. Zimmer came in at 18:02.4 for the Sabers.

On the girls’ end, the best finish of the day came from Camryn Sattler of the River Queens. The sophomore came in 7th in 20:00 flat.

“I’m feeling really good,” Sattler said. “It’s later season and I’m excited to see the hard work come together. This race really showed me where I can be for conference and districts. I really think that if I switch up a few more things I can really be at my full potential.”

The Clinton girls finished seventh as a team. Madelyn Robinson clocked in at 21:58.2 and Abby Struble came in at 22:26, both in the top 50 competitors.

Sattler will be aiming for her second straight trip to Fort Dodge when state-qualifying rolls around in two weeks.

“I want to focus on my mental, not overthinking. All the work has been done and my coaches know that – I’ve been hitting my goals. I want to keep pushing myself and not get too comfortable.”

The best team finish from local girls’ teams came from Northeast, who came in second in the Class 1A/2A division just like the boys. The top finish of the day was Cenady Soenksen, who passed a final runner on the hill-top finish line to take 17th in 21:00.3.

“This is the first race I actually got the kick at the end,” Soenksen said. “Over on the other hill, I got a couple people there, too. I know that the downhill will get you through the pain, so I push myself on those hills.”

Natalie Krogman and Jeorgia Neumann both finished in the top 35, not far behind Soenksen.

Camanche’s Gretchyn Fairlie finished in the top half of the field, crossing the finish line in 22:50.2 to lead the Storm. Camanche came in fourth as a team, beating Wilton.

Conference meets take place next week for local teams, with state qualifying coming the week of the Oct. 18.