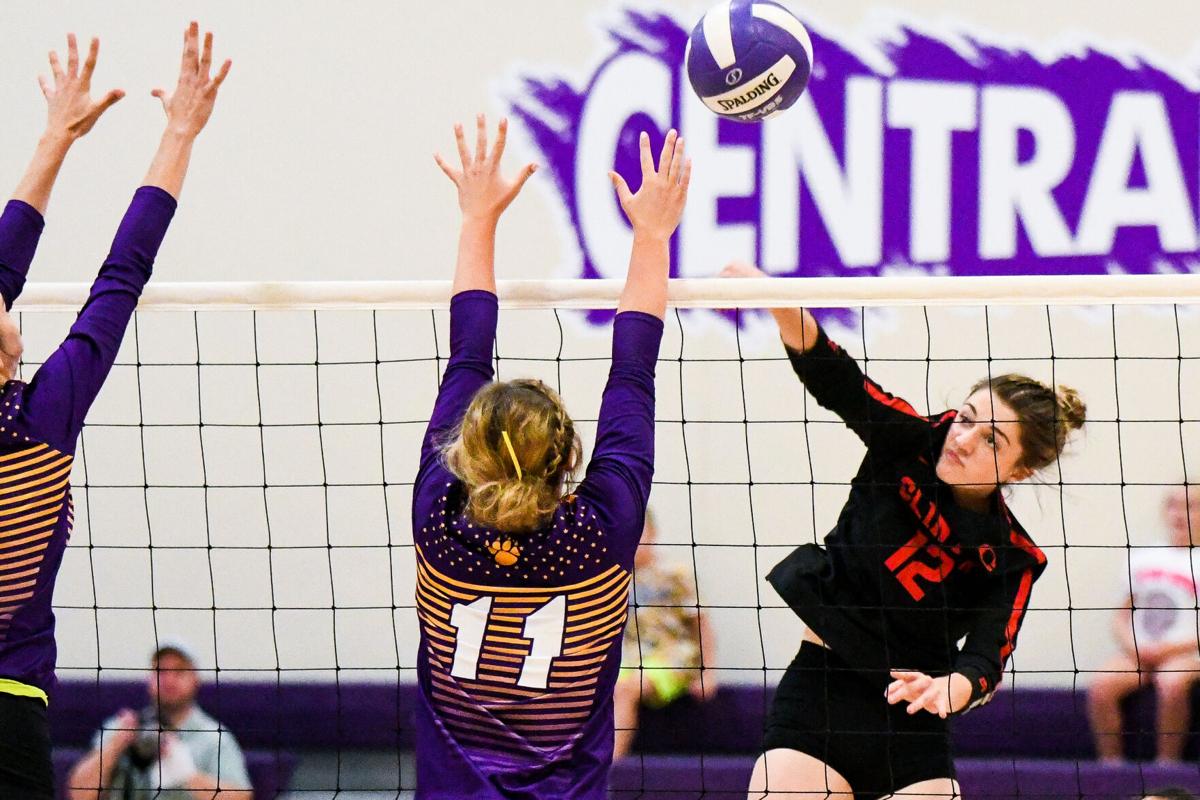 Clinton junior Megan Kelly hits a ball from the outside against DeWitt’s Allie Meadows during Clinton’s 3-0 volleyball sweep over the Sabers on Tuesday night in DeWitt. 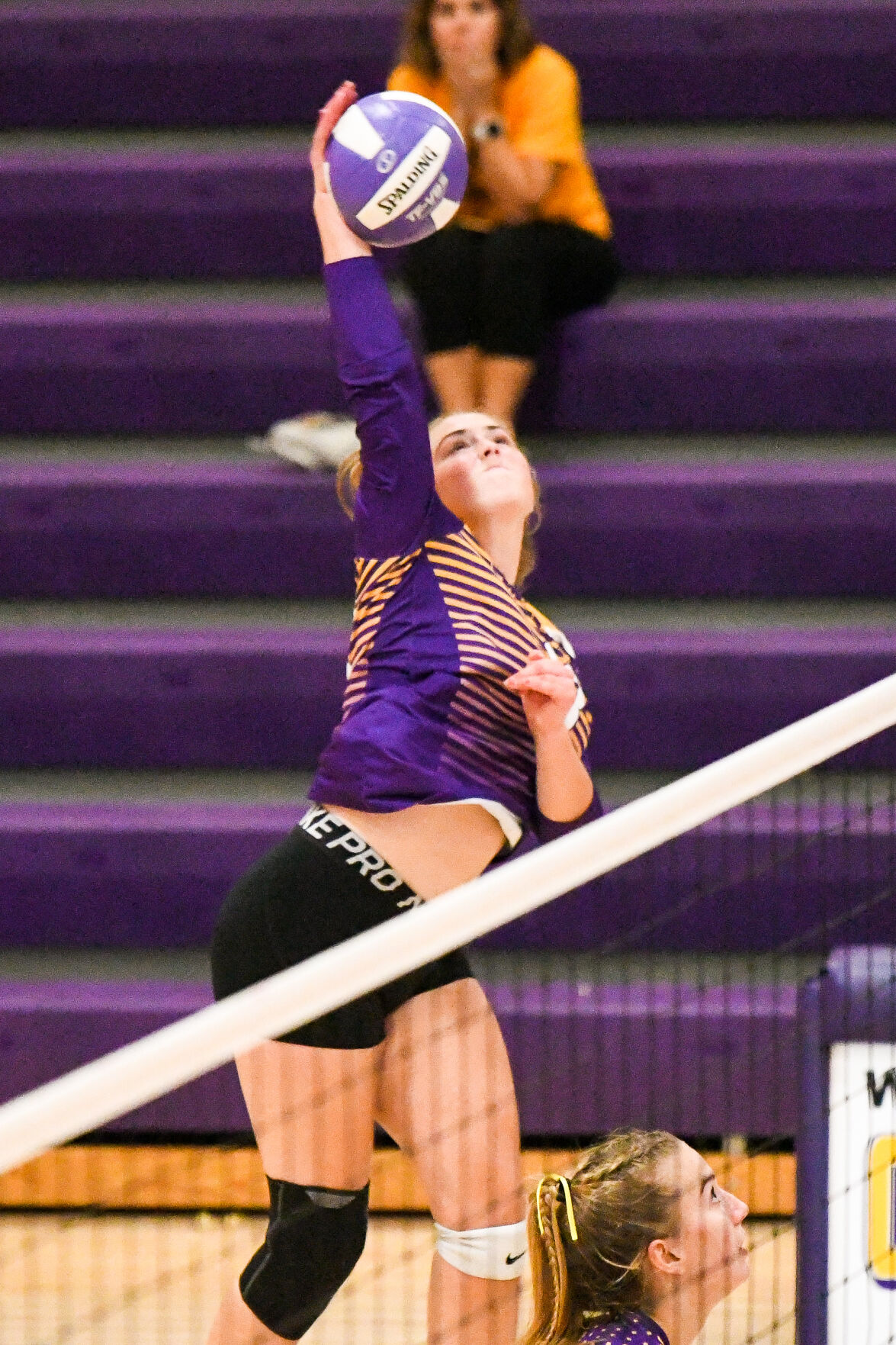 DeWitt’s Hannah Palzkill takes a swing from the outside hitter position during the Sabers Mississippi Athletic Conference loss to Clinton Tuesday night. 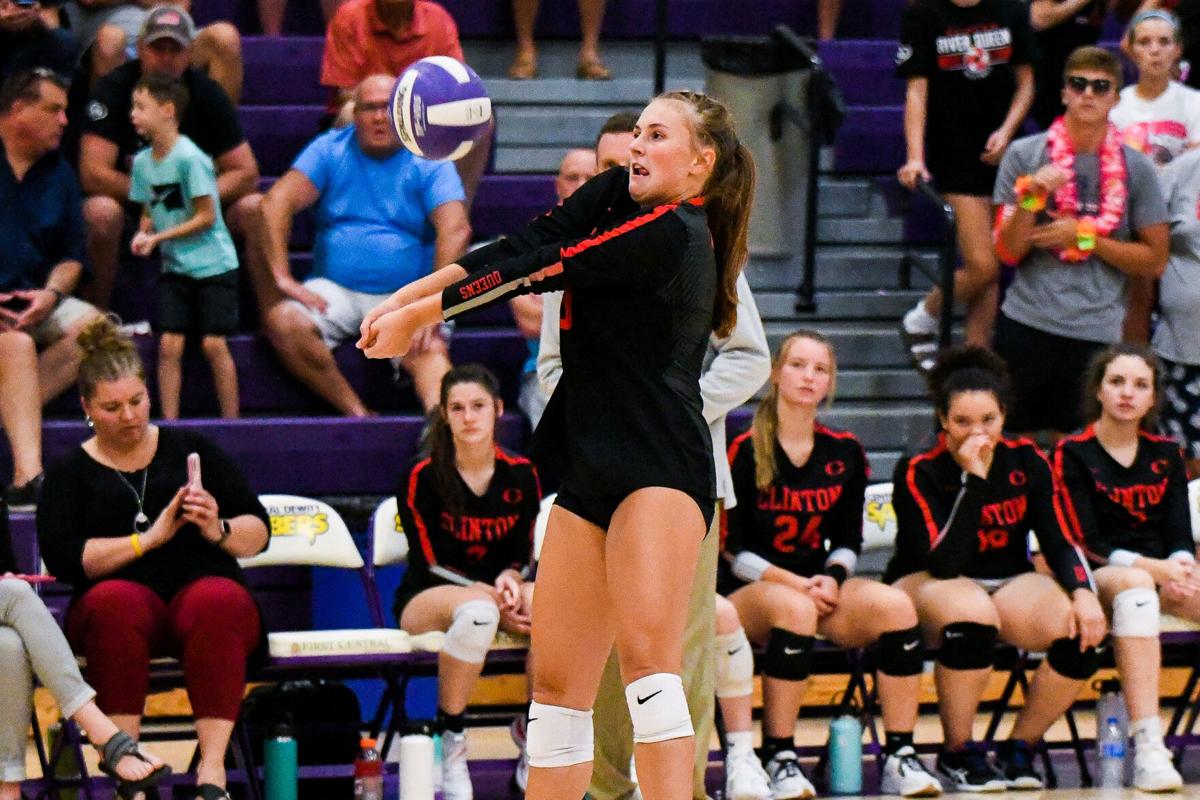 Clinton junior Megan Kelly hits a ball from the outside against DeWitt’s Allie Meadows during Clinton’s 3-0 volleyball sweep over the Sabers on Tuesday night in DeWitt.

DeWitt’s Hannah Palzkill takes a swing from the outside hitter position during the Sabers Mississippi Athletic Conference loss to Clinton Tuesday night.

DEWITT – A local Mississippi Athletic Conference matchup ended in a Clinton volleyball sweep on Tuesday night as the River Queens took down Central DeWitt 3-0 on the Sabers’ home court.

They had started the season against top-ranked North Scott and then played another state-ranked team in Bettendorf.

“It does feel good to get this win out of the way,” Clinton head coach Micah Cewe said. “We got that first set against North Scott but had to learn how to win. With Bettendorf, we got two sets. Tonight, we were able to put together three solid, consistent sets – something we weren’t able to do up to this point. That was good to see, especially on the road.”

Each set had moments where the two area teams seemed locked in and even, but each one ended up in ruts. For the Sabers, their own mental mistakes ended up costing them in the end.

The height and experience-laden DeWitt team saw big hits and eight team blocks from their front row, plus impressive serving runs that got them within striking distance of Clinton leads multiple times. Hannah Palzkill had seven kills for the Sabers, while both Ava Morris and Isabelle Pierce had five a piece. But – a big play from the River Queens had a tendency to turn into some kind of error for the Sabers on the next serve.

“We talked about it after the game, when we execute what we do we play pretty well,” DeWitt head coach Lee Swanson said. “When we get a little timid and out of sync a little bit, we didn’t attack. We looked scared and not aggressive. You have to be aggressive.”

The Sabers were also playing in a new rotation for the first time in competition. They got out of that multiple times, losing four points to rotation errors throughout the night.

“Somehow, our first server missed the serve and then it was a mess,” Swanson said. “I’ll take responsibility for that, it’s on me. Once that first person got skipped, it snowballed.”

Serve receive was also a struggle. The River Queens served eight aces throughout the game.

“We have to pass better,” Swanson said. “It all starts there. We’re very athletic.”

After taking a lead in the first set, the Sabers had crawled back in to tie the game up. Some big net play from middle hitter Kailyn Graves and serving from Mya Price took the Queens on a 6-point run.

Graves notched the kill in the first set to end things, but went down with an ankle injury on the play. Sophomore Mia Tubbs subbed in for her and the rest of the front row played with a new rotation.

They didn’t skip much of a beat. Leading the way was Makayla Howard with 15 kills and Megan Kelly with another seven.

“They’ve all had an opportunity to play,” Clinton’s Cewe said. “When Kailyn went down, it was heartbreaking to see, but Mia was able to come in for her. They got it done.”

The second set went almost identically, with the Queens pulling away in the second half.

The third and final set of the game saw Clinton jump out immediately. Central DeWitt switched things around and made a run of their own behind serves from Lexy Cooper and Ashli Bossom. A few aces in that mix, and it seemed like Clinton was in their own heads with mental mistakes on their side of the court.

“There are a lot of things we have to clean up,” Cewe said. “I think the main thing was defensively, this was the best we’ve played all year long as a group.

“After this weekend we lacked some team cohesion and energy so we did a couple things yesterday, some team bonding stuff, and just putting the tangibles into practice.”

The Queens rallied, and a final kill from Megan Kelly sealed the game.

“We have to look like we’re having fun,” DeWitt’s Swanson said after the game. “We don’t get excited and in volleyball it’s energy and emotion. One big play builds off another big play. We’re so in our shell sometimes we’re not having fun playing the game.”

And Cewe about the Queens: “We did an excellent job of celebrating every play, meeting back in the middle. It gave us a little extra spark tonight.”

The Sabers (5-3, 1-2) will play next Tuesday against Davenport North to continue conference play.

The Queens (3-8, 1-2) look to the North Scott Invitational on Saturday morning, playing Davenport West for their next MAC matchup in a week.

DAVENPORT – A baffling 17 service aces off the hands of Maizie Wicklund helped Unity Christian to a 3-0 sweep of Morningstar Academy on Tuesday night on the road.

“Overall the girls served really well,” head coach Jana Behr said. The Knights ended with 31 total team aces in the three sets. “I was happy to see the girls stayed focused and adjusted to playing with several different people. It was nice to get some playing time for some of the other players.

Allison Tegeler had three kills for the Knights as well.

The Knights move to 3-0 in the conference and play Thursday night on the road at Galesburg Christian.

FULTON, Ill. – The Fulton volleyball team couldn’t hold off a powerful Eastland attack and fell in two sets on Tuesday night at home.

Ten hitting errors and five serving errors contributed to the night. Brooklyn Brennan led the offensive effort with three kills, no other player downing more than one.

Brooklyn Brennan, Gracie Sanderson and Ava Bowen all had three digs a piece.

Fulton has a quick turnaround with a game on Thursday, welcoming Forreston to their home court.