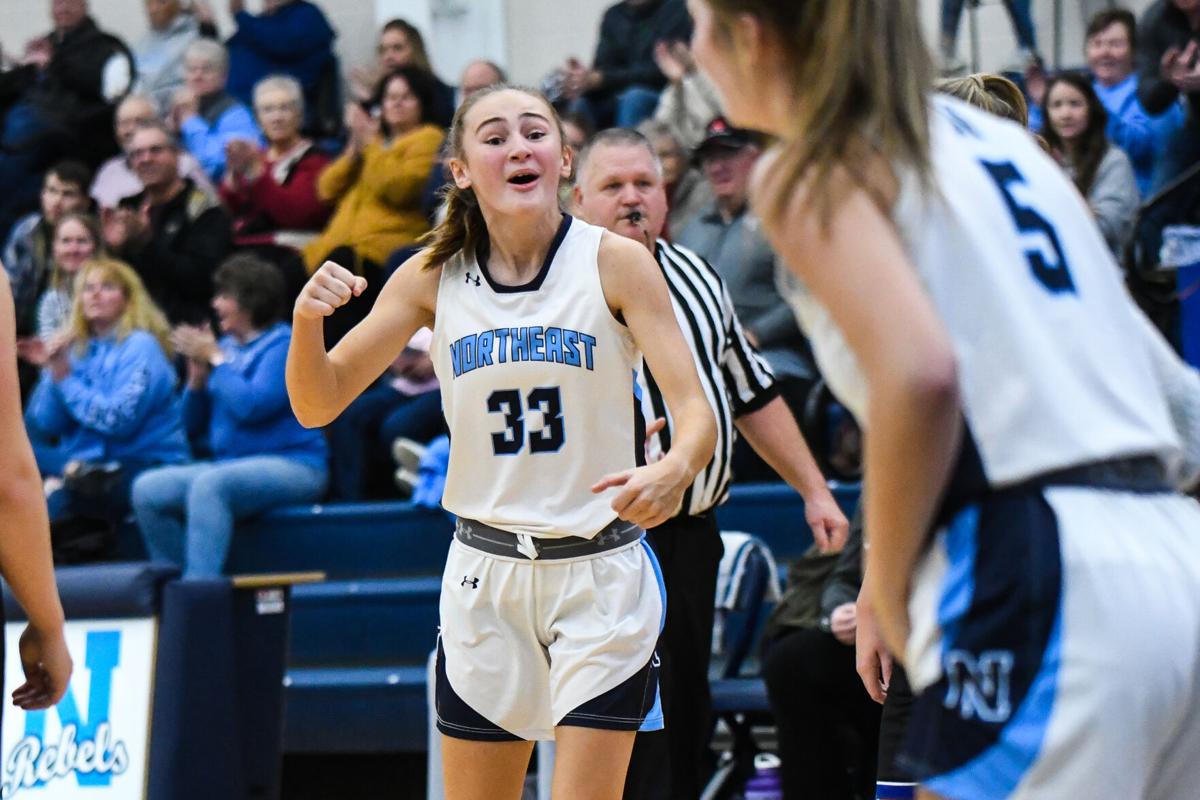 Northeast’s Jeorgia Neumann reacts after a basket by Leah Mangelsen during the Rebels’ win over Anamosa Tuesday, Dec. 7 at home. 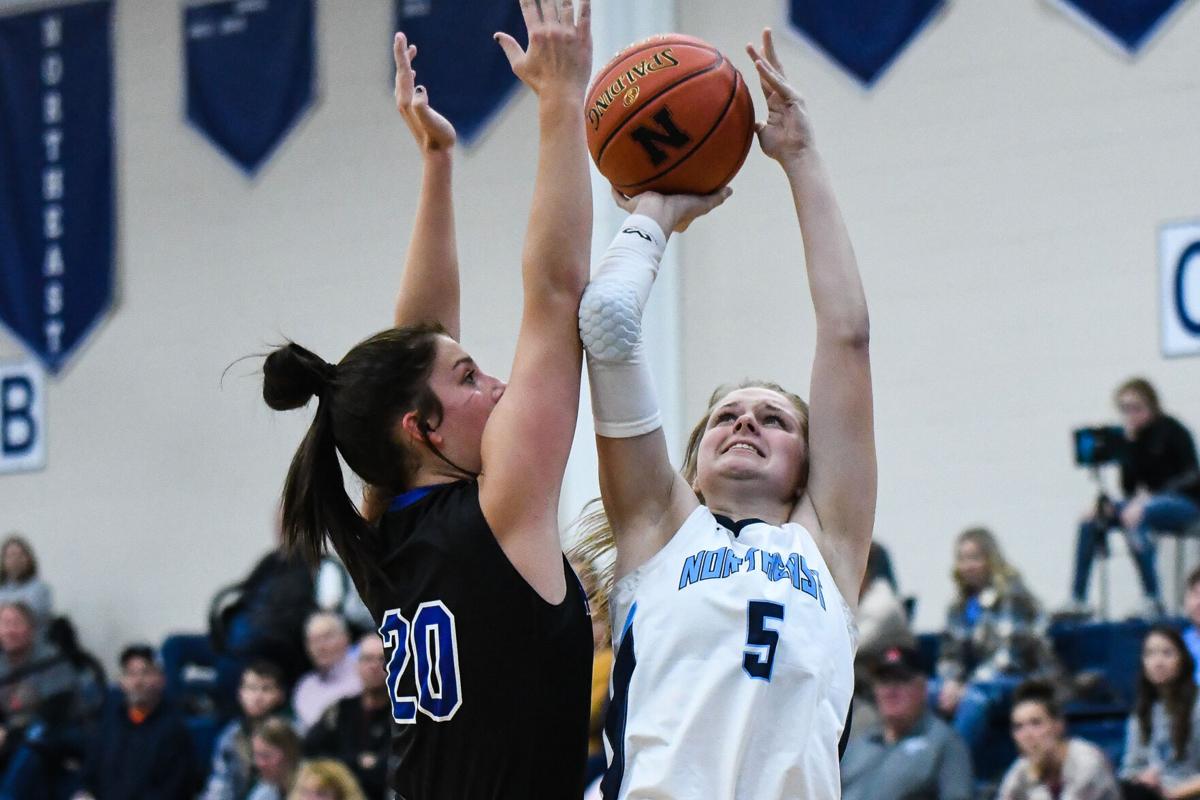 Northeast’s Leah Mangelsen puts up a shot from the block during the Rebels’ win over Anamosa Tuesday, Dec. 7 at home.

Northeast’s Jeorgia Neumann reacts after a basket by Leah Mangelsen during the Rebels’ win over Anamosa Tuesday, Dec. 7 at home.

Northeast’s Leah Mangelsen puts up a shot from the block during the Rebels’ win over Anamosa Tuesday, Dec. 7 at home.

GOOSE LAKE – The Northeast girls started their week with a dominant victory over Anamosa at home, taking down the Blue Raiders 53-23.

After taking a 12-5 lead in the first half, the Rebels exploded both defensively and offensively. After a turnover on the Northeast end, Alyssa Fowler blocked the layup attempt on the other end to get the bench up and excited. Next possession, Fowler came out of the cluster and took a fast break to the hole herself.

Right after that, Brynnlin Kroymann pushed her way through traffic for a bucket.

Leah Mangelsen forced her way up from the right block, making the shot and getting the foul for the three-point play. That gave the Rebels the 21-7 lead and forced the Raiders to a timeout.

Northeast had the 32-8 lead at the half and cruised to a victory.

The Northeast boys’ basketball team also picked up a win on Tuesday in front of the home crowd, downing Anamosa 56-46.

The Rebel girls (2-3) and boys (4-0) play at Tipton Friday night in another River Valley Conference game.

CAMANCHE – The Camanche girls picked up their first victory of the year with a 49-34 win over North Cedar at home on Tuesday night, led by five three-pointers by Emerson Crigger.

“We had a good game plan tonight and all of our ladies contributed,” head coach Andrew Carbajal said. “Bridgette [Hundley] and Aubrey [Carstensen] played huge on defense and our shooters came alive.”

The Storm had 10 three-point shots overall as a team. Miley Duritza hit three in the first half and finished with 11 points. Crigger finished with 16 points for the Storm, draining five total.

The Storm only allowed one point in the first quarter and had the 26-12 lead at the half.

“I’m extremely proud of how our girls played,” Carbajal said.

NO. 3 SABERS SQUEAK BY BULLDOGS

DEWITT – The No. 3 ranked Central DeWitt girls rebounded from a Mississippi Athletic Conference loss last week with an overtime victory over Bettendorf at home on Tuesday night, winning 59-55.

Taylor Veach led the Sabers with 21 points and nine rebounds, including five points in the overtime period.

Allie Meadows also had 21 points for the Sabers,

DELHI – The Maquoketa Valley Wildcats, who had graced the 1A rankings at the beginning of the season, were too much for the Easton Valley girls Tuesday night. The River Hawks fell 54-20.

The River Hawks recorded 27 turnovers on the night.

Renee Hartung had the highest point total for Easton Valley with five on the night. Josie Wood and Emmah Johnson both added four a piece.

TROY MILLS – The ranked North Linn Lynx rolled over Prince of Peace in both the girls and boys games, the Irish falling on the road.

Sarah Moeller had 21 points for the Irish, while Lilly Isenhour had 11 points and 10 rebounds. Hakael Powell led the scoring for the boys with eight and Eric Berry added another seven.

The Irish will welcome Edgewood-Colesburg to the Joe O’Donnell Sports Center in Clinton on Friday night.