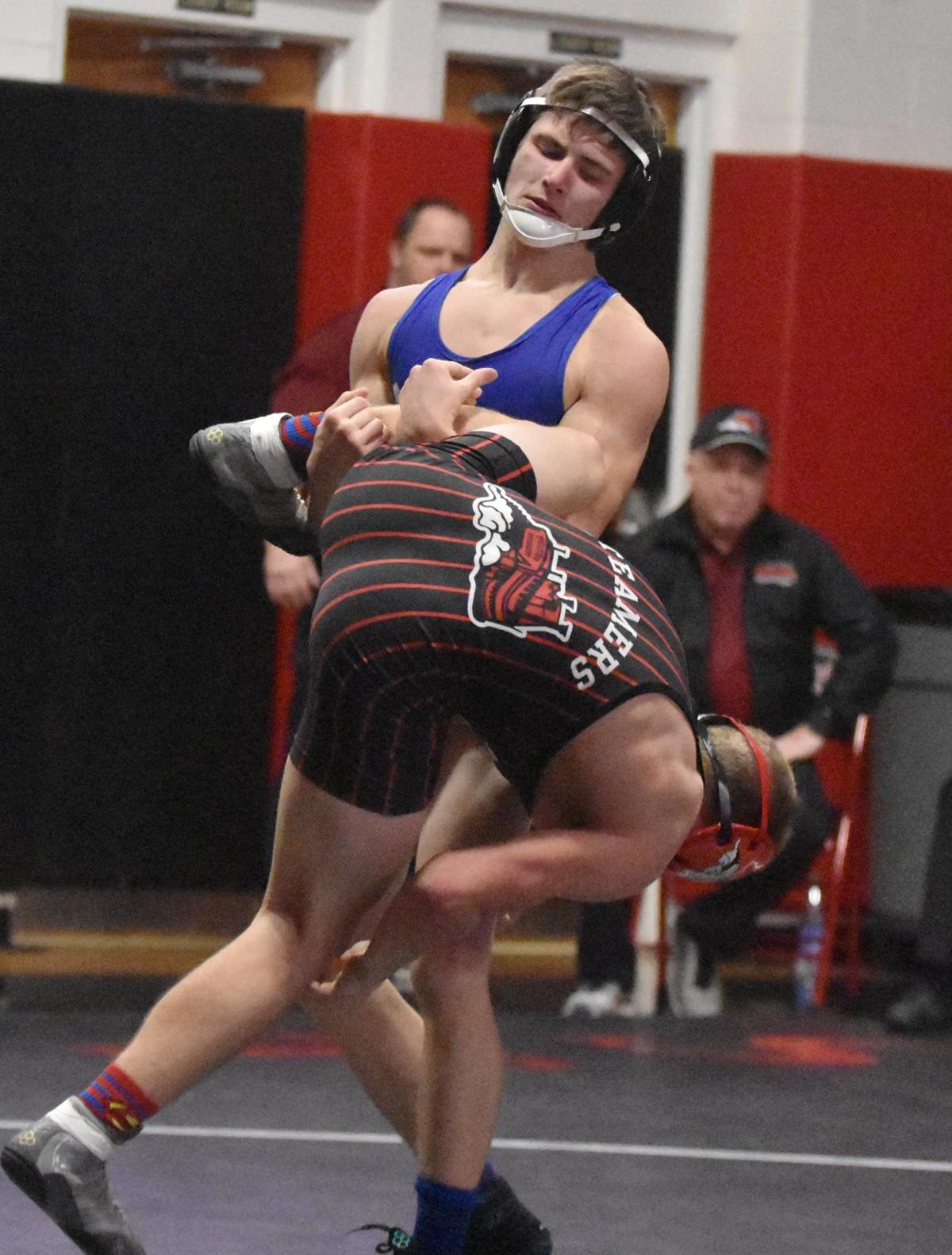 Camanche senior Ben Vogel gets a takedown right before a pin during duals at Fulton High School earlier this season. 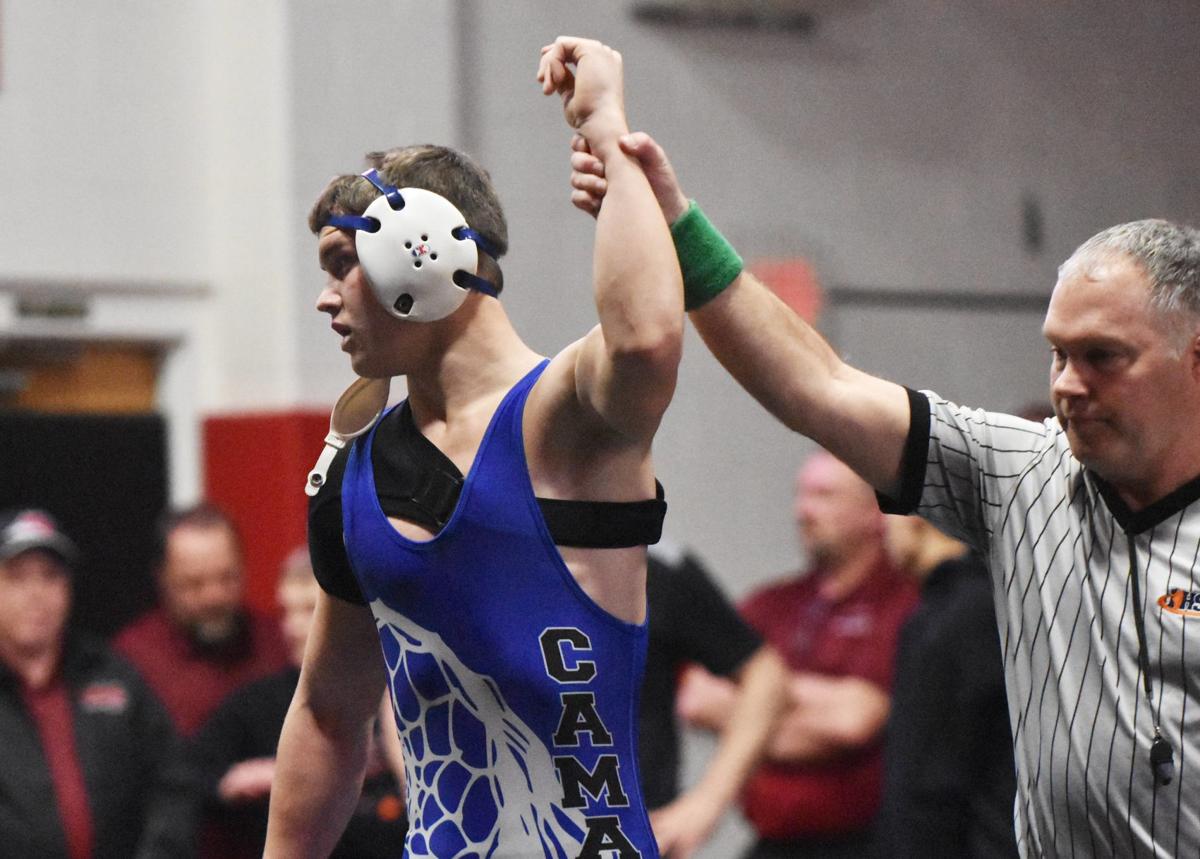 Camanche senior Ben Vogel gets a takedown right before a pin during duals at Fulton High School earlier this season.

It’s a hard thing to fall a match short of the Iowa High School State Wrestling Tournament, and one off day can swing it out of your favor.

Both Cade Everson and Ben Vogel of Camanche made it to the district wrestling meet in 2019, before being met with a tough bracket and falling short of state qualifying. This year, they’re ready to take that next step.

Especially Vogel. It’s his senior year, after all, and he’s been a district qualifier two years running.

“It told me that I was one step away … sophomore and junior year,” Vogel said. “I knew I was right there, so close to breaking through to the next level. It just motivates me for this year so that’s what I’m going to do.”

Vogel had wrestling instilled in him from the start. His father was a wrestler, and even his brother tried his hand at the mats. He says when you grow up in a household like that, it almost puts the grappler mindset into you before you even step into the room.

Plus, it gives him a loyal family following at each and every high school meet.

“My dad really pushes me to be the best wrestler that I can,” Vogel said. “You almost get put in wrestling before you get to decide if you like it or not. You just absorb everything and grow up being a wrestler.

“I feel like having brothers, it teaches you to have an aggressive mindset just between two people. It comes into wrestling a little bit.”

Vogel has always been scrappy, wrestling at 106-pounds his first two years. He moved up to 120 last season and now has acclimated to the changes.

He’s gotten stronger and he’s gotten faster, and brings a scrappy and determined mindset to the table.

“I’ve worked on my feet and getting better at takedowns,” Vogel said. “That’s what sets the pace during the wrestling match, and statistically gets you in the best position to win.”

He’s got some momentum heading into the weekend. Vogel was one of Camanche’s conference title winners last weekend, winning the 120-pound River Valley Conference championship round. He’s had a stellar senior season.

Although he’s anxious to meet sectionals on Saturday and then beyond, he’s ready. It’s been two years coming.

For junior Cade Everson, he’s ready too. He won sectionals last season before meeting a tough bracket, but has more confidence going into this season.

“[State has been on my mind] since I first saw the sectional and district set ups and saw what kids I’d have,” Everson said.

Everson also has a family background in the sport. His older brother, Brice, is a decorate wrestler out of Camanche who currently wrestles at Loras College. Brice has been an influence on his younger sibling.

“Every time he comes back he teaches me new stuff,” Everson said. “He’s taught me a lot, especially this year.”

Everson sports a quiet and serious demeanor and is down to business when it comes to Saturday. To improve, he’s focused on his foot speed and his movements. He’s confident if he takes what he’s practice in the room to the mats at Davenport Assumption, he’ll do just fine.

“I know that not many people can beat me on my feet,” Everson said. “I stay on my feet as much as I can, do what I need to do.

“Just stay on my feet, keep them from being on top as much as I can.”

Everson placed third at the RVC meet on Saturday.

The Indians head to Davenport Assumption with a number of ranked wrestler, including No. 1 ranked Eric Kinkaid. The sectional meet starts at 12 p.m. Saturday.