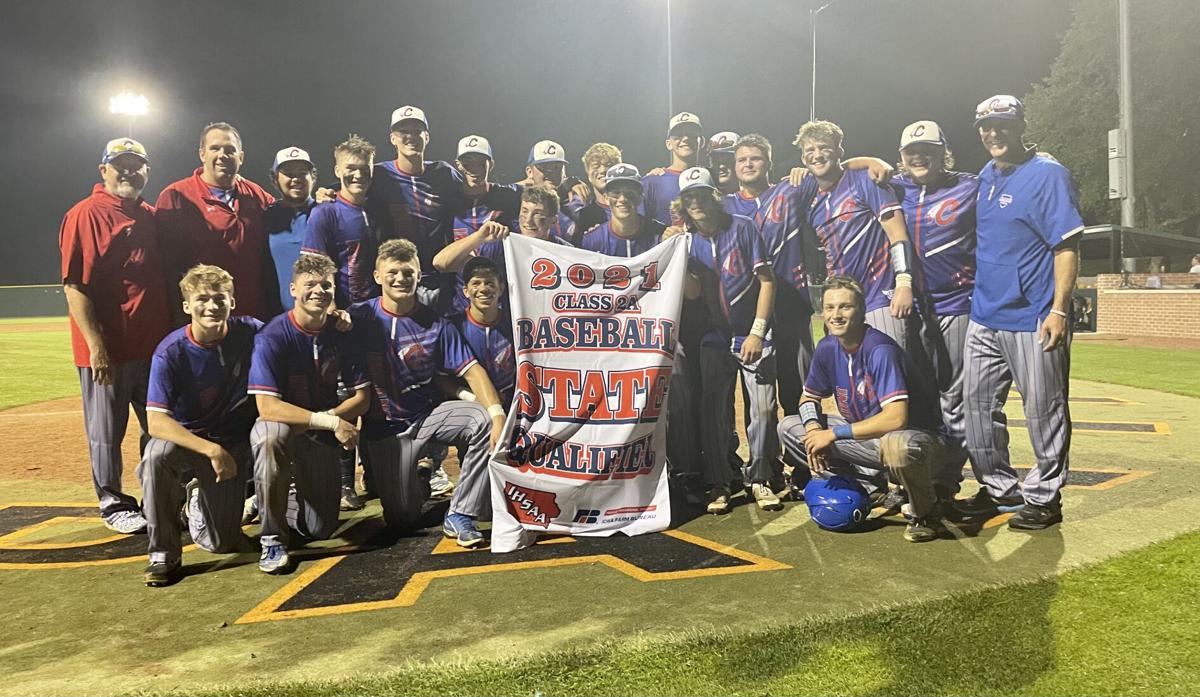 The Camanche baseball team poses with its state banner after defeating Beckman Catholic Tuesday at Solon. 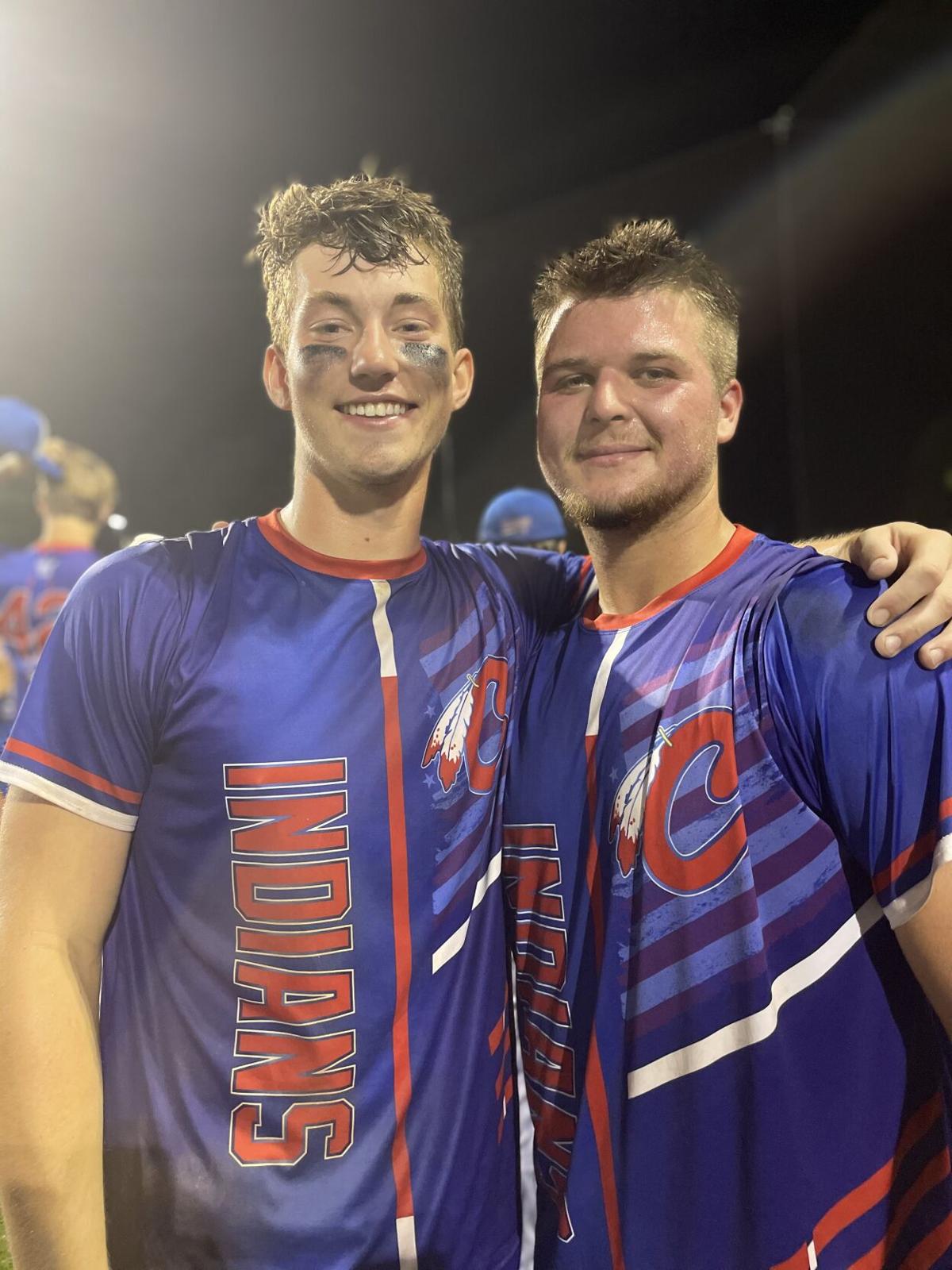 Mike Delzell and Mason Byrns pose after their win over Beckman Catholic Tuesday at Solon. Delzell had the game-winning hit and Byrns had a grand slam that got the Indians back in the game.

The Camanche baseball team poses with its state banner after defeating Beckman Catholic Tuesday at Solon.

Mike Delzell and Mason Byrns pose after their win over Beckman Catholic Tuesday at Solon. Delzell had the game-winning hit and Byrns had a grand slam that got the Indians back in the game.

Then, Mike Delzell took everyone’s breath away — including his own.

“That was awesome — I’m speechless,” Camanche baseball coach Darryl Cochran said. “It hasn’t quite sunk in yet.”

The win clinched the Indians’ first state tournament berth since 1996.

“I’ve been playing with these guys since I was five or six years old, so this feels super special to us, especially to do it for our school,” DeWeerdt said. “Twenty-five years — it feels great.”

Delzell went up to the batter’s box focused.

“I was trying to trust my approach, not get too over-excited, not get too happy in the box, just put a ball in play and drive it up the middle, not try to do too much — that’s the biggest thing,” Delzell said, out of breath and his voice hoarse after the game.

As soon as DeWeerdt saw Delzell walking up to the plate, he said there was no question — the Indians had it.

“I knew it was over,” DeWeerdt said. “I knew as soon as he got up to the plate, I was scoring. No doubt about it. Off the crack of the bat, right away I knew I was scoring. I didn’t even have to look at coach — I just went for it.”

Nobody could have guessed the emotional rollercoaster that awaited both teams.

Beckman scored eight runs in the fourth inning, then scored one more in the top of the sixth to go up 9-6.

In the bottom of the sixth, a guy by the name of Mason Byrns stepped up to the plate with the bases loaded.

Byrns smacked a ball to left field, sending it over the fence for a grand slam.

“I was just trying to put a good swing on the ball,” Byrns said. “I was trying to make hard, solid contact, that way we could get runners in scoring position for someone else to do it, but luckily I got it done on my own. I can’t be more happy for my team.”

DeWeerdt was on second base when Byrns hit the grand slam.

“I went to tag up and then I saw the kid in left just stand there and watch the ball go by,” DeWeerdt said. “I was jumping up and down and all of a sudden Mikey’s almost overlapping me and coach was like, ‘Slow down!’”

Dickherber was on third base.

“Right off the bat, I was like, ‘Oh man, that’s got a chance,’” Dickherber said. “In my head, I started saying some words that probably shouldn’t be put in the paper, but I was pretty pumped up.”

That put Camanche up 10-9 and gave the Indians all of the momentum.

But then the Blazers took it right back.

In the top of the seventh, with Byrns on the mound, Beckman’s Luke Schieltz crushed a solo home run, tying the game 10-10. Then, Nate Offerman hit an RBI single to give Beckman the lead back, 11-10.

Despite the turn of events, Byrns knew his guys would have his back.

With two outs in the bottom of the seventh, Dickherber was hit by a pitch. That brought DeWeerdt up to bat.

Beckman called a mound visit, then DeWeerdt fought in the at-bat to work up to a full count.

Dickherber never doubted him for a second.

“I was thinking about our district semifinal game and how the exact same thing happened,” Dickherber said. “Whenever he’s up to bat, I have a ton of confidence in him and I just trusted him again. If you trust your guys throughout the whole game no matter how many ups and downs there are, you’re bound to come out on top and luckily that’s what happened.”

“I went up there confident as I’ve always been this year,” DeWeerdt said. “I had Tucker on base again — every time I have Tucker on base, it’s like a 10-percent confidence booster for me. I love having that kid on base because if I put the ball in play, he’s going to advance, no doubt about it.”

“I think 10 percent might be a little low,” Dickherber said, laughing.

That brought Delzell up the plate for the winning hit.

“We’re competitors, we’re winners,” Delzell said. “We’ve been like that our whole lives, competing growing up, playing baseball together our whole lives, and being multi-sport athletes helps as well. Knowing what it takes to win, trusting what our coaches say — it’s all about hills and valleys, not getting too high, not getting too low, trusting we’re going to come through and win.”

Mason Byrns led all batters with seven RBIs on 3-of-4 at the plate. Garrett Schultz started the game, pitching three innings with one hit, two earned runs, four walks and three strikeouts. Byrns got the win and pitched four innings in relief with five hits, four runs (three earned), seven walks and three strikeouts. Beckman’s Logan Burchard took the loss on the mound.

“It was just a wild baseball game,” Cochran said. “Back-and forth — both teams battled like crazy. I’ve got to hand it to our guys, they kept battling and coming back, and coming back. I couldn’t be more proud.”

Camanche moves on to face Denver in a Class 2A State Quarterfinal 4:30 p.m. Tuesday at Merchants Park in Carroll, Iowa.

“We’ve dreamed of this since we we were all playing travel ball when we were younger,” Byrns said. “It seemed unrealistic coming from a not-as-good historically high school team, but we turned it around.”