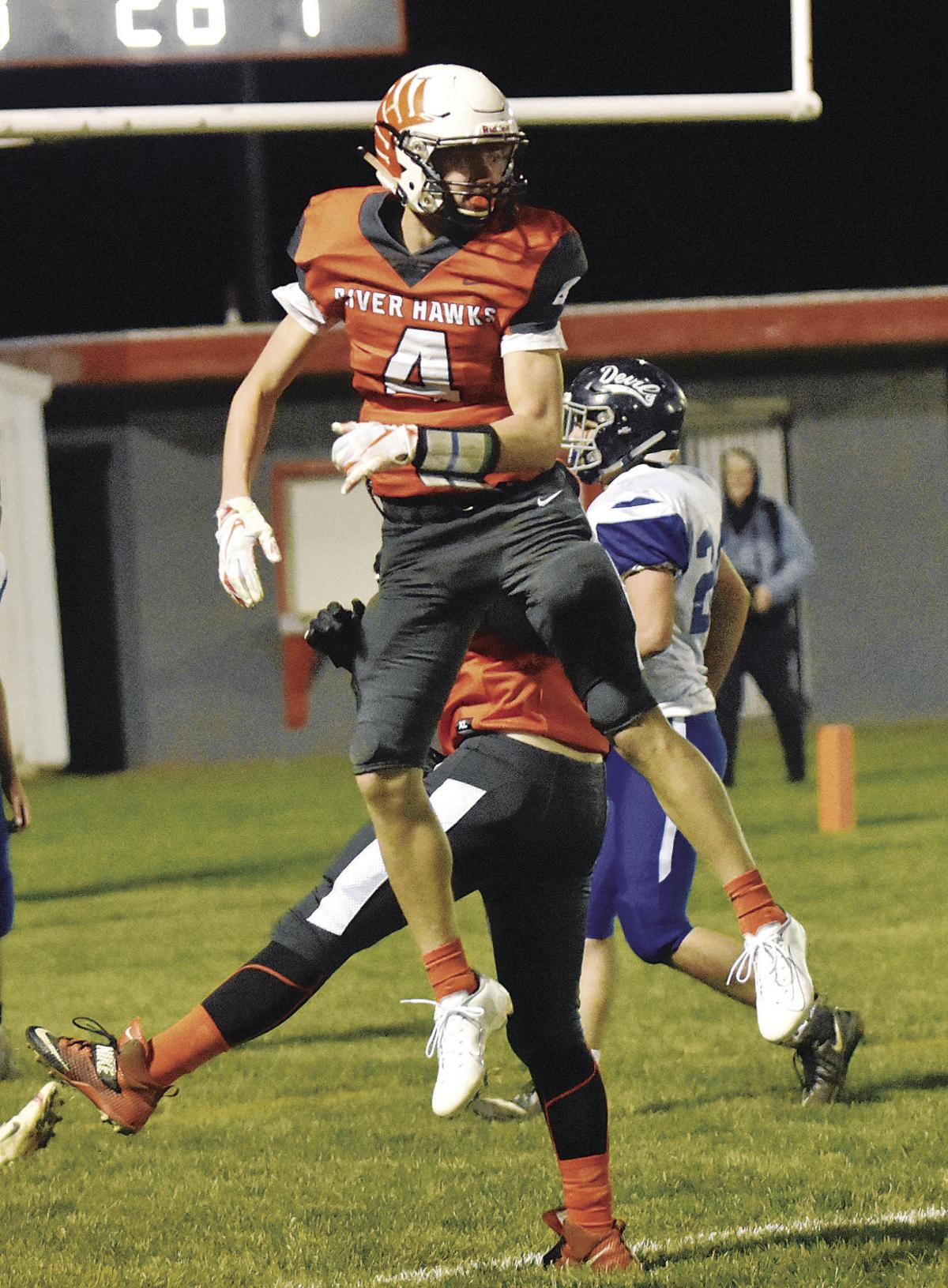 Easton Valley senior Braydin Farrell jumps up in celebration after one of the River Hawks’ first touchdowns in the first quarter on their way to a 73-6 win over West Central on Friday night in the regular season finale. 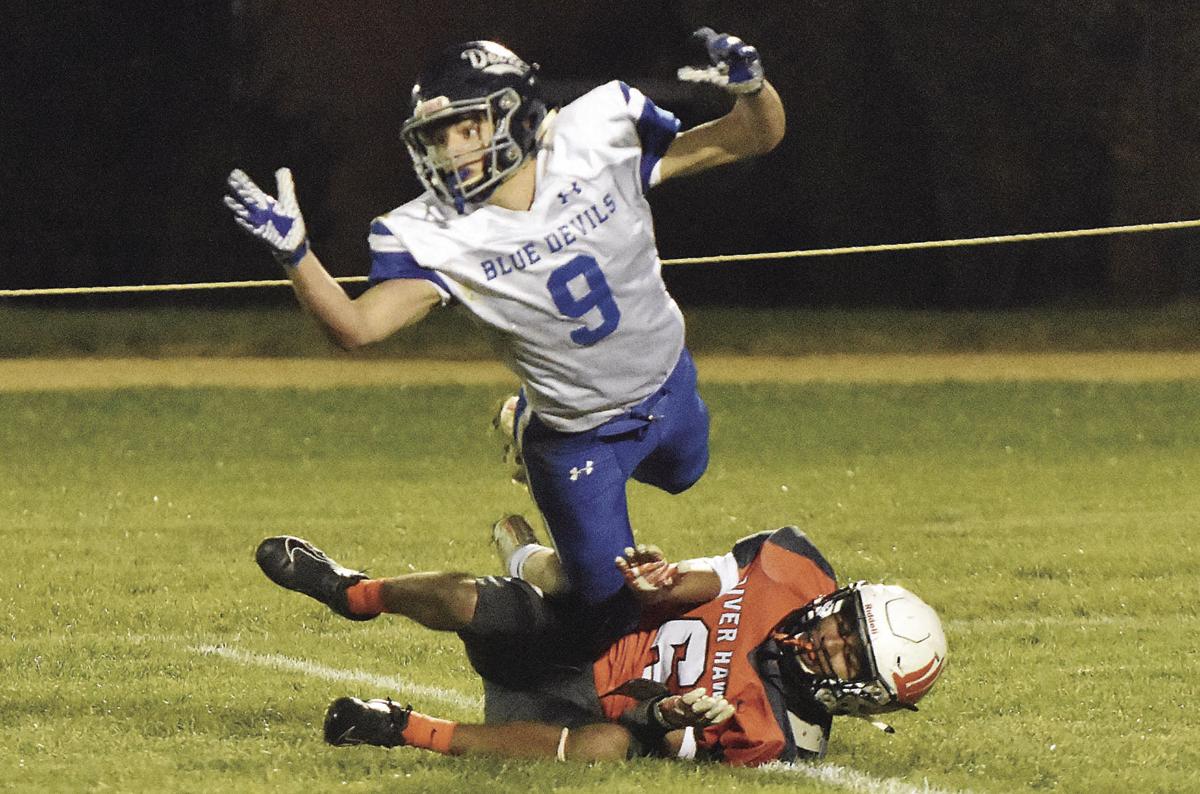 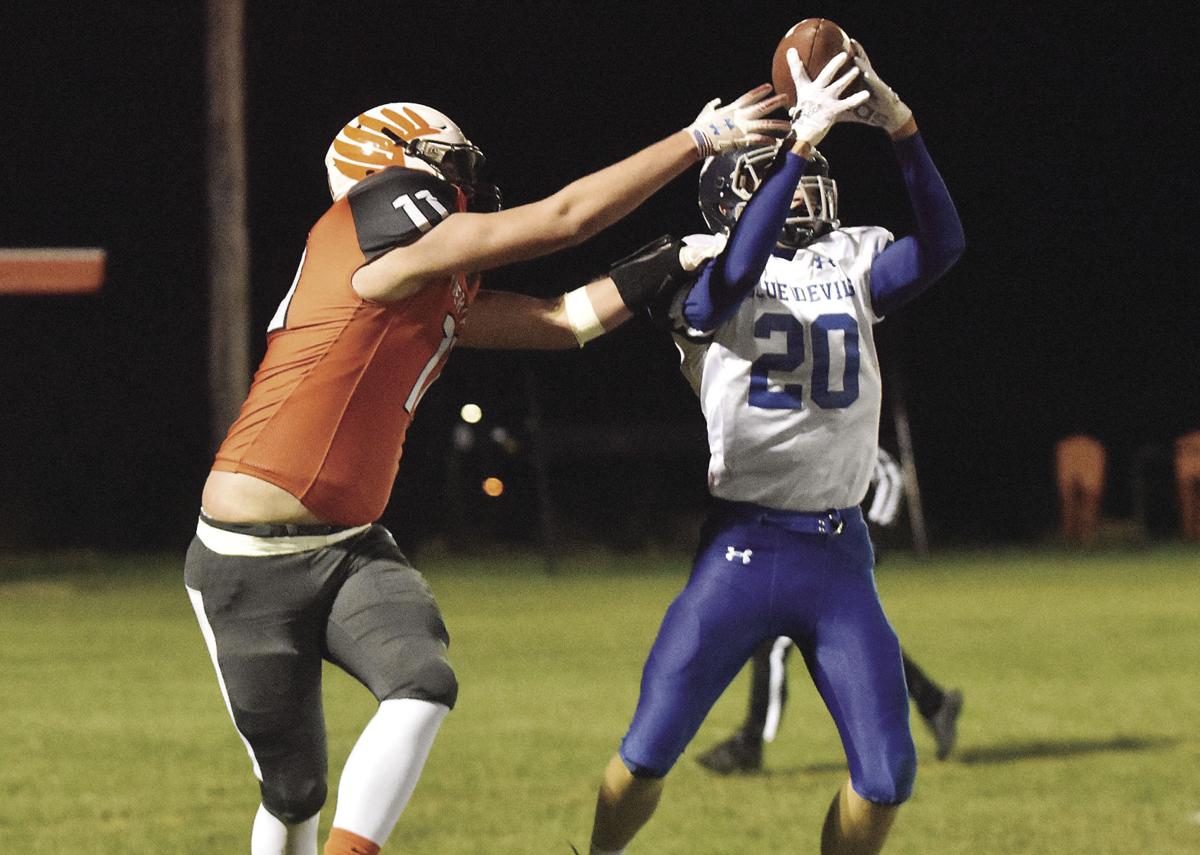 Logan House reaches for a pass from Nate Trenkamp, as does the Blue Devils’ defense, during Friday night’s Easton Valley win. 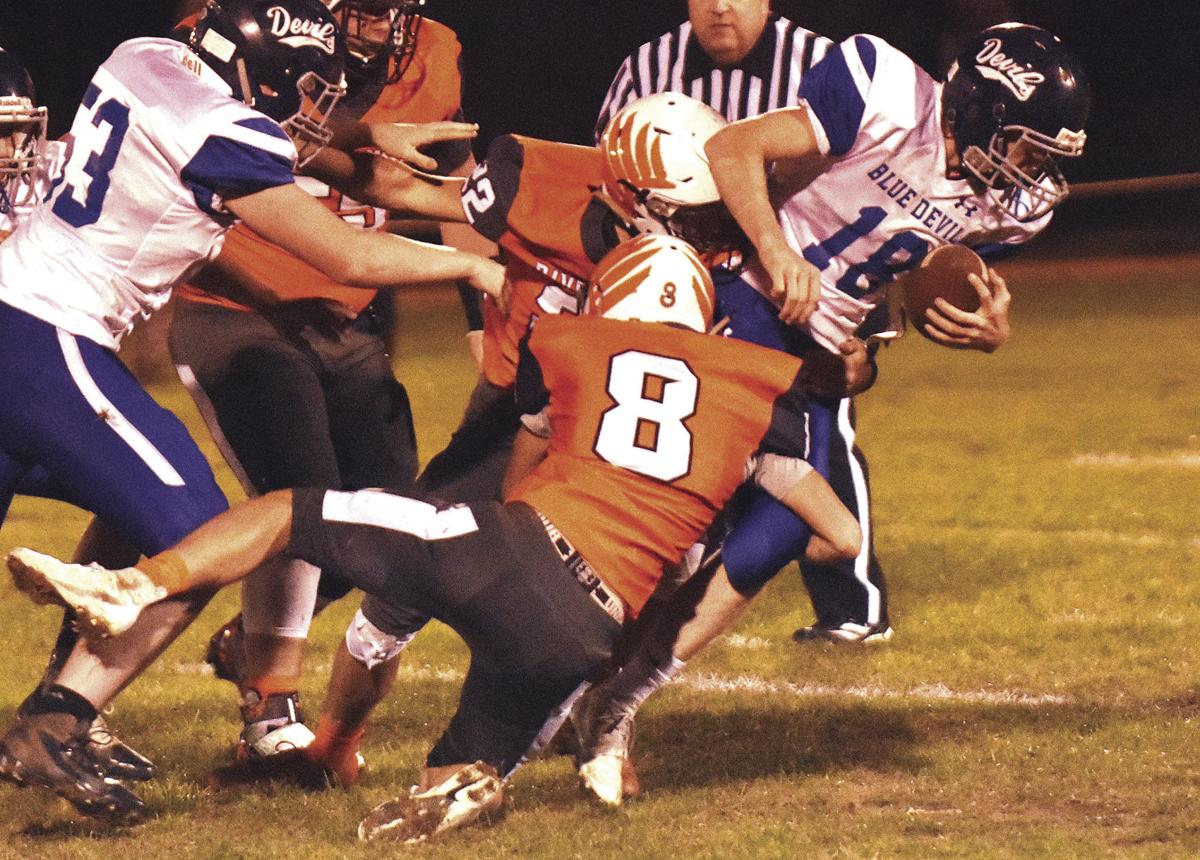 Easton Valley senior Braydin Farrell jumps up in celebration after one of the River Hawks’ first touchdowns in the first quarter on their way to a 73-6 win over West Central on Friday night in the regular season finale.

Logan House reaches for a pass from Nate Trenkamp, as does the Blue Devils’ defense, during Friday night’s Easton Valley win.

With just a handful of area teams headed to the postseason, going out on a high note was the plan for many.

PRESTON – The No. 8 River Hawks rebounded from their first loss of the year with a huge 73-6 victory over a winless West Central team on Friday night at Preston.

With just one blemish on their record (loss to No. 3 Turkey Valley, the River Hawks will be looking at the 8-man playoffs.

In a tweet after the game, head coach Tony Johnson addressed his seniors:

“Thank you seniors for your wonderful leadership and hard work. You make me so proud every time you hit the field. Now onto the playoffs. Let’s finish our journey and reach out goal.”

In front of a healthy home crowd in Preston, the River Hawks made it look easy from the get-go. After shutting the Blue Devils down on three downs, they made just two plays before senior quarterback Nate Trenkamp found a pair of hands with orange attached to them in the endzone for the first score of the game.

On the kick off after the score, Andin Farrell recovered a fumble and that, too, was converted into a touchdown.

Raabe scored again later in the first quarter on a quarterback keep, crossing the goal line at 1:52 and extending the lead to a commanding 32-0.

The River Hawks led by 53 points when the halftime break hit and they kept rolling from there.

Even with continuous clock, they scored just a minute and a half into the third quarter, jumping up to a 59-0 lead.

Eight different athletes, including six different seniors, were able to score on Friday night. Both Braydin Farrell and Porter Fuegen had 12 points each, while Cade Jargo, Kadin Graves, Gavin Raabe, Nate Trenkamp, Carson Fuegen and Reid Heinrichsen all also put in a score.

The River Hawks had three fumble recoveries, a pick and four sacks on the nigh as well.

WEST BURLINGTON – After a devastating loss last week, the Indians came out and dominated West Burlington on the road to close out their regular season.

The Indians beat Notre Dame 52-0 on the road to close out their season.

The Indians end their regular season 6-3 (2-2), picking up big milestones along the way like the biggest win in a decade, and the best start since 2001.

IOWA CITY – The final road game of the season for Clinton ended in a 56-0 shutout loss at Iowa City Liberty, leaving the River Kings without a notch in the win column this year.

On the very first play from scrimmage, Liberty scored. A 35-yard run put Clinton behind just 12 seconds into the game and it just escalated from there. They

The Lightning rushed over 300 yards in the first half alone against the River Kings, taking a 42-0 lead into the halftime break and coming out with continuous clock.

The River Kings end their season 0-8 (0-4) after an up and down season plagued with injury and low numbers.

MORRISON, Ill. – The state ranked Morrison football team continued to show their dominance in a 35-6 win over Orion to not only win the conference but also stay undefeated of the season.

Things started out slow for the Mustangs on Friday night against the Chargers, who have been in the Class 2A state rankings at different points during the season.

In fact, the Charger scored first, punching it in from the three-yard line at 8:38 in the first quarter.

The Mustang offense struggled, fumbling the ball four times in the first half and seeing Orion recover them all. The defense stepped up, though, not allowing any of those to be converted into points.

The Morrison offense broke through with a little over a minute remaining int he first half. The Mustangs took a 91-yard run all the ay through to take the 7-6 lead and they didn’t look back. Coming out of the locker room, they did the same thing. Morrison returned the kick off for a touchdown to take the 14-6 lead.

A 30-yard pass play, an 8-yard run and then a pick that was returned another 90 yard capped the Mustangs’ scoring efforts and their win.

The No. 4 Mustangs will now await their first round playoff opponent. They have sole possession of the Three Rivers Rock division with their 9-0 record.

STANWOOD – The Northeast Rebels were close all year, and pulled out their first district victory on Friday night at North Cedar.

The Rebels downed the Knights 39-28 in the final week of play.

CCA jumped out to a 35-7 lead before the Sabers started making their comeback.

The Sabers end their season 3-6 (1-3), with with four of their losses coming by two touchdowns or less. That included three 3-point or less losses to Camanche, Davenport Assumption and Iowa City Liberty.

The Morrison football team ended their season over the weekend in a hard-fought 20-13 loss on the road, knocking them out of the Class 1A Illi…