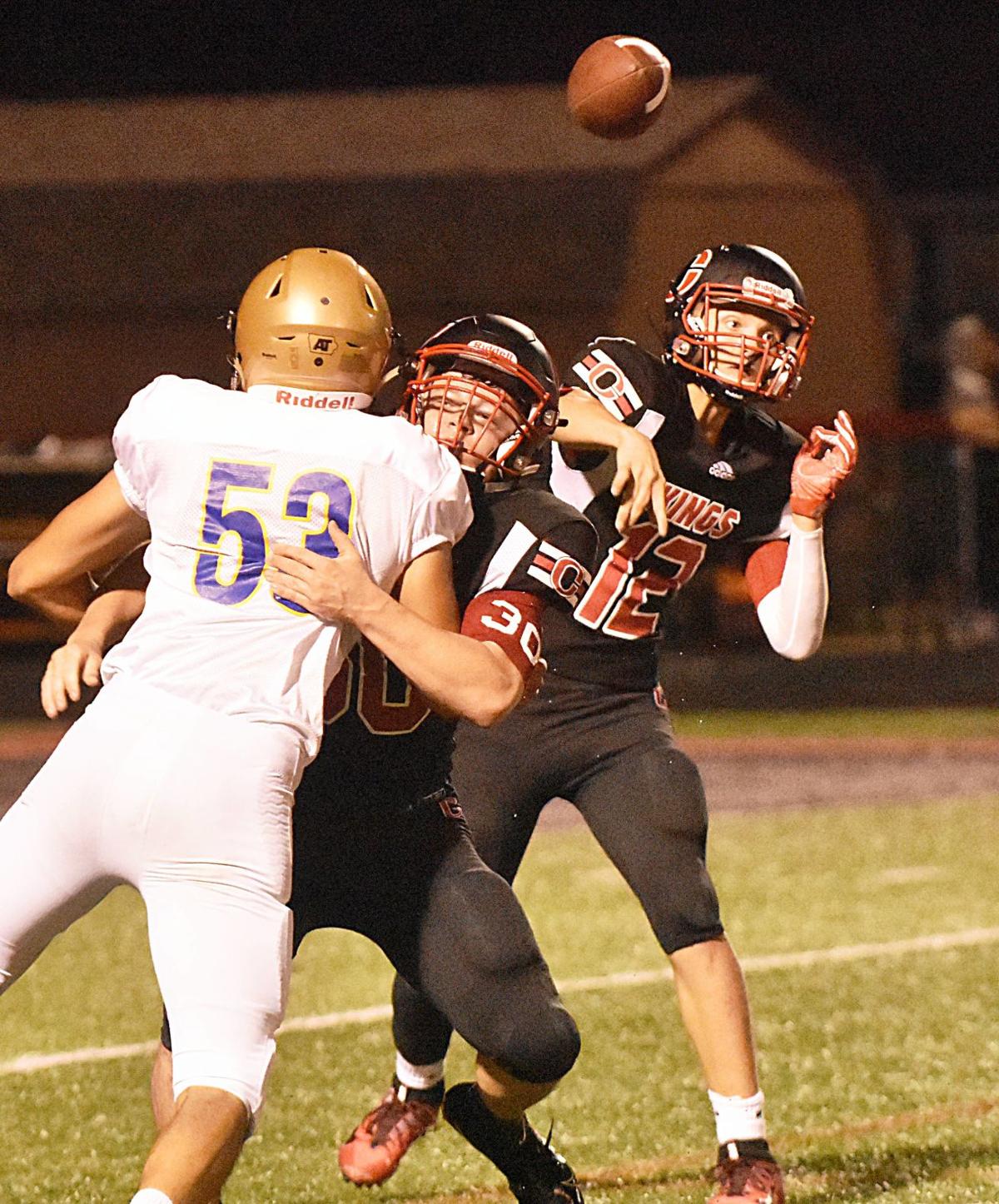 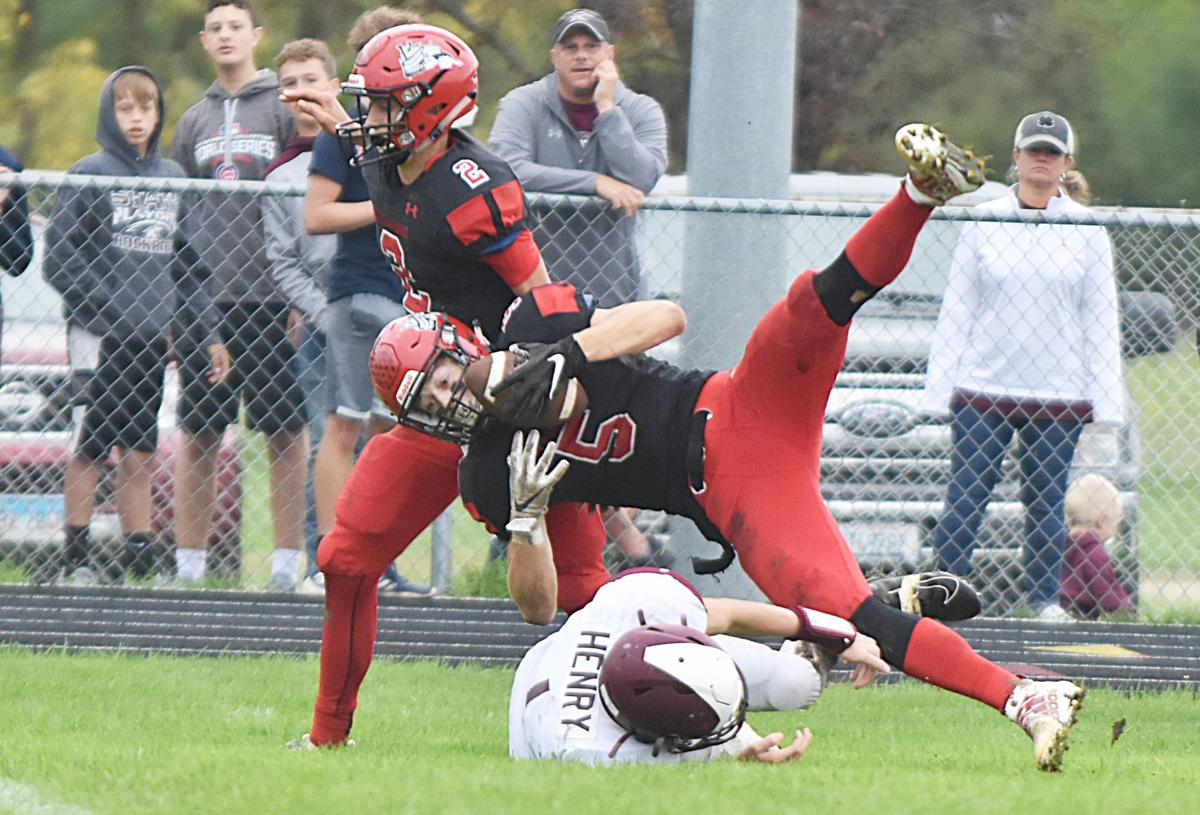 Fulton’s Jake Pannell flies over Rockridge defense after making a catch last Saturday. The Steamers visit No. 9 Orion this week after picking up a conference win last contest. 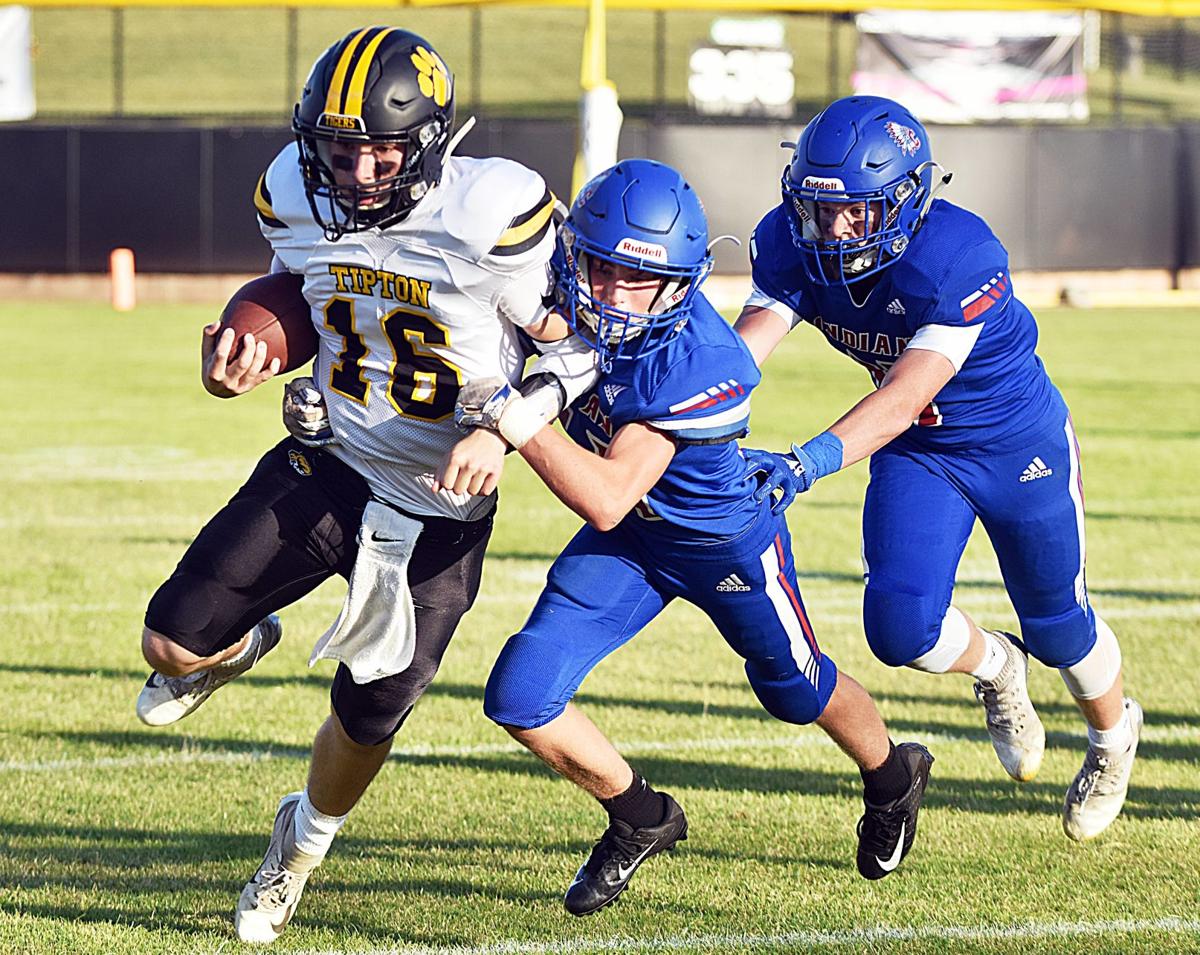 Fulton’s Jake Pannell flies over Rockridge defense after making a catch last Saturday. The Steamers visit No. 9 Orion this week after picking up a conference win last contest.

Area teams got their first taste of district football in Iowa last week, and for the most part it did not go well.

Camanche and Northeast both lost hold of their games in the second half as larger lines overran them. Clinton struggled to stop a Davenport Assumption team while Central DeWitt was dominated by a ranked North Scott program.

Easton Valley was even down at the half before upping the defensive effort to pull out a win.

On the Illinois side, both Fulton and Morrison came out victorious with big implications for both.

Week 6 brings a whole slew of tough matchups on both sides of the river, promising another week of exciting football for the Gateway Area.

Clinton sits in a notoriously tough district, there’s no question about it.

The River Kings were run over by a Davenport Assumption team last week, falling 55-7, putting up only 100 yards of offense altogether.

This week, they’re facing a tough Clear Creek-Amana team who sits at 3-2.

CCA’s quarterback Ryan Navarra has impressed so far this year, completing nearly 60 percent of his passes for over 600 yards and eight touchdowns. The River Kings struggled against the passing plays throughout the first part of the year.

Without wide receiver Logan Mulholland, who is out for the season, the River Kings will be looking for some offense generation from the likes of Ulysses Patterson (RB), Zach Hoffman and Seth Dotterweich (WR).

Camanche lost a tough game to Tipton last week to open up district play, and things don’t get easier in Week 6.

The Indians travel to Louisa-Muscatine, who is currently an honorable mention in the Iowa state football rankings. The 4-1 team has a quarterback – Chase Kruse – who has nearly 700 rushing yard along with his passing.

“They’re almost a mirror to Tipton,” head coach Dustin Coit said. “They have a really good quarterback who doesn’t throw much but is fast and runs hard. He’s going to get yards byt we have to stop big plays.”

The Indians will be welcoming two pieces back to the puzzle. Quarterback Jordan Lawrence, who missed almost the entirety of the last two games, will be back in the pocket for Camanche.

“He’s just an athlete,” Coit said about Henderson, who had the third most offense and second most tackles for the River Kings last season. “Really smart, he has a nose for the ball and he’s going to do a lot of stuff for us.”

The Rebels are looking at a good chance to take their first district game this year, and improve off of their one-win 2018 season.

Cascade is coming in looking like a similar team to Northeast. They have just one win on the season as well and rely heavily on their run game, only completing about six passes a game.

Northeast lost their game to Beckman Catholic last week after holding leads at separate times. The Blazers, who out sized the Rebels significantly, ran away with the second half.

“Our defense is playing really well,” head coach Mark Lee said. “They were some big boys and it just got out of our hands at the end.”

The defense still looked solid, including forcing a couple of turnovers that led to scoring plays for the Rebels. Lee wants to see more of that against the Cougars, especially when it comes to the run game. Colby Holmes has over 400 rushing yards for the Cougars and will be the one the Rebels will have to slow down.

“We need to keep doing what we’re doing and have the defense keep working,” Lee said.

FULTON AT NO. 9 ORION

Fulton got a much-needed win last week over Rockridge, but needs to see that continue.

They’ll have their hands full against a No. 9 Orion squad this Friday.

“The key is recognizing offensive formations and playing physical ball,” head coach Patrick Lower said. “We also have to prepare. I think the more we know the more competitive we’ll be with them.”

Lower touted a good week of practice after the Steamers’ win last Saturday, keying in on defense.

The Fulton defense had a number of impressive stops against Rockridge, but had moments where it collapse, including a lot of outrunning tackles.

“It’s just drilling it to death,” Lower said. “There’s not a day that goes by we don’t keep working on it.”

The No. 6 Easton Valley 8-man football team is on a tear, and they want to continue.

Although they went into the halftime break down last Friday while taking on Springville, they came out and dominated the second half. The defense allowed just 16 yards, propelling them to a victory 68-30 to stay undefeated on the season.

That adjustment at the half is part of the reason head coach Tony Johnson is so confident in his varsity roster.

“We can make adjustments and with our juniors and seniors experience, they can go with it,” Johnson said.

The River Hawks go on the road this week to face a 2-3 Central City team who likes to run the ball. Runningback Isaiah Damm has nearly 700 yards already this season.

“Their good runningback we have to stop,” Johnson said.

The No. 6 Morrison Mustangs have a fun night ahead of them on Friday.

The Bureau Valley Storm come to visit the Mustangs, who are coming off of a huge upset win over Sterling Newman that blasted them into the Illinois Class 1A State rankings.

Meanwhile, the Storm have yet to win a game.

The Mustangs have allowed just 22 points this season as a team. Read more about the Mustang defense in our football spotlight on Page C4.

Mary Corlis, 74, Ridgeville WI, formerly of Miles, IA, passed away June 1, 2020 at her home. She was born January 13, 1946 to Reno and Margaret Taplin. A future celebration of life will be held.

MORRISON [mdash] JOAN M. HEUSINKVELD, 87, of Morrison, IL, died Tuesday, June 2, 2020, at Resthave Home in Morrison, IL. There will be private family services. The Morrison Chapel of the Bosma-Renkes Funeral Home is in charge of arrangements. Joan was born May 4, 1933, in Fulton, IL, to Dona…