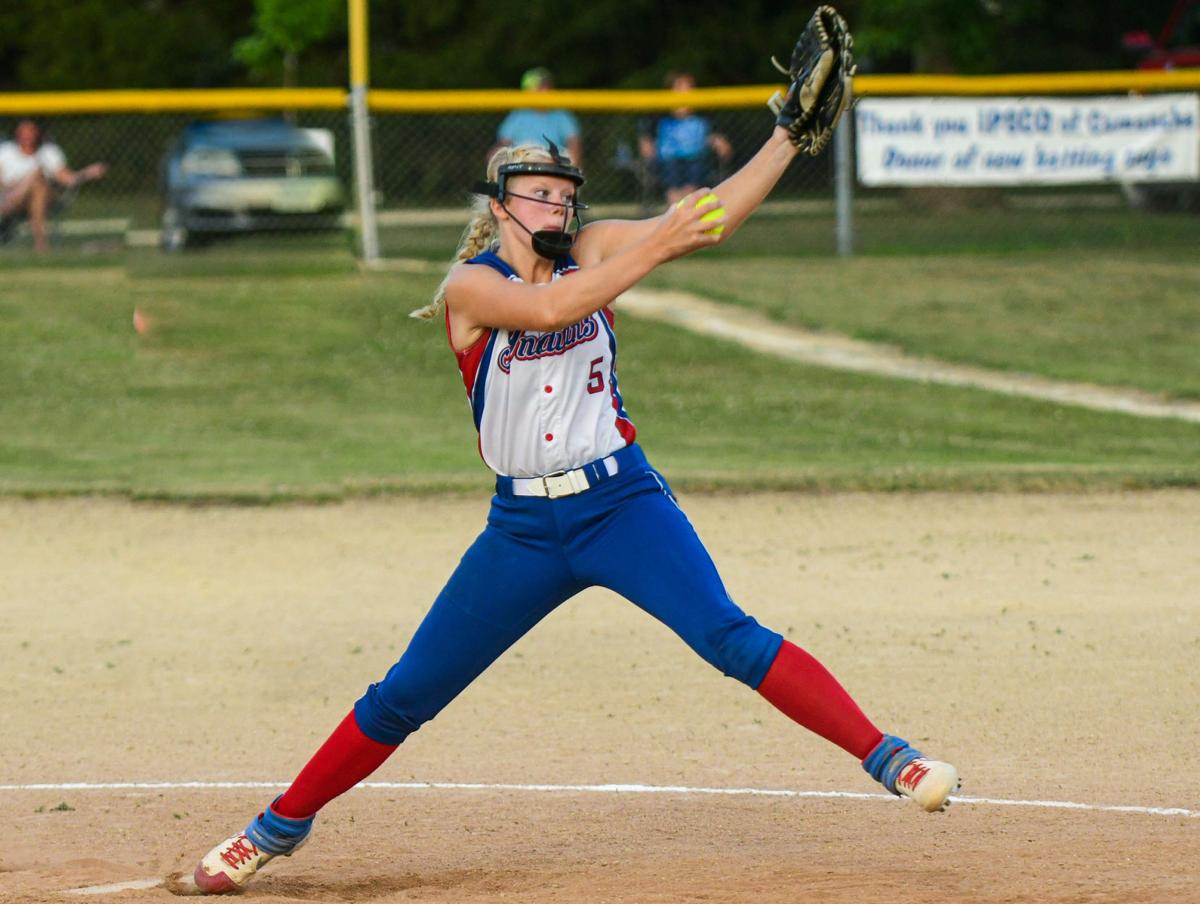 Camanche senior Tarah Wehde pitches for the Indians on Monday night, hitting 12 strikeouts to help lead them to a 12-2 win over Tipton. 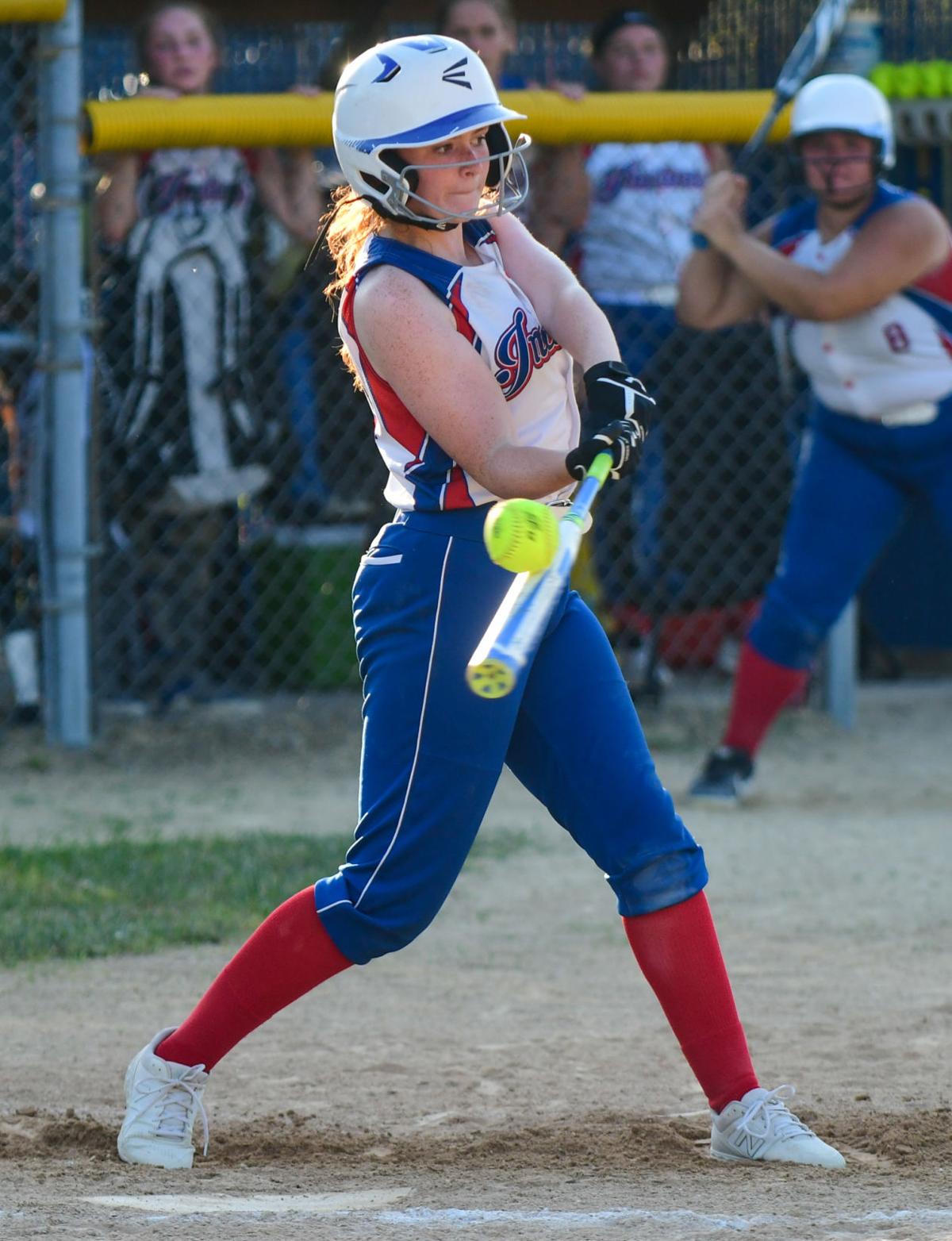 Camanche’s Maddie Sager swings at a pitch during the Indians’ win over Tipton on Monday. 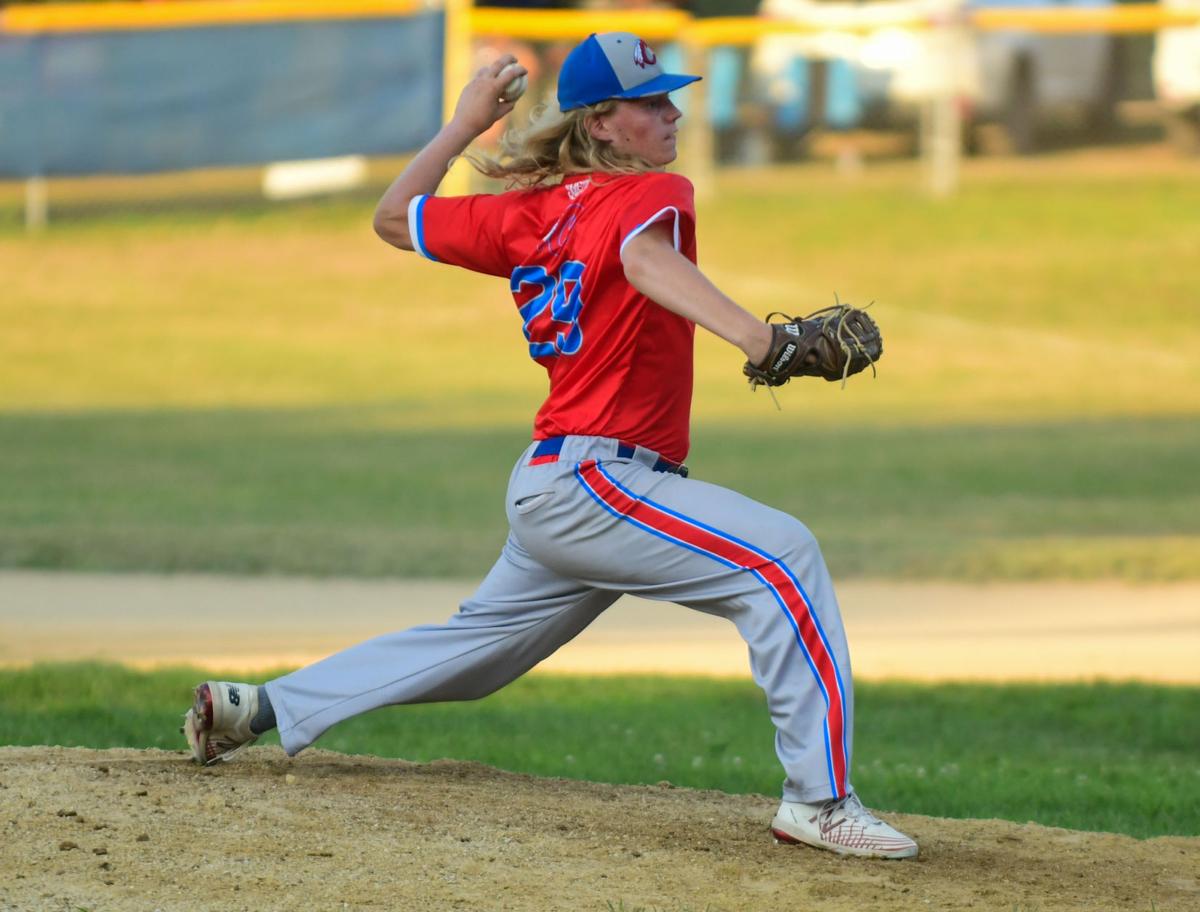 Camanche senior Mason McManus delivers a pitch during the Indians’ 10-5 win over Tipton on Monday night. 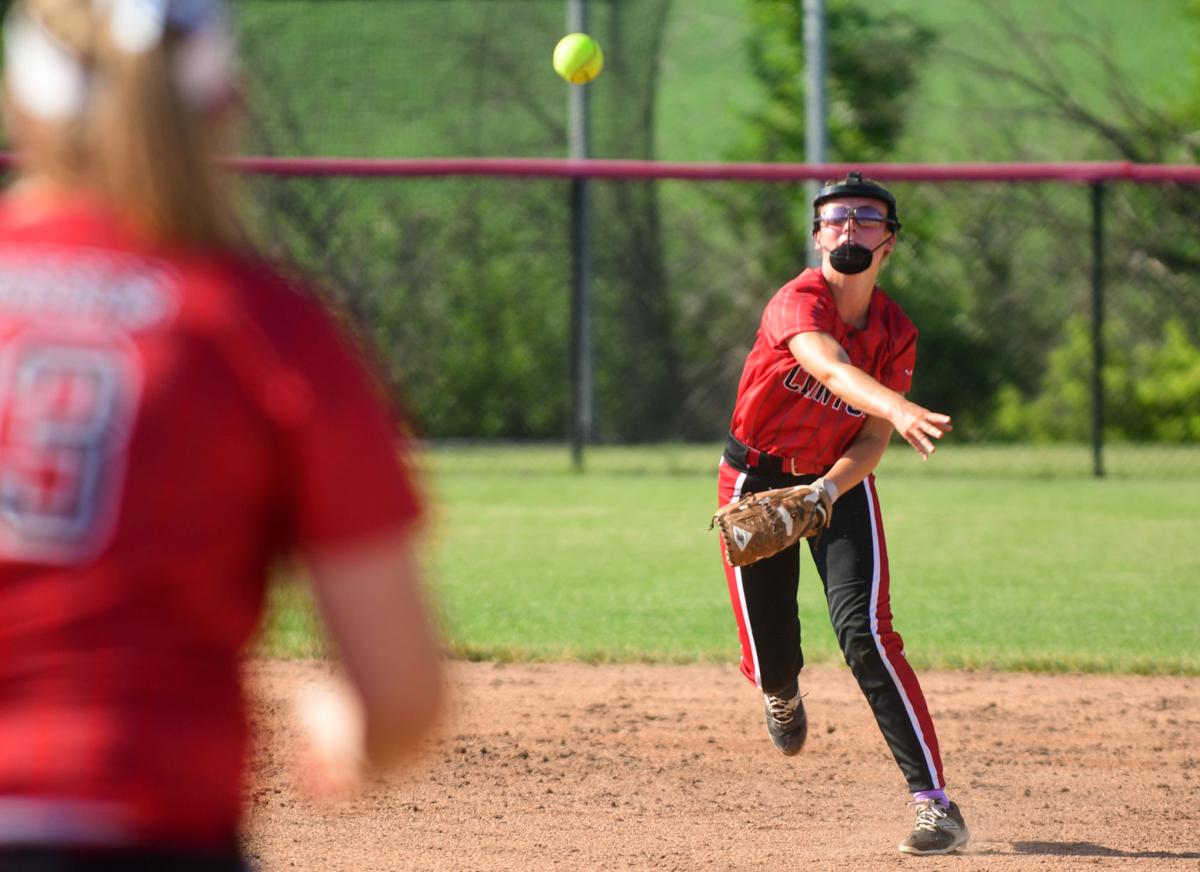 Clinton shortstop Ashtyn Dohrn makes a throw to Makenzie Cooley at first for an out during the River Queen’s doubleheader against Davenport West on Monday night.

Camanche senior Tarah Wehde pitches for the Indians on Monday night, hitting 12 strikeouts to help lead them to a 12-2 win over Tipton.

Camanche’s Maddie Sager swings at a pitch during the Indians’ win over Tipton on Monday.

Camanche senior Mason McManus delivers a pitch during the Indians’ 10-5 win over Tipton on Monday night.

Clinton shortstop Ashtyn Dohrn makes a throw to Makenzie Cooley at first for an out during the River Queen’s doubleheader against Davenport West on Monday night.

CAMANCHE – Camanche senior Tarah Wehde certainly made the most of senior night on Monday.

Wehde, the only senior on the team, pitched five innings against Tipton in Camanche to kick off the week. In those five innings, she sent 12 batters to the pines on strikes.

Her efforts helped the Indians beat the Tigers 12-2 for their third victory of the season.

“She came in this afternoon and you could tell her swagger, it was there,” head coach Andrew Carbajal said.

It was a lot of small ball for the Indians, starting with two consecutive singles in the first inning from Lauren Snyder and Jamie Robertson to put the first run on the board.

The bats really got going in the home-half of the third inning. Wehde helped her own case by kicking things off with a lead-off double. She was supported on the bases by three straight singles from Aubrey Carstensen, Snyder and Robertson. Abby Beal and Ella Blinkensop also singled and Camanche plated five runs in the third.

“The type of pitchers we’re seeing, knowing we can’t rely on home runs, we have to know our roles and what we’re doing,” Carbajal said. “We’re young and we’re working on the fundamentals of small ball because that’s how we’re going to win.”

The Indians kept scoring in the final two innings to end the game early.

“Our energy was really good tonight,” Carbajal said. “There was a good vibe, a good feel. Girls wanted to be here and we weren’t scared like we’ve been against some ranked opponents before. We were ready to hit.”

The Indians had a loaded front half of their schedule and are now moving into the last week of regular season play. Of their six losses, five came at the hands of teams that are still or were ranked in the top 15 at the time of play.

The Indians improve to 3-6 on the season and are looking at regional play, which starts next Wednesday against West Liberty.

CAMANCHE – It was a neck-and-neck game on Monday night at Gus Witt Field. That is, until the fourth inning.

Cade Everson stepped up to the plate and made contact with a pitch, watching the ball head to the scoreboard in left field. That homer cleared the bases and put the Indians up 9-5 on their way to a 10-5 win over Tipton at home.

“It was a big one right there,” head coach Darryl Cochran said. “He’s just one of those kids who goes out, plays his game, doesn’t say much and is pretty quiet. It’s exciting to see what he can do .... he amazes me almost every time he goes out.”

It was senior night for the Indians, and all of the seniors on the roster got playing time. That included a start on the mound from senior Ethan Buckley. Buckley was relieved after two innings by fellow senior Mason McManus.

All the seniors got on the field. That includes Ethan Buckley, Mason McManus, Caleb Delzell, Nolan Baker, Baily Rettkiowski and Brady Rettkiowski.

“It was nice to get some of those guys PT that don’t normally get it, Cochran said. “It was a good feeling, they did [a nice job].”

McManus allowed just three hits and no runs through the last five innings.

“Mason came in, shut them down, that was big for us,” Cochran said. “Defensively, I don’t think we had an error.”

The Tigers did come out and strike first, plating three in the top of the first inning. With two outs, Carter Christofferson came to the plate and doubled to left field to score two baserunners. Christofferson scored on a single from McManus on the next play.

Eventually, McManus came in on a wild pitch to give the Indians a 4-3 lead.

The No. 8 Indians improve to 10-3 (9-1) and will have a quick turnaround. They play a non-conference game against Bettendorf on Tuesday at Modern Woodman Park, the home of the Quad Cities River Bandits. The Indians will then wait to see who their first round district opponent is between Northeast and Durant.

“I think we’re starting to see our hitting come aorund,” Cochran said. “Kids have done a good job of going out there, plugging away. Some kids aren’t happy with where they’re at right now, but they have kids around them who can pick them up.”

The offense never clicked for the Queens. Their first run came in the fifth innings off a Lauren Brennan RBI, but the Queens were already trailing by eight by that time. The Falcons were making contact off Brennan’s pitches and placing them where the Clinton defense was not.

Clinton falls to 4-10 and will play a ranked Pleasant Valley team on Thursday night on the road before wrapping up their regular season against Bettendorf in a week.

Even the baseball team struggled with the Falcons in the Quad Cities. They fell 10-7 in Game 1 and barely got by with a 10-7 win in the second contest.

The River Kings had as much as a 10-3 lead in Game 2, but watched the Falcons’ comeback effort come closer and closer while their offense didn’t plate a run after the fourth.

Clinton’s record improves to 9-5 (5-5) and they turn their attention to another pair of MAC games on Wednesday night.

STANWOOD – The No. 4 Northeast softball team had no issues picking up another River Valley Conference win on Monday night, taking down North Cedar 15-1 in minimum innings.

The Rebels scored nine in the first two innings, then six in the third to take the game. Bree Mangelsen went 3-for-3 at the plate, driving in two runs. Audrey Morris finished with three runs batted in, and Makenna McDonals and Valerie Spooner each added another two.

Madison Kluever pitched three innings, striking out one and allowing one run on two hits.

The Rebels improve to 12-2 and will play Central DeWitt on Tuesday in Goose Lake for a non-conference twinbill.

It was a short regular season, but it ended perfect nonetheless. The River Hawks beat Midland 5-3 and 3-1 on Monday night to finish 12-0.

They will take on Marquette Catholic on Saturday for the first round of district play.