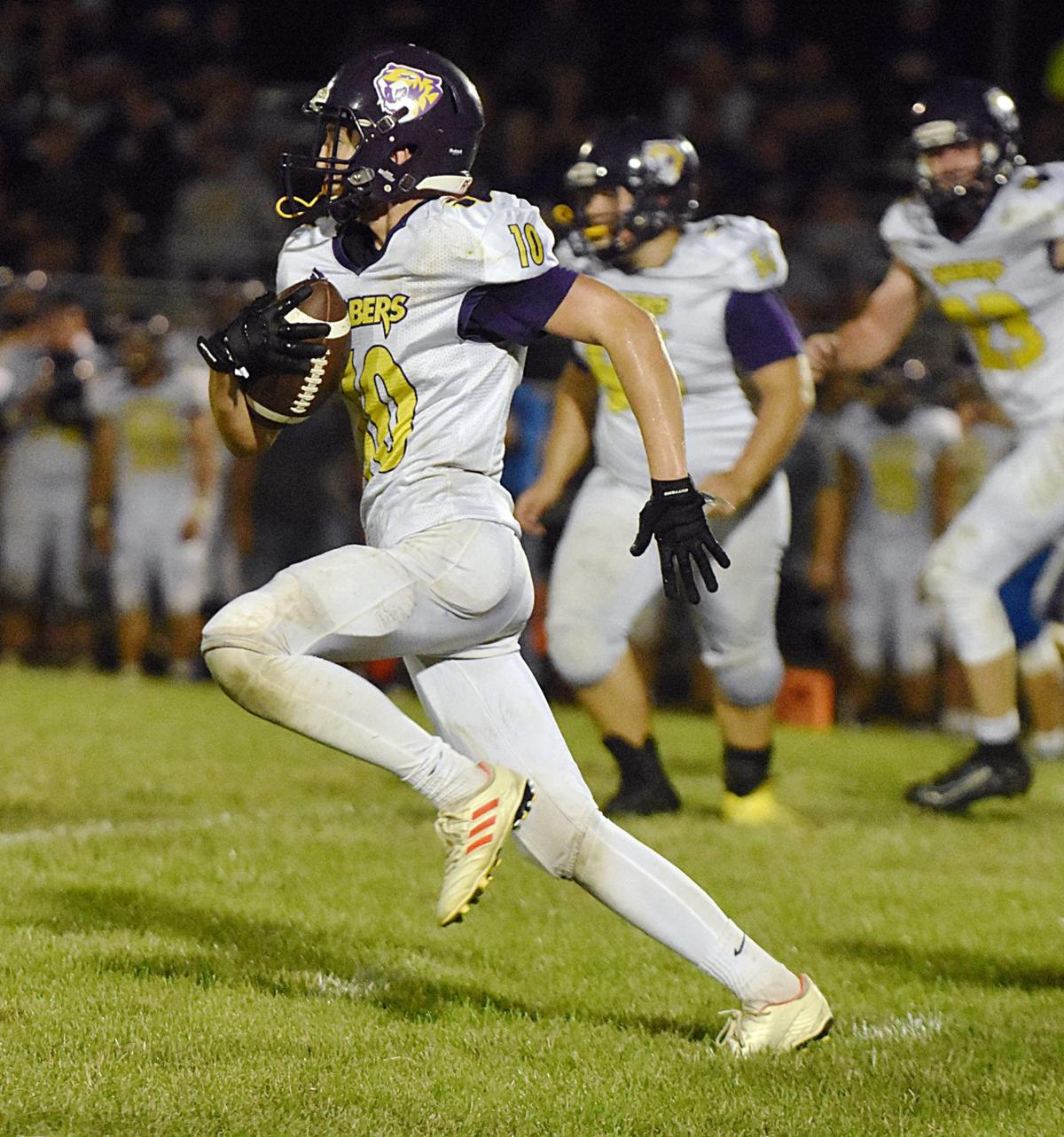 Central DeWitt’s Matt Roling runs with the ball during an earlier game with Camanche. The Sabers visit Clinton High for the Week 8 district match up. 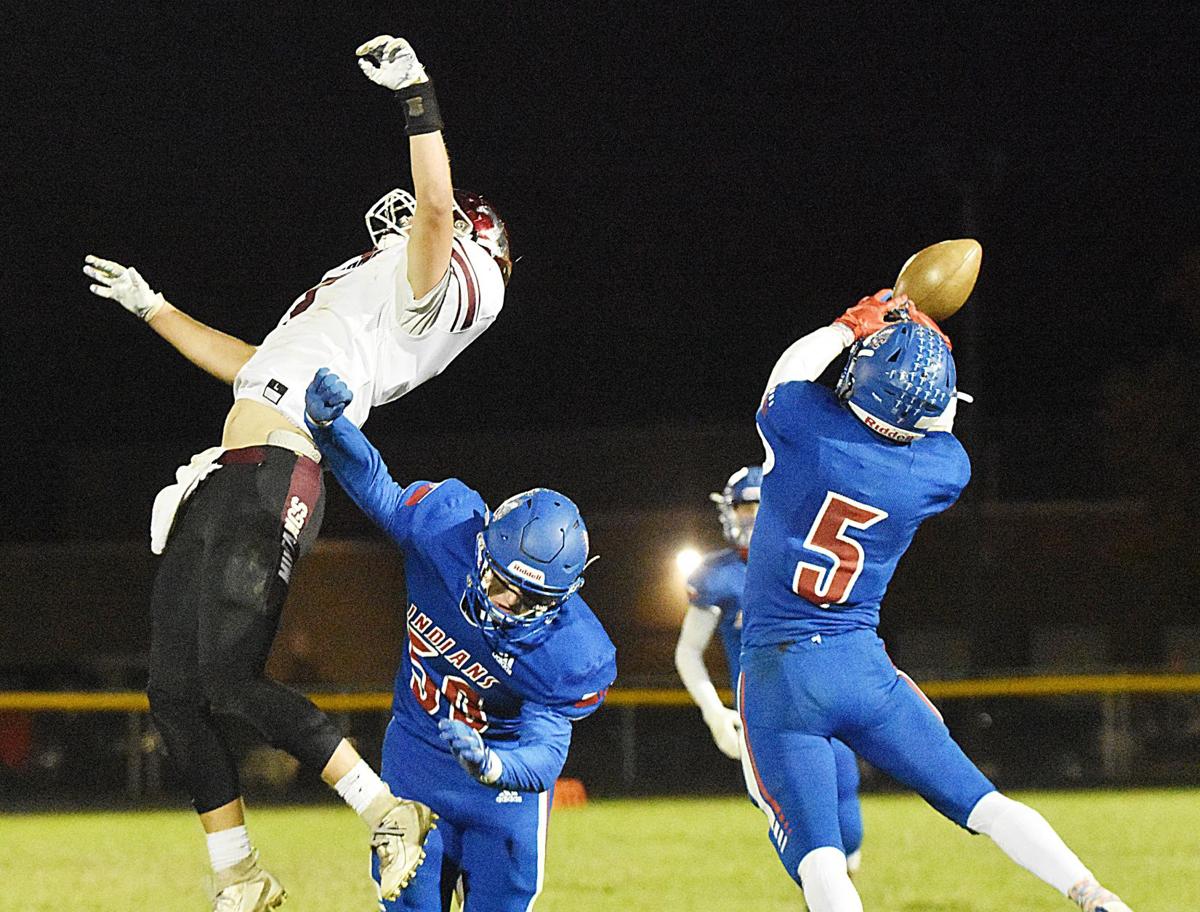 Camanche’s Cade Everson reaches for a tipped ball during the Indians’ win over Mount Vernon. They travel to West Liberty for Week 8 action.

Central DeWitt’s Matt Roling runs with the ball during an earlier game with Camanche. The Sabers visit Clinton High for the Week 8 district match up.

Camanche’s Cade Everson reaches for a tipped ball during the Indians’ win over Mount Vernon. They travel to West Liberty for Week 8 action.

With just two weeks remaining in the regular season, a number of teams are aiming to solidify spots in the postseason on both sides of the river.

Other teams are looking to notch a win before time runs out to end the season on a high note going into next year.

The Sabers are coming off of their fourth Consecutive loss. However, three of those four losses were by three points or less.

“We’re getting better and that’s the best part,” head coach Ryan Streets said. “The kids can see that. It’s frustrating of course when you’re losing games you could have won or should have won, it’s just stuff we have to work on.”

“It’s assignments – understanding where we’re supposed to be,” head coach Jon Wauford said. “In some instances we had some physical mismatches with our younger players.”

Both are looking to get in the win column, the Kings for the first time this year. They’ll be looking for offensive sparks from sophomore quarterback Jai Jensen, who has been looking comfortable in his role the last few games.

He threw for 100 yards against North Scott ad 150 at Clear Creek-Amana two weeks ago.

“The last couple days I’ve noticed things start to slow down for him and having more answers on the sidelines,” Wauford said. “He’s understanding things a little better and we need to do a good job of giving him time to throw.”

They just want to clean up a couple things.

“Every game we play we have gotten out to a fast start. We come out physical,” Streets said. “We need to continue that.”

“We have to execute plays. We have some serious mental mistakes at a bad times. We have to make sure to play through it and sometimes it really just is luck.”

As for the River Kings, they also have plenty to clean up. They’ve been revolved their lineup because of injuries, losing JR Wauford last week. Jasper Luckritz and Devan Gallant are back in the lineup, which gives it a new look and a new challenges for the team.

“We’re trying to get guys into the right spots,” Wauford said. “We’ve got to find somebody to come in for JR and things moved around with Jasper coming back. Our focus is making sure our guys know where they’re supposed to be.”

The Indians are coming off the biggest win in nearly a decade with a 45-10 slaughter of Mount Vernon last week, putting them at 5-2 and 2-1 in the district.

They’ve got a big test this week, facing a 4-3 West Liberty team in hopes of keeping an at-large bid for the playoffs alive.

“These are basically playoff games for us,” head coach Dustin Coit said. “It’s a huge game. They’re going to come ready to play.”

The Mustangs have nearly 1,000 rushing yards so far this season, led by running back Will Esmoil. The Camanche defense has looked good against the run game, but has to stop big plays from the Mustangs.

“They have a really good running back who is also a state runner-up wrestler,” Coit said. “We have to make sure to contain him. If we can stop the run we’ll be in good shape.”

No. 5 Easton Valley at No. 4 Turkey Valley

The River Hawks are still perfect on the season but see their biggest test of the year this Friday on the road.

“This is a team that was one of the teams that went 8-1 last year in the district and had everyone coming back so we knew they’d be good again,” head coach Tony Johnson said. “We knew they were winning every week.”

Turkey Valley is the last remaining undefeated team besides Easton Valley in the 8-man district, and has proved dominant so far. They’ve won every game by a margin of 34 or more, and use heavy rushing yards to do it. Two of their backs have over 600 yards on the season, ranking them both in the top five rushers in the district.

Close behind them, though, is River Hawk senior Braydin Farrell. Plus, Nate Trenkamp is dominating the game in the air with 500 more passing yards than any other quarterback in the district.

The Easton Valley offense is the third most prolific in the entire state, all classes. Their defense will have to step up to take down Turkey Valley.

“The kids know what’s in front of them,” Johnson said. “We’ve game planned really well this whole year and the kids really trust that. This week is no different, they’ve bought in and they know what they need to get done.”

The Rebels still have just one win on the season, but they are hungry for another.

They’re coming off of a tough shutout loss to a ranked West Branch team.

“We had some opportunities but made some mistakes at times that cost us,” head coach Mark Lee said. “They’re an aggressive team and it boiled down to making plays.”

The Rebels’ offense has been improving every game out thanks to quarterback Riley Wolfe. The defense has let some big plays through, and will need to find some consistency against a run-heavy Bellevue squad.

“Defensively we need to tackle better than we did a week ago,” Lee said. “All in all, it’s a very good matchup between the two,” Lee said. “We need to execute and take care of our mistakes and let the chips fall where they made.”

The Rebels are trying to pick up a district win before the end of the season, the Bellevue game being their last chance to do it in front of their home crowd.

“They’re motivated,” Lee said. “I know last week was tough and we didn’t play our best and shot ourselves in the foot a couple times. A good week of practice here and focused and hopefully coming out with a W.”

The Fulton Steamers became playoff eligible last week with a good, solid win over Riverdale, but they’re continuing to push towards the end.

They jumped out to a fast start offensively, holding the Rams to just a few late scores.

“Defense played very well and helped us get up there quick,” head coach Patrick Lower said.

The 5-2 Steamers take on a 5-2 Hall team who is very comparable to their own team. Hall has given Fulton trouble in the past with a notoriously solid football program.

“They’re a physical football team,” Lower said. “They have a very good line up front, good sized and they’re all seniors. They’ve played a lot of football together and a very veteran group.”

Hall only puts the ball in the air a handful of times each game, relying a lot on their running backs.

The Steamers also have a solid run game with Kyler Pessman and Ethan Rash, but also have quarterback Conner Barnett to pick up solid yards.

“I think both teams are very evenly matched,” Lower said. “Both teams have good running games and backs that run hard. The passing games are pretty equal as well.”

Lower says the key in keeping their opponent to small plays. The talent in the backfield leaves the Steamers trying to stop big plays.

“I want to see more of the same stuff [as last week],” Lower said. “These guys have a lot of speed at the running back position. If we don’t set the edge on the outside they’re going to get outside and get a lot of yards on us. We’ve talked about angles all week because these guys are fast enough to make us look slow.”

No. 4 Morrison at Rockridge

It was a second consecutive shutout for the Morrison football team last week against Erie-Prophetstown and the fifth in a row where no touchdown was allowed.

Their defense is just too good.

“They’re playing well,” head coach Ryan Oetting said. “All I want is for them to play well, get to the football and be aggressive and so far we’ve been doing that.”

They’re facing Rockridge on their homecoming and Senior Nights. Rockridge is vying for their own spot in the playoffs, and have some extra motivation. Although they sit at 3-4, they have potentials to break away for big yards, especially on the pass play.

“We spent some time working a little extra working on some extra pass defenses but we’re not going to reinvent the wheel,” Oetting said. “We’re just going to play football.”

Their Week 9 opponent is the ranked Orion Chargers, one of the toughest opponents on the season. However, Oetting preaches one game at a time and says the looming opponent isn’t on his teams’ minds.

“We’re focused on Rockridge right now,” Oetting said. “The kids have bought into that all year. We play one game, one week at a time, one practice at a time.”